This content is taken from the Griffith University's online course, Exploring Economics: Will the Next Generation Be Worse Off?. Join the course to learn more.
View course
1.21 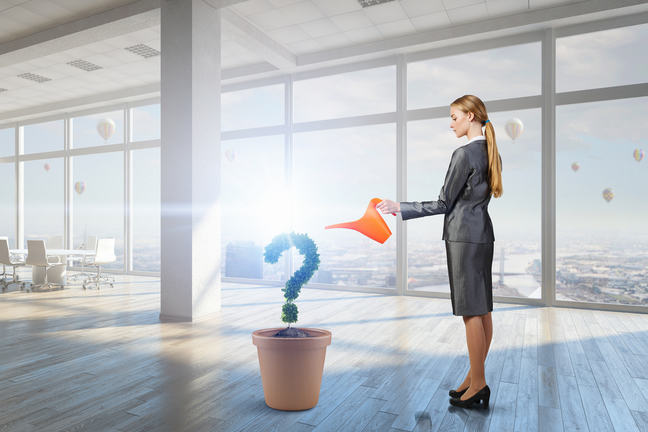 Nothing in life is inevitable, except death and taxes as the old joke goes. Even so, some things are a very safe bet and future growth is one of them.

Sure, there are times when productivity growth (which drives growth) comes to a halt for periods lasting up to several years or more. This is alarming at the time and we then hear various explanations trying to convince us that this is the new, normal state – that growth has stopped permanently. The problem is that these explanations have always been wrong.

Take the famous ‘limits to growth’ debate of the 1970s. The Club of Rome, a global think tank, published a famous book in 1972: The Limits to Growth, which predicted world economic growth would stop permanently by the end of the 20th century. The reason given was that rapid population growth would place a huge demand on resources which would run out even with improved technology designed to solve this issue. What happened at the end of the century? Our world economic growth survived and remained robust.

The respected International Monetary Fund’s (IMF) forecast for world growth in 2017 is 3.5%, up from 3.1% in 2016 and is expected to be even stronger at 3.8% in 2018. Part of this is simply the effect of more workers producing more output, but importantly, part of it is ongoing labour productivity growth.

The chart below shows world economic growth since 1980 and the forecast to 2022 from IMF data. In only one year – at the depths of the global financial crisis in 2009 did growth slip below zero and then only just. The IMF’s forecasts are short term - they do not say anything about growth in 20 or 50 years. No international agency is prepared to forecast a growth rate that far into the future. But nor do they offer a view that economic growth will stall in the long run. 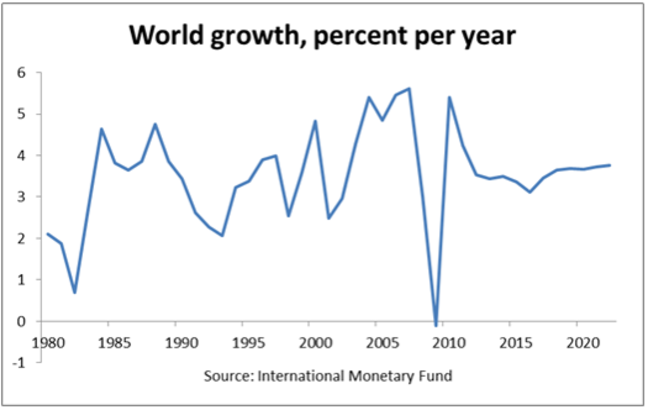 This does not mean that there are no downside risks – that nothing could go wrong. There are, and it could. However there are upside risks too – things that could turn out better than expected.

Let’s take the downside first, where it is clear that the greatest risks are not those of finite resources which was the basis of the ‘limits to growth’ thesis. Rather, geopolitical risks, financial risks and environmental risks are greater than the risk that we will simply run out of resources.

On geopolitical risks, the World Economic Forum 2017 identified a trend towards weakening global cooperation, citing in no particular order of importance: the exit of major nations from the Trans-Pacific Partnership and the Trans-Atlantic trade and Investment Partnership, the U.S. withdrawal from the Paris Climate Change agreement, China’s rejection of the international tribunal on the South China Sea, ongoing Middle-East tensions, North Korea’s nuclear ambitions, and tensions between Russia and the U.S. These factors could derail global growth through a range of possible channels, such as weakening global trade and capital flows.

The medium to long term financial risk arises from the growing indebtedness of national governments and also the private sector in some countries (notably Australia). Government debt has increased substantially as a share of the economy in almost all advanced countries over the past 20 years and has reached the point in many countries where it could only be reversed by extremely painful and politically difficult cuts to spending or increases in taxes. Such adjustment itself reduces economic growth, but such high levels of debt make countries vulnerable to credit rating downgrades which raise the cost of borrowing to not just governments but households and businesses and which in turn lowers growth.

There are also many environmental risks to world growth, particularly the effects of global warming and the related risk of long term water shortages, floods and bushfires.

So, yes there are plenty of downside risks to long term growth but there are equally plausible upside risks, particularly the digital revolution which could turbo charge growth. For example, the sharing economy - through the likes of Uber, Airbnb, TripAdvisor, Wotif, eBay and so on – are already driving consumer prices down through competition among all sellers which forces them to find ways to cut costs in order to maintain their margins. Lower costs are the flipside of higher productivity.

Let’s stop and think about this for a moment: this relationship between costs and productivity is important, because while we cannot always see productivity improvements by observing them, we can often infer them when we observe lower costs per unit of output.

To see this, let’s take a simple example. Suppose you are a hotel selling 100 rooms at an average price of $200 per room per night, and you employ 40 staff and pay each of them on average $100 per day, and your overheads are $6000.

So lower costs are often the flipside of higher productivity. In many complex real world businesses it is harder to calculate productivity than costs but we can often infer one from the other.

Do you agree that future growth is inevitable now that you have read the argument presented? Share your thoughts in the discussion below.