This content is taken from the Colorado State University's online course, The Fall of the Roman Republic. Join the course to learn more.
View course 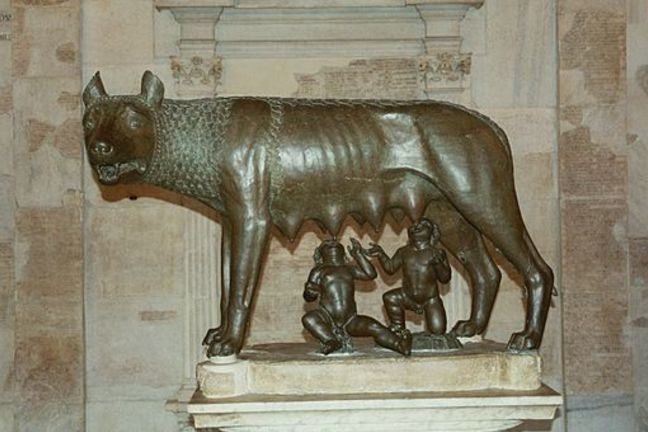 Foundation of Rome and The Kings

There are two key myths regarding the foundation of the city and the people of Rome – one surrounding the tale of Aeneas and the other of the twins, Romulus and Remus. Because of the traditional mythical elements, it is argued that the Romulus myth is the older of the two, even though the dramatic date of the Aeneas myth comes before the events of the Romulus myth. These two myths tell us a great deal about Roman values and the establishment of the Roman Kingdom. First we will briefly examine the Romulus myth.

According to tradition, Romulus and Remus were born in Alba Longa, a city in the region of Latium and near the future site of Rome. Their father was the god, Mars, and their mother, Rhea Silva was the daughter of the king of Alba Longa. However, Rhea’s father was deposed by his brother and viewed his nephews, the twins, as a threat to his rule and so he had them thrown into the Tiber River. The young boys washed onto the shore and were suckled by a She-Wolf before being found by a shepherd, Faustulus. He raised them as his own, but their noble birth and leadership skills outshone their supposed humble beginnings. Their true identity was revealed and they helped settle the disputed kingship in Alba Longa. Afterwards, they returned to the banks of the Tiber River to found their own city. A quarrel between the two brothers – given variously in our sources – resulted in Romulus killing his brother Remus and establishing the city of Rome. The traditional date is April 21, 753 BCE.

This story has all of the trappings of a traditional tale – an old ruler threatened by the new generation, attempts to secure one’s rule by throwing youths into the river, mistaken identity rediscovered, and the youths returning to claim their birth rites. This reminds us probably most famously of the Moses story in the Old Testament. As such, it is thought that this is the original foundation myth of Rome.

However, another myth was created later as Rome began to exert influence throughout the Mediterranean. The Romans were well aware of the Greek legends of Troy and wanted to graft themselves onto a large Mediterranean history. After all, Rome was only founded in 753, and the Greeks had been fighting wars for hundreds of years already. The Romans wanted to tap into this ancient pedigree. The story of Aeneas comes from Virgil’s Aeneid, and was written in the first century BCE. It is no wonder, as we shall see that the Romans at this time wanted to deemphasize the fratricide that began Rome in their original foundation myth, considering all the civil wars that will unravel the Republic at that time. The new myth was far more in line with the contemporary, international Rome. Aeneas was one of the few Trojan survivors after the Greeks sacked the city during the Trojan War. He sailed throughout the Mediterranean looking for a place to settle. After a brief stay in Carthage with Queen Dido, he landed in Italy. He met King Latinus and won his daughter’s hand in marriage. Their descendants would eventually become the kings of Alba Longa, including Rhea Silva, Romulus and Remus. Thus, Rome extends its illustrious history – Aeneas founded the Latin people, and Romulus founds the city of Rome.

Romulus ruled as the first king of Rome and is attributed with the foundation of the city, the senate and many of the military traditions of Rome. After Romulus’ rule, there were six other kings who ruled as monarchs in Rome - Numa Pompilius, Tullius Hostilius, and Ancius Marcius (together called the Latin or Sabine Kings), followed by Tarquinius Priscus, Servius Tullius, and Tarquinius Superbus (the two Tarquins were Etruscan). Our sources for the life and careers of these man are all centuries later and so the details are quite uncertain. Suspicion is added because there are only seven recorded kings, which ruled over a period of 245 years, which gives an average of about thirty-five-year reigns. This is not impossible, but quite unlikely. To compound the issue, each king is said to have contributed entire institutions to Rome – Romulus founds the city and creates the Senate, the second King Numa Pompilius bestows upon Rome all of its religious institutions. These types of development are more likely piecemeal, over a long period of time, rather than made by a single person.

So, although the historical realities of Rome’s origin and early years are uncertain, these myths give us a good window into Roman values – military prowess, family, and tradition are all important to the Romans. Sadly, archaeology cannot really confirm nor deny mythology or legends, and so the nature of our sources for this and the remaining periods is worth keeping in mind. Livy and his use of myth as history will be the topic of the discussion for your next activity.

In what ways can myth be used to understand the historical realities of Roman society?