0:08Skip to 0 minutes and 8 seconds Welcome to the Wall. My name is Ian Haynes. I’m Professor of Archaeology at Newcastle University, and over the next few weeks, my colleagues and I are looking forward to exploring this, the Roman Empire’s most heavily defended frontier, with you. Hadrian’s Wall is more than just a wall. It’s, in fact, part of a complicated system with forts, milecastles, turrets, outposts, and watch stations, all of which provide a unique glimpse of ancient society. In addition to housing one of the largest concentrations of Roman soldiers to be found anywhere in the empire, Hadrian’s Wall was home to a remarkably cosmopolitan array of civilians. Together, therefore, we’ll study not just the buildings, but also the diverse frontier communities that lived in and alongside them.

0:59Skip to 0 minutes and 59 seconds And in the process, we’ll discuss how we know what we think we know and how much more there is to discover. Throughout this course, we’ll learn together how to read ancient sources, and we’ll also explore the various archaeological skills and methods that have allowed us to make some of our greatest discoveries. Each week, we’ll look at a different aspect of the Wall’s story. In week one, we’ll look at the background to Hadrian’s Wall. We’ll look at what was going on in the indigenous population in the area, the arrival of the Romans, and we’ll look at the so-called Stanegate system, Rome’s first series of outposts on the Tyne-Solway corridor.

1:40Skip to 1 minute and 40 seconds There, we’ll look at evidence from Vindolanda and see what the famous tablets actually tell us about life on the frontier prior to the construction of Hadrian’s Wall. We’ll end week one with a look at the construction of the wall itself. In week two, we’ll be looking at the Roman army, a major force for change, and we’ll be looking at it not simply as a military fighting organisation, but also as a very complex community. And in the process, we’ll be showing you images and aspects of the Roman army that may be quite surprising and unfamiliar.

2:15Skip to 2 minutes and 15 seconds We’ll end our session in week two by looking very directly the effects of some of the army’s violence when we examine a cold case, a decapitated head found on the Roman frontier. Important as the army was, it was only part of the population of the frontier zone, so in week three, we’ll widen our understanding, looking at the complex interplay between soldiers and civilians, and understanding what was a frontier community in Northern Britain nearly two millennia ago. In week four, we will shift our focus to look at ritual and religion on the Roman Wall.

2:55Skip to 2 minutes and 55 seconds We’ll encounter some of the familiar Roman deities, but we’ll also see a whole range of deities, some of which only existed or are only attested in the wall zone. We’ll look at how worship was conducted, we’ll learn to read some of the texts that were so important to religious devotees, and we’ll also explore the growing impact of Christianity on the Wall itself. By week five, we’ll already have a good sense of the early history of the Wall, so it’s time to look at the less frequently studied later history, a period of conflict and consolidation that characterised the third and fourth centuries. During this week, we’ll give you a sense of a very different Roman society.

3:34Skip to 3 minutes and 34 seconds You’ll be participants in one of our special seminars in which our graduate students actually recreate a dining experience on the Roman frontier in the fourth century. And then in our concluding week, week six, we’ll actually look at the history of the Wall after the Romans. We’ll explore what happens during the so-called Dark Ages, and we’ll actually see something of how various generations struggled to interpret and understand the Wall. We’ll end with a discussion of the future of the Wall. What do we need to do to care for it, what mysteries are there left to address, and how should we study it in the future?

4:14Skip to 4 minutes and 14 seconds So to keep things interesting throughout the six weeks, we’re going to be confronting you with a range of different challenges– discussions, quizzes, and opportunities to encounter and experience different kinds of archaeological method. We’ll even be including certain elements of forensic analysis in our cold-case case studies. I’m looking forward to this journey. I hope you are too.

Life and death on Hadrian’s Wall: an introduction to Hadrian's Wall - Life on the Roman frontier

In this course we are going to confront the remarkable story of Hadrian’s Wall. 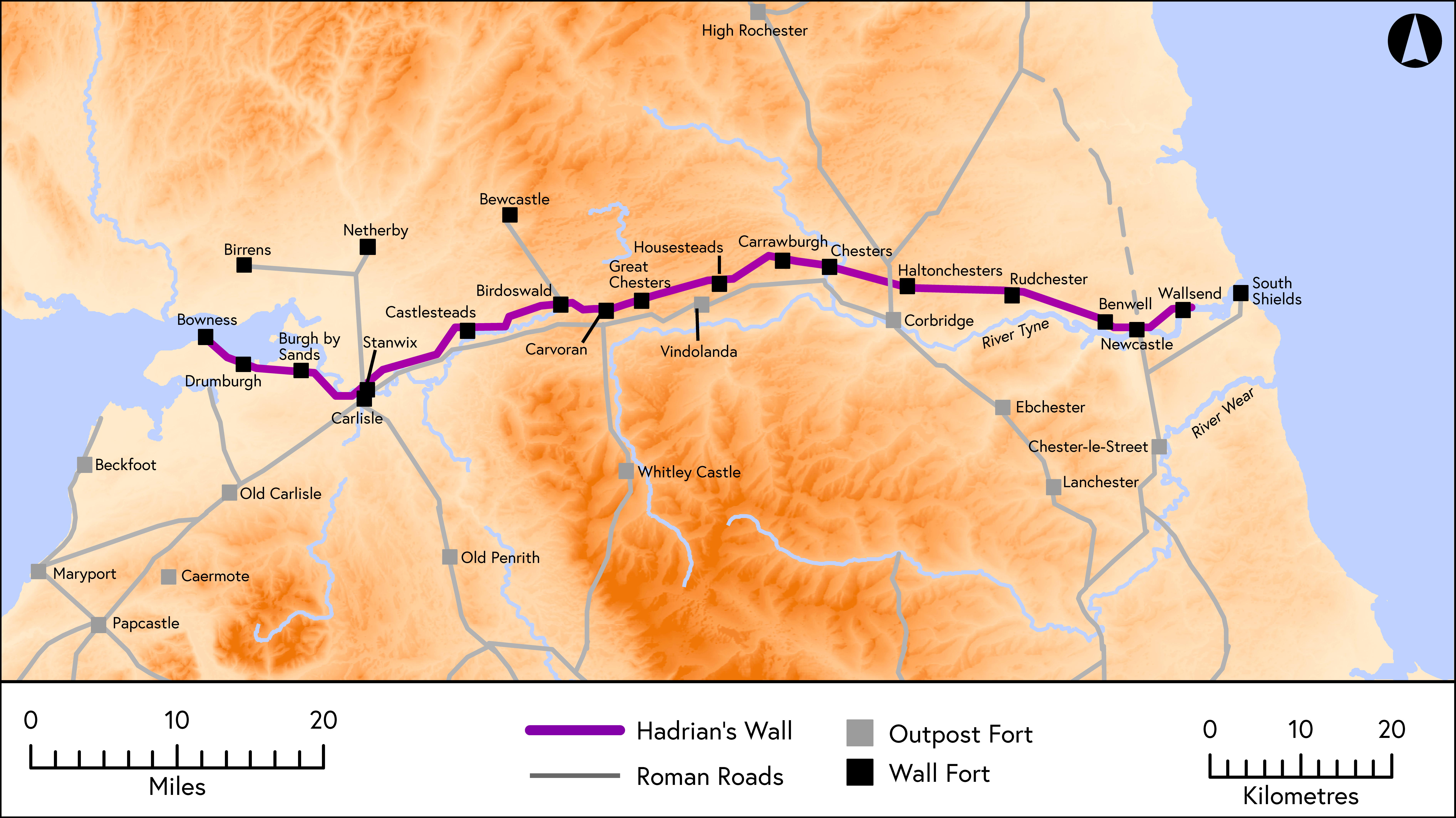 The route of the Wall © Newcastle University

Notes for this course