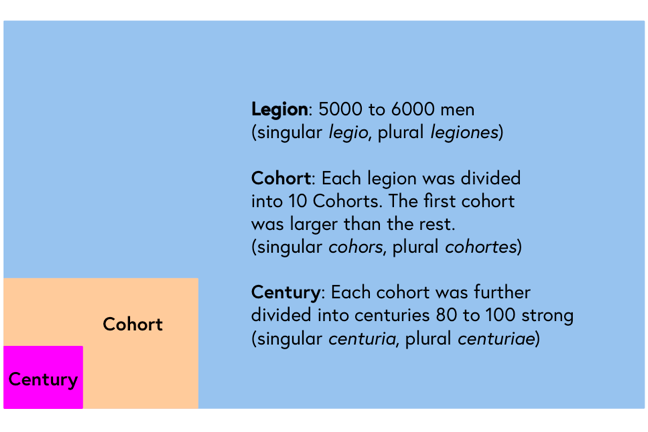 Relative numbers of men in a legion, cohort and century

The organisation of the Roman Army under the early Empire

Auxiliary soldiers could only be recruited from free born men (ie they could not be slaves or former slaves), but unlike the legionaries they were NOT required to be citizens. To appreciate how Rome’s armies worked under the early empire, it is necessary to understand two defining attributes of Roman society: firstly, citizenship and secondly, the emperor’s relationship with his armies.

First, Roman citizenship. It was possible to become a citizen, you did not have to be born one. This approach to identity played a vital role in determining the growth and character of the Empire, though it lost much of its significance when in AD 212, the Emperor Caracalla passed an edict (the Constitutio Antoniniana) extending citizenship to all free born subjects within his dominions. The distinction between citizens (those with a privileged legal status) and non-citizens was important, but there were recognised ways in which people could acquire citizenship. One of these was military service.

Second, the emperor’s relationship with his armies was a central theme of Roman history. Soldiers swore their military oath to the emperor and served his interests. That was their primary role; the defence of the provincial subjects was not a priority unless it served the emperor’s wishes. Much of the Empire’s tax revenue went to paying for this military.

The distinction between citizen and non-citizen that ran throughout the Empire also informed the organisation of Rome’s armies. In theory at least, only citizens could serve in the emperor’s Praetorian Guard (his bodyguard), and the legions. Yet more than half of Rome’s land forces consisted of auxiliaries, a term seemingly coming from the notion of ‘helping forces’. To join these one did not have to be a citizen.

The legions (formations of citizen infantry) were between 5,000 and 6,000 strong. During the first century of conquest the Empire had approximately 30 legions (sing. legio, pl. legiones), each strategically located. Each legion was divided into 10 cohorts (sing. cohors, pl. cohortes), the first larger than the rest. Each cohort was in turn subdivided into centuries (sing. centuria, pl. centuriae) which in practice often fell short of a literal century of 100 men. Most were probably about 80 strong.

A legion was commanded by a legionary legate, drawn from the highest echelons of society (the Senatorial Class). The legate would not have been a career soldier. He would have seen his command appointment as a step in a wider career that involved periods in diverse civil and military roles. He was in turn supported by tribunes, and centurions (sing. centurio, pl. centuriones). Many centurions came up through the ranks. They had their own complex hierarchy with the primus pilus being the senior centurion of the legion. Distinguished by their vitis, or cane of office, the centurions were generally career soldiers. Each centurion had a second in command or optio, whose badge of office was a long cane with a knob at one end.

It is often imagined that because they were formed of Roman citizens, the legions that came to Britain were full of Italians – they were not. Most were composed of soldiers drawn from citizen communities outside Italy. Quite a number, for example, came from Gaul and Germany. The crucial issue was not place of birth, but citizenship.

Auxiliaries served in a range of smaller formations commanded by prefects or tribunes. There were cavalry regiments (sing. ala, pl. alae) which were subdivided into troops (sing. turma, pl. turmae) under not centurions, but decurions (sing. decurio, pl. decuriones). Infantry units (sing. cohors peditata, pl. cohortes peditatae), were organised much like infantry cohorts, and mixed units of cavalry and infantry. A mixed unit or cohors equitata (pl. cohortes equitatae), was an adaptable formation well suited to a range of frontier tasks, but their cavalrymen did not enjoy the same status as their counterparts in the alae. Cohorts and alae came in two broad sizes, nominally 500 strong (quingenaria) or 1,000 strong (milliaria). Their organisation as we understand it is summarised below, but we should assume that there was considerable variation even within unit types.

Theoretical strength of auxiliary units under the Principate (based on Haynes 2013, p. 53 after Breeze and Dobson 2000, p. 161, but with adjusted figures for turma strengths). Each helmet represents a century of 80-100 infantrymen and each horse represents a turma of 30-36 cavalrymen.

Alongside these different types of unit, another formation emerges in the late first century, the numerus (pl. numeri). We still know little about these entities. The very vagueness of their title (numerus simply means unit) compounds our ignorance. They vary considerably in size – some as small as 200 men, others perhaps with ten times that number. They appear to be drawn overwhelmingly from non-citizens on the edge of empire or sometimes even from beyond the frontiers.

Having looked briefly at the organisation of the Roman army in the first and second centuries AD, we are now ready to look at how its soldiers would have appeared. We will start by looking at their equipment, and then go on to view the monuments they erected to commemorate their fallen comrades.