0:15Skip to 0 minutes and 15 seconds Anyway, here we are at Milking Gap. What is actually happening with Roman-native relations in this area? Well, there’s actually a long history of study of this question. The great George Jobey did a huge amount of fieldwork looking at Late Iron Age settlement in the northern frontier zone. And one of his boasts, which might alarm some of us in many respects, was that he could get the archive from every one of his excavations– or each excavation– into a shoebox. Because in terms of actual finds that came from these sites– the native sites, as it were, the Iron Age indigenous sites– there were relatively few objects coming up.

0:52Skip to 0 minutes and 52 seconds Now at that time, that posed certain significant problems for those seeking to look at Roman-native interaction, because for them, one of the ways of determining whether something was contemporary with Rome– and therefore could have any kind of relationship with Rome or not– was the presence of imported Roman objects. So if sites are materially poor, it becomes quite difficult to determine that. Now of course, since then we’ve had a major revolution– and now an ancient revolution, it seems– in radiocarbon dating. And we’ve got more sites with more radiocarbon dates, and we can say a lot more. And we’ll be discussing that later on. What’s particularly important about Milking Gap is its location.

1:32Skip to 1 minute and 32 seconds To the north we have Hadrian’s Wall, behind us we have the Vallum. And yet we have this settlement which follows, essentially, a long-established and traditional form of architecture and layout at, one might say, an indigenous-type settlement, with five separate roundhouse locations being identified within this enclosure. So the question then is, how might this have related to the larger story of the presence of Hadrian’s Wall, and the larger story of long-term settlement in this area? Well, one clue that struck the excavators back in 1937 was the presence of second-century pottery. Unfortunately, the very small quantities did not allow us to say whether that was second century as in before the construction of Hadrian’s Wall, or second century after 122.

2:26Skip to 2 minutes and 26 seconds But we do have here at Milking Gap an important case study, and one hopes that further research on this spot will take forward this evidence over and above what was known from the ‘37 excavations. I think beyond that, it’s worth noting that there is very exciting work going on in the question of native-Roman interaction through the study of settlements such as these further to the east, where we’ve now got more radiocarbon dates coming out, and those are allowing us to do a lot more with the questions of settlement change and disruption.

Hadrian’s Wall was situated within a very rural landscape, and the vast majority of people living in the frontier zone lived on rural settlements and were engaged in farming. But how did the rural landscape relate to the Wall?

Rural settlements during the Roman period were much the same as they were in the later Iron Age (see Step 1.7). In the areas near Hadrian’s Wall, settlements tended to consist of round buildings surrounded by an enclosing ditch. The buildings themselves could be constructed of stone, wood, turf, or a combination of these materials.

An excellent example of a rural settlement is Milking Gap, situated between the Wall curtain and Vallum, west of the fort of Housesteads (see the map from Step 1.1). This settlement was excavated in 1937, identifying a number of circular structures in the settlement and a number of artefacts that dated occupation to the 2nd century. 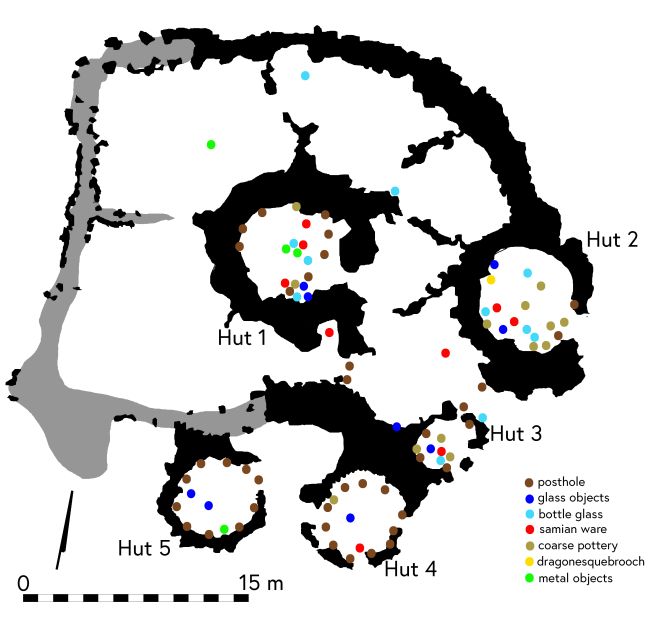 Some of the structures, labelled huts by the excavator, were used for living accommodation, but some may have been used for craft activity. Inside the outer walls of the farmstead are thinner walls that probably were used to create stockyards or pens for livestock.

Milking Gap is an exceptional rural site due to the relatively large numbers of Roman artefacts and pottery that were found there during excavations. At most rural farmsteads that have been excavated, there is usually only a small handful of artefacts found.

Relative to Roman military sites, only a small number of rural sites have been excavated, and this makes it difficult to understand the relationship between the soldiers along Hadrian’s Wall and the rest of the frontier peoples, living on farmsteads to its north and south.

One consistent feature of many farmsteads is that there is some limited evidence of activity in the 2nd century AD. Recent excavations on rural settlements north of Newcastle have further reinforced this trend, and Nick Hodgson has suggested that it is possible that many farmsteads were abandoned after Hadrian’s Wall was constructed.

Certainly it is true that there are only a few rural sites that have evidence for occupation in the 3rd or 4th centuries, as at Huckhoe. This leaves us with a number of questions:

Read the comments from other participants and add your reply.