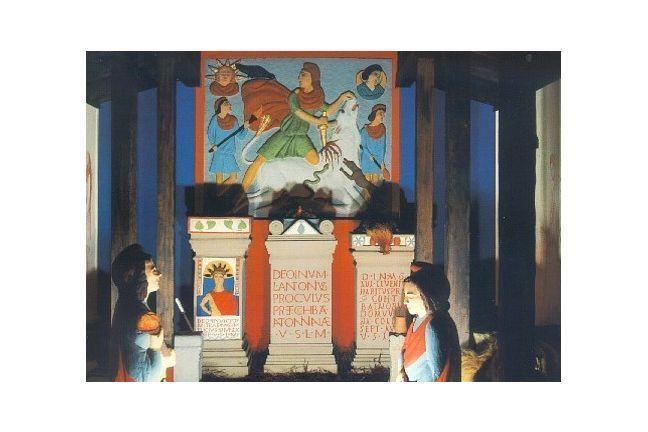 © Society of Antiquaries, Newcastle Upon Tyne

Reading the altars of Mithras

Let us look again at the altars grouped together at the end of the temple, beneath the Tauroctony (bull-slaying) scene (shown above). Before reading them, think about their general appearance and decoration.

We can see that they are painted. As with most altars of the Roman period, the paint has now disappeared, but when the Carrawburgh altars were discovered in the 1950s, traces of their original paint survived. We can see that in important ways two of the three altars share the basic anatomy of altars we have already studied. Their shape is similar to the altar we examined that was dedicated to the god Antenociticus. They have capitals, die, shafts, and bases, and one has a focus. But there are variations. One altar has been cut through, to provide a halo pattern around Mithras’ head.

Let’s turn to the text. We are going to ask you to read some information from two of the altars. To get you started, we have included notes on the other altar RIB 1545.

The transliteration, with expansion of the abbreviations in round brackets(), of the inscription is given below.

We can draw out a lot of lessons from this text, which are discussed further in the next video. But for your exercise note the following:

Having read the first altar together, we would now like you to use what you have learnt to transliterate the inscriptions on the other two other altars, and if possible to translate them, yourself. Remember to watch out for ligatured letters and abbreviations. Even if you find that you are not able to work out all of the text, you should be able to answer the questions below.

Once you have gone through the two texts and reflected on your answers to the questions, please continue to the next step, where Ian explains how he reads the altars and discusses what can be learnt from them.