This content is taken from the Newcastle University's online course, Hadrian's Wall: Life on the Roman Frontier. Join the course to learn more.
View course
6.7 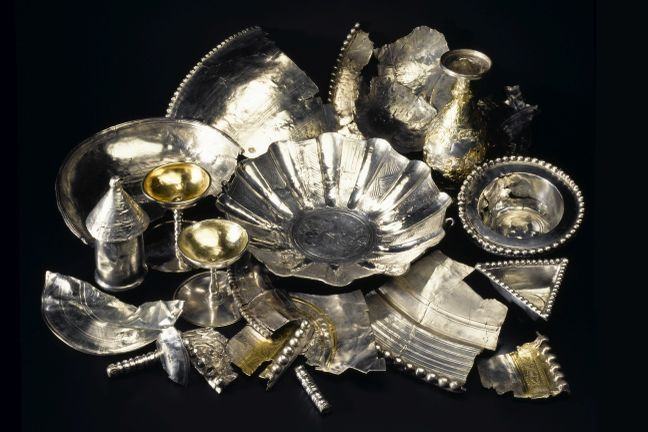 Part of the Traprain Law hoard, which is on display in the Early People gallery at National Museums of Scotland.

A dramatic discovery made at the hillfort of Traprain Law, some 35 km east of Edinburgh, in 1919 has forced us to reconsider life in the 4th century. 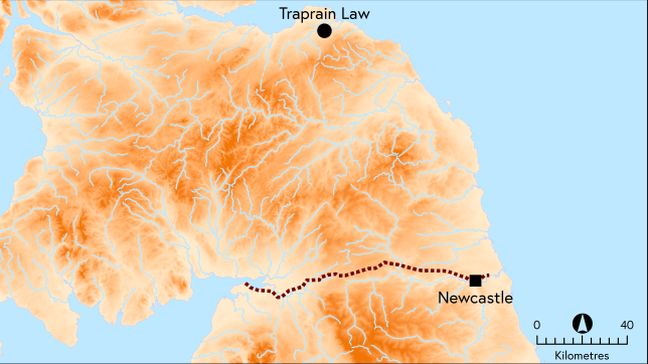 A ‘hoard’ consisting of about 250 items and weighing approximately 22 kg was discovered. The majority of the hoard’s contents are fragmentary silver vessels of Roman origin. However, there are a number of other silver objects, including four coins, and a number of items of belt equipment.

The vessels are excellent examples of high status Roman tableware that could be found in the finest households across the Roman Empire. There are bowls, plates, platters, jugs and chalices. One of the platters is amongst the largest known to be made during the Roman period. One of the jugs is exquisitely decorated, depicting scenes of classical myth and using gilding to highlight the workmanship.

In the Roman Empire, these silver vessels would form part of the dining ritual, often at feasts or banquets. To find so many of these vessels in a hoard outside the Roman Empire, at a barbarian hillfort is spectacular!

Equally important is the fact that these vessels and other silver objects are not only incomplete, but fragmentary. They have been cut and chopped into small pieces.

This used to be interpreted as part of the savagery of the barbarians – they could not appreciate the beauty of Roman art and instead vandalised these civilized artworks that were probably stolen through raiding.

However, that view is now considered to be outdated. The fragmenting of silver and gold objects was an increasingly common practice from the 4th Century up to the 9th and 10th Centuries. Rather, if you consider each fragment individually, it can be seen that the chopped silver, known in German as Hacksilber, were cut into known weights.

So for the Traprain Law hoard, it is not the beauty of the vessels and other silver objects that is important, but how they were recycled and used. They were valuable because they were silver. And the fact that these objects were broken up into a fairly regular weight-system indicates that not only was the silver collected, it was being reused and handed out for the creation of other goods.

Arguably, one could say the Traprain Law hoard is evidence of a working treasury at the hillfort.

There are also the questions of how and when these silver objects arrived at the hillfort. Many, perhaps most of the objects date to the 4th Century, and these objects may have been booty from raiding parties, or perhaps received as diplomatic gifts from the Roman Empire.

But there are also a small handful of imported objects that date to the 5th Century. These objects are important, as they provide a date for the deposit of the hoard in the 5th Century (or later). They also show that Traprain Law was still an important site in the decades following the end of Roman Britain around AD 410 – a site important enough to attract foreign goods and/or visitors.