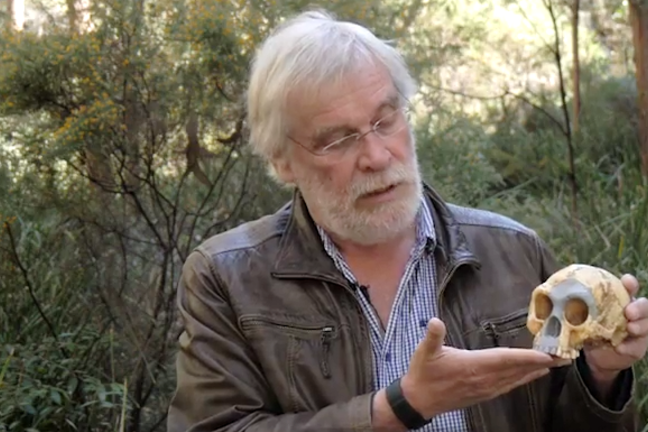 Professor Rainer Grün with a cast of the 'Hobbit' skull.

Homo floresiensis has only been found on the island of Flores. What hominin fossils have been discovered there?

The original excavations at Liang Bua in 2003 uncovered the partial skeleton of an adult female (LB1), which was missing the arms but included the cranium and mandible, along with leg bones, part of the pelvis, parts of the spine, ribs and shoulders (Brown et al., 2004; Morwood et al., 2005).

In 2004, excavations continued on Sector 7 and the adjoining sector, Sector 11. The arm bones belonging to LB1 were recovered, along with other bone pieces also belonging to LB1. They also uncovered another adult mandible and skull fragments from other individuals – identifying a total of at least nine individuals (Morwood et al., 2005).

They dug to a depth of 11 metres, mapping the stratigraphy across the two sectors, and designating the layers from A (at the top) through to X (at 11 metres) – where they had not yet encountered bedrock (Morwood et al., 2005).

Pigmy elephants and other things

They did not just find H. floresiensis remains. The top layers contained fossil remains of Homo sapiens. Animal remains were also uncovered, including Stegodon, Komodo dragon, rat and bat remains. They also located charred bones and fire-blackened rocks arranged in a circular pattern – suggesting the use of fire. Some of the Stegodon bones had cut marks on them (Morwood et al., 2005).

With its short legs, longer arms and small size, H. floresiensis had some resemblance to the Australopithecines of Africa. The skull had features that were similar to Homo erectus, while yet other features were its own – such as its large feet (Aiello, 2010).

Excavations of the site since have produced tens of thousands of animal bones, including Stegodon, pigs, monkeys, snakes, lizards and birds, to name a few (van den Bergh et al., 2009; Morwood et al., 2009).

Homo floresiensis created an enormous stir in archaeological circles. There were a few reasons for this:

Theories abounded, suggesting a pathological condition such as a disease or some hereditary abnormality that was causing H. floresiensis to be so tiny (Morwood et al., 2009).

Homo floresiensis did not fit neatly into the existing perspectives of human evolution.

The tiny Hobbit had arrived with a huge splash.

Watch this short video from Griffith University’s Know More in Sixty Seconds collection. It features Adam Brumm, an Associate Professor at ARCHE who specialises in the dispersal and evolution of early humans in this region. He sums up the challenges of the Hobbit in… well, sixty seconds.

Hopefully, you can see why we spent so much time in week one explaining the principles and methods of dating, as well as introducing you to the major hominin species. It equipped you to quickly grasp the significance of finds such as the Hobbit.

Members of the team that discovered this species were tempted to name it Homo hobbitus, after the Lord of the Rings fantasy trilogy by Tolkien (Reader, 2011).