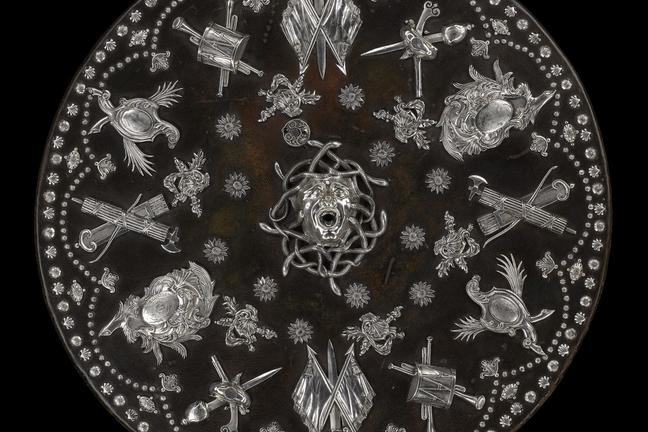 Dress targe made of wooden boards covered with pigskin, with silver mounts, c. 1740, part of the accoutrements presented to Prince Charles Edward Stuart by James, 3rd Duke of Perth/H.LN 49

We are moving chronologically forwards quite rapidly now, as Prince Charles Edward Stuart comes of age.

In the late 1730s and into the early 1740s the Jacobite court in exile became a brilliant social centre. There was optimism in The Palazzo del Re that Prince Charles Edward Stuart would finally recover the thrones of his father and grandfather.

His father James VIII and III knew that a restoration attempt would need French military assistance.

The prince was 21 years old in December 1741 and war between France and Hanoverian Britain was renewed in 1743.

At the end of that year, James named Charles Prince Regent, and gave him authority to act in his name. Charles left Rome and went to France to obtain the support of Louis XV.

In our next step, we look at two treasured objects from National Museums Scotland: a silver backsword (or broadsword) and a targe (a round Highland shield) thought to have been 21st birthday gifts to Prince Charles Edward Stuart from James Drummond, the 3rd Duke of Perth.

David Forsyth, Principal Curator Medieval-Early Modern Collections at National Museums Scotland will talk in more detail about these objects, but let’s just pause for a moment here to put them in context.

They were sent to Rome as accoutrements for a complete set of Highland dress, that included a tartan outfit, with one for Prince Charles Edward Stuart and another for his brother, Henry Benedict.

Charles wore the new suit of clothes to a carnival in Rome at Easter 1741 and a description is given by a British government spy the Baron de Strosch, alias John Walton:

‘[The prince] dazzled in the costume of a Scottish Highland officer, with a suit checked in diverse colours and adorned with embroidery and different coloured jewels of a value of more than forty thousand scudi, according to connoisseurs. The suit came from France. However the bonnet, shield, and arms came as a present from Scotland last year. Connoisseurs have observed that the jewels were not bought in Rome, having certainly been made and assembled by a jeweller in London or Paris, and far surpassing in beauty anything similar that the Italians could make’

Don’t you wish you could have seen the prince, bejewelled in his fine tartan clothes with all the accompanying accessories?

Go to the next step to watch David Forsyth discuss the sword and targe.