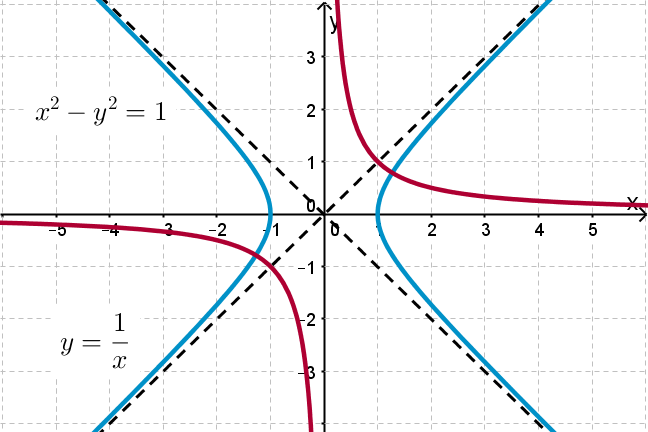 What do these 2 hyperbolas have in common?

The seemingly simple hyperbola has many interesting aspects. It is our basic model for an inverse relation, and it embodies the fundamental arithmetical operation of taking the reciprocal of a number. It has a sister hyperbola with equation that features prominently in Einstein’s special theory of relativity.

Here is the graph of the deceptively simple relation , or equivalently , which connects a number to its reciprocal . A typical point on the curve is , such as , and .

Note that the equation expresses the two asymptotes and .

Here is another hyperbola: with equation . This does not define a function in the usual sense, because it cannot be expressed as a function . Instead this is an example of a more general relation between and .

Note that the equation expresses the two asymptotes and because .

Q1 (C): Can you see any similarities between the hyperbolas and ? Is there any way to get one from another?

Suppose that and are two points on the hyperbola. To find the equation of the secant line we can first find the slope

and then write the equation as

for some unknown number .

When we substitute the point into this equation, we get

It follows that the equation of the secant line is

This can be rewritten also in the form

Q2 (E): What are the and -intercepts of the secant line?

Tangents to the hyperbola

A tangent line intersects a curve at only one point. So, to find the tangent line to the hyperbola at the point we can just set in the equation of the secant line. This gives

Hidden in this seemingly innocent derivation is a key formula of calculus: that the slope of the tangent at the point is , which is the derivative of at the point .

Q3 (E): What are the and -intercepts of the tangent line?

Q4 (M): Show that the product of the and -intercepts of the tangent line is constant, independent of the point .

Q5 (M): Show that if is the point and then , where is the point on the hyperbola. This verifies another of Apollonius’ claims.

A1. Please let us know in the comments what you think.

A4. From the previous example we have that the intercepts are and , and so their product is , which is constant.

A5. The quadrance between the points and is

The quadrance between the points and is