0:05Skip to 0 minutes and 5 seconds SIMON KEAY: I’m currently standing in a massive passageway which is known as the Portico di Claudio. This portico, in antiquity, looked out onto the great Claudian basin. What you have to do is think away the brick wall that you see between the columns and imagine in your mind’s eye a massive stretch of water. This water was the Great Basin of Claudius. And one has to remember that this encompassed a huge area. Something in the region of 200 hectares of water. And at the very, very end of it, you would have seen the rising prominence of the great Pharos, the great lighthouse of Portus built by the Emperor Claudius.

0:55Skip to 0 minutes and 55 seconds And this lighthouse guided ships from across the Mediterranean approaching the port of Rome into the port complex itself. And so one would imagine ships coming, mooring here, and starting to unload their cargoes.

The Claudian basin was a massive artificial harbour that encompassed c. 200 hectares and was the core of the early port. It was probably completed by AD 46, the same period that major building projects were underway at Ostia such as the Grandi Horrea, which was likely a large public storehouse. An inscription from AD 46 found at Portus in 1836 commemorates the Emperor Claudius as having delivered the City (of Rome) from the dangers of flooding through the construction of canals (fossis). These stretched from the Tiber to the sea. The inscription also commemorates the construction of the harbour. Here is the full text:

Dragana provided a translation as follows during the first running of the course:

The inauguration of the port as a whole did not take place until AD 64 during the reign of the Emperor Nero. He issued a beautiful brass coin (sestertius) in commemoration, which depicted an idealized representation of the harbour.

The basin was enclosed by two huge concrete quays that projected far out into the Tyrrhenian Sea. The great Pharos, or lighthouse, was established at the end of the quays. This was probably a conscious evocation of the great harbour of Alexandria in Egypt. 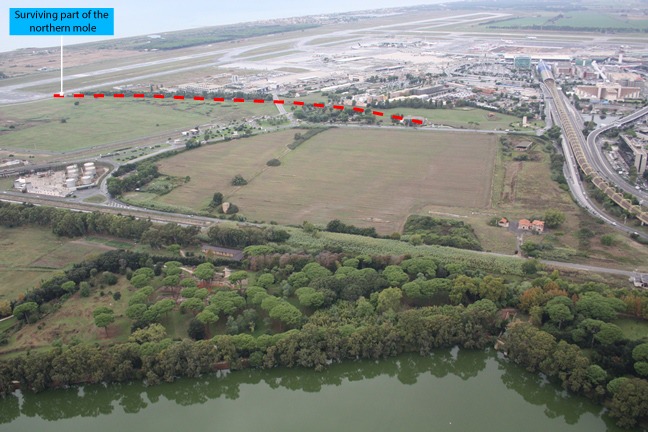 View to the north of Portus, showing the surviving northern mole - Simon Keay © University of Southampton

The Roman writers Pliny the Elder and Suetonius tell us how the ship that had transported from Egypt to Rome the great obelisk that now stands in front of St. Peter’s in Rome, was filled with concrete and sunk in order to provide the solid foundation upon which to build the lighthouse. Running along the landward side of the basin was another major quay along which were established a number of very substantial warehouses. On the eastern side of the basin was a smaller 1.07 hectare basin, known to archaeologists as the Darsena, mentioned briefly in the previous step. The artificial canal - the Fossa Traiana - mentioned in the last step is on the southern side of the port. It is known today as the Canale di Fiumicino. It was directly accessible from the main basin complex and connected it both to the Tyrrhenian Sea and to the Tiber to the east. Another, temporary, canal ran between the Tiber to the north and the Tyrrhenian Sea to the north of the port. We believe that these are the canals that are referred to on the 1836 inscription.

The Portico di Claudio is a monumental colonnade which defined the western seafront of the main land area of the Claudian port. It is on the eastern side of the Claudian basin and probably originally extended north as far as the Canale di Imbocco del Porto di Traiano - the entrance canal. It would have provided a monumental façade for ships approaching the basin from the west, with the quay on which it was built requiring ships to make a dog-leg into the entrance canal and presumably offering more protection as a result. It was originally excavated in 1933. Similar porticos were built in Ostia, such as the Magazzini Repubblicani that was added to c. 50 AD, that would have comprised of shops and storerooms

Each column is composed of drums of travertine (a type of limestone), with a base diameter of c. 1.05 – 1.26 m and a total height of c. 6 m. The capitals and bases of each column are finished but the drums comprising the shafts have an intentional rusticated (rough) finish. This style is reminiscent of major public building works undertaken by the Emperor Claudius in Rome. This helps to date the Portico to the original scheme of the Claudian harbour at Portus.

The Portico di Claudio forms a T-junction with a contemporaneous colonnaded street running east-west. This is c. 8 m wide and can be traced eastward almost as far as the Canale di Communicazione Trasverso, that connected the Darsena and the Canale di Fiumicino. Its role was to provide access to one complex of warehouses that were arranged around the Darsena to the north and known as the Grandi Magazzini di Traiano, and another complex of warehouses to the south that is referred to as the Foro Olitorio. The dates of these warehouses are uncertain. Whilst they are thought to have been established under Claudius, their most visible development took place in the course of the 2nd and earlier 3rd centuries AD.

We cannot always be certain what parts of the port were completed under Claudius and which under his successor Nero. We do know however that the inscription found in 1836 talks of fossis (canals), so there were at least two. It is very likely that the second one is the Northern Canal as discussed. Then there is the reference to harbour works which must refer to the first phase of the Portico di Claudio and the first phase of warehouses opening onto the Darsena basin.

There is more but it starts to get complicated. Anyway, you should think of Claudius as having had a very major impact on the site. It was his idea, and constructed according to his grand vision, and thoroughly deserves his name today. 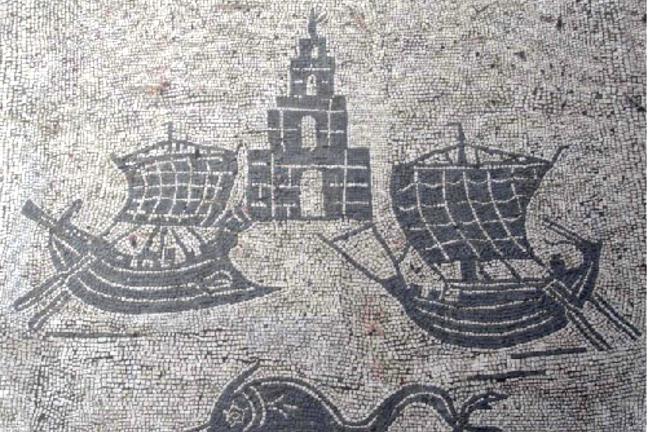 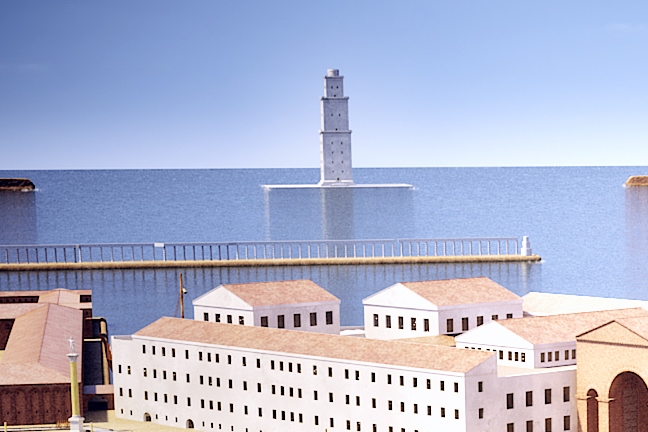 CGI view of the Pharos, the northern and southern moles, and the antemurale as they might have been in the time of Claudius; the foreground building relates to a later phase - Grant Cox © University of Southampton