0:05Skip to 0 minutes and 5 seconds GRAEME EARL: Welcome to week two. I’ll keep this brief. This week we’re going to look at the time of Trajan and we’ll reduce our scale of analysis. Last week it was all about the Roman Mediterranean and the wider empire. This week it’s about the local port system of Portus, Ostia, and Rome. And also about connections further up the Tiber River. You’ll learn about trade and about the massive buildings from this period. And study some objects that magically let us date the archaeology to a single year. So on we go. Simon will kick off the week talking about the second century Roman world, and then we’ll look at Portus specifically. As ever, please post your comments and queries.

0:49Skip to 0 minutes and 49 seconds We love reading them and we love getting back to you.

As you know the Roman Empire was its height during the reign of the emperor Trajan. He had just conquered Dacia and with the gold from the Dacian mines pouring into the Imperial treasury, Trajan embarked upon a massive building programme at Rome, comprising his famous Forum, the baths and other buildings.

Trajan also invested much in the infrastructure of the City, notably the Aqua Traiana and the banks of the Tiber. However, he also invested a massive amount of this new resource in improving the commercial infrastructure of the Capital by firstly building a new maritime port at Centumcellae (Civitavecchia) to the north of Rome and, of course, substantially enlarging Portus. These changes taken in conjunction with other changes at the river port of Rome and the establishment of new warehouses at Ostia created, in effect, what we can call the “port system” of Imperial Rome. 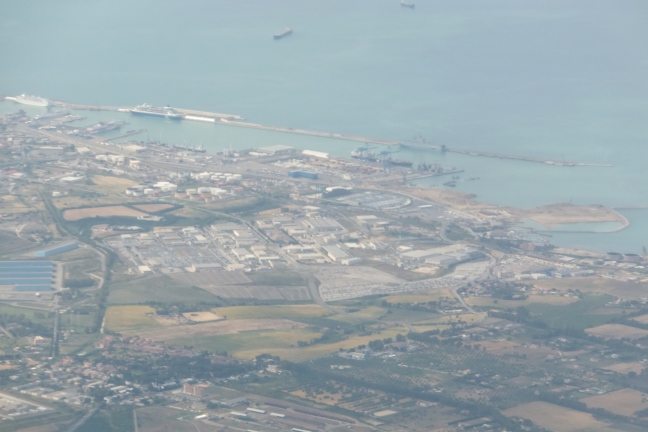 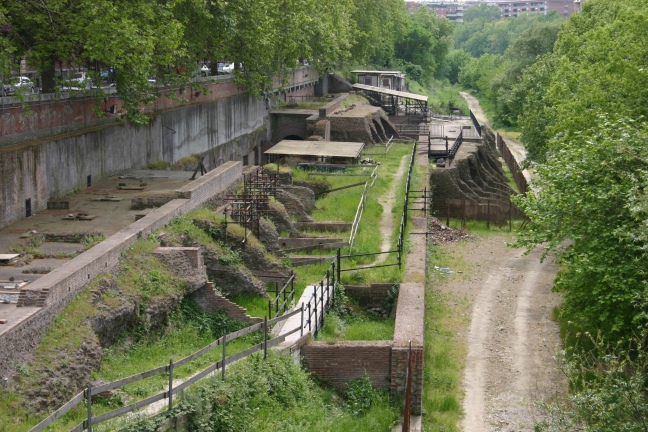 The river port at Rome - Simon Keay © University of Southampton

The most important part of his enlargement at Portus consisted of the creation of a new harbour basin set inland from the earlier Claudian basin that was surrounded with a number of massive new warehouses. This enabled a safer internal anchorage. He built a major new canal between Portus and Ostia and a new canal (the Canale Romano) running between the Canale di Fiumicini and the Tiber which provided for a more accelerated process of transhipment. This canal is probably the one described in a badly damaged inscription found at the site which dates from the Trajanic phase. In Latin it reads:

You might want to have a go translating that! There are plenty of Latin dictionaries online so see what you make of it. Dragana’s answer is at the end of this step. Note how badly damaged it is – the vast majority has to be reconstructed on the basis of standard forms of language in this kind of context.

All of this new infrastructure enabled Portus to handle an increased number of ships and to move cargoes through the port more efficiently, thereby improving its ability to keep the City of Rome supplied with foodstuffs and materiel.

Having watched the video you should have a sense of the content of the coming week. It is all about the Trajanic Period, and reducing our scale of analysis from the Empire as a whole to the “port system” of Portus, Rome and Ostia. We will think more about what this really means a bit later.

By the way, the backdrop to this video is the Cryptoporticus - a covered passageway on top of which was established the monumental colonnaded façade of the Palazzo Imperiale, called the Terrazza di Traiano, and built under Trajan. You can see animations of the laser scans we produced of this area at the end of this step.

This week you’ll also learn a bit more about the kinds of trade that took place, dating via objects and some of the largest buildings on site.

Graeme mentioned connections up the Tiber river. By this he meant the supply chain that operated from north of Rome, including towns like Ocriculum that provided building materials for Portus. Work-in-progress CGI view of the Terraza di Traiano from the west - Grant Cox © University of Southampton (Note: You can see an approximate equivalent view of this area today via Google Maps 3D - these do not work on all mobile devices) James Miles has produced lots of laser scans of Portus. You will learn more about this technique in a later week. But for now we thought you might like to take a look at scans of the Terraza di Traiano - the exterior showing the Terraza in detail and the interior - the cryptoporticus. Do you think these help you to understand this part of the site? What do you notice of interest in the scans? 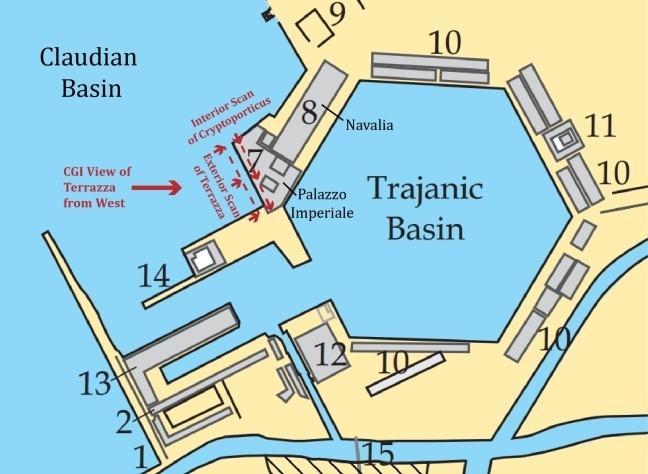