0:05Skip to 0 minutes and 5 secondsSIMON KEAY: We see a very major expansion of the port under the emperor Trajan. Now the dating of this great enlargement was probably somewhere between AD 112 and AD 117. And the enlargement consisted of the creation of a new basin, an additional harbour basin, which lies directly in front of me. And in other words, which is to the east of the earlier Claudian basin. And this basin, we know very well because it still survives, by historical accident. And it's, today, filled with water. And we know that in antiquity, it was probably about five metres deep.

0:50Skip to 0 minutes and 50 secondsIt would have been surrounded on all six of its sides by a number of major public buildings but primarily warehouses for the storage of goods from across the Mediterranean, by an important series of administrative buildings, and by a temple complex. In addition to that, the emperor and his architects took the trouble to add an additional canal, which connected one of the earlier Claudian canals to the Tiber as a way of facilitating the process of transshipment, speeding up the process of unloading cargoes from big sea-going ships onto smaller river-going ships and taking them up the river to Rome.

1:36Skip to 1 minute and 36 secondsSo this major complex at this stage, in addition to the two basins, the warehouses, and the canals, and so on, would have covered something in the region of 3 and 1/2 square kilometres. This is a massive complex that was also linked to the river port of Ostia, which of course continued to function. And of course, was directly connected to Imperial Rome itself by a road, the Via Campana, Portuensis. And, of course, by the river Tiber itself.

2:12Skip to 2 minutes and 12 secondsAll three elements Portus, Ostia, and Rome, and in addition to that, the port of Civitavecchia further up the coast from here, comprising what one could perhaps call a port system, a complex for the supply of the great city of Rome with its one million people that is without parallel in antiquity.

The hexagon - Trajanic expansion of Portus

We’ve now seen that the major expansion of Portus took place under the Emperor Trajan between AD 112 and AD 117, contributing to make the overall complex cover some 3.5 km2. The centre-piece of his enlargement consisted of the excavation of a new hexagonal harbour basin inland behind the Claudian basin. 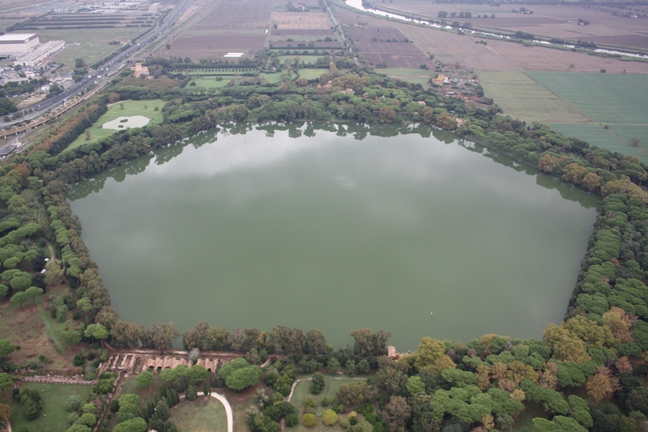 The Basin of Trajan, with the Grandi Magazzini di Settimio Severo (the Great Warehouse of Septimius Severus) at the base of the picture - Simon Keay © University of Southampton

Each side of the hexagon is c. 358m in length, resulting in a basin covering c. 33.25 hectares, and c. 5m deep. Some of the original travertine mooring stones remained in situ along the quays of the hexagonal basin until the 20th century when the sides and base of the basin, now a lake, were lined with concrete. Making this was a substantial undertaking which, as Dragana discussed in an extra video recorded on the 2014 Portus Field School, was almost certainly not done using slave labour. 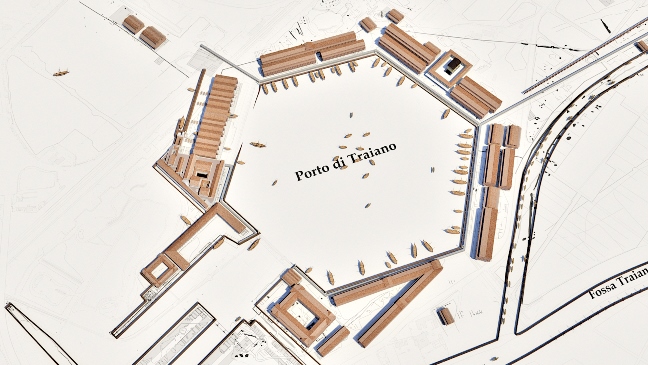 CGI overview of the Hexagon; gradually over the last 10 years we have developed a series of 3D models of the site that we use to help understand its form and function - Grant Cox © University of Southampton

A substantial brick wall ran around the inside of several sides of the hexagonal basin (not necessarily all), set back from the quayside by c. 6m. This wall was periodically pierced by narrow entrances, presumably intended to control the flow of cargoes from the ships to the warehouses where they were to be stored. Some stretches of this wall are still visible in the undergrowth on the western side of the hexagonal basin. Unfortunately, little is known about the date of the wall. Columns marked with Latin numerals were placed periodically along the quayside, marking berthing points for incoming ships.

Around the basin and elsewhere on the site we find massive stone blocks with 50cm diameter holes, used for attaching mooring ropes. You can see these below, incorporated into a CGI view of the canal that provided access to the Trajanic Basin (Canale di Imbocco al Porto di Traiano). CGI view of a building interpreted from the geophysics on the north side of the Canale di Imbocco al Porto di Traiano, with mooring blocks visible - Gareth Beale © University of Southampton 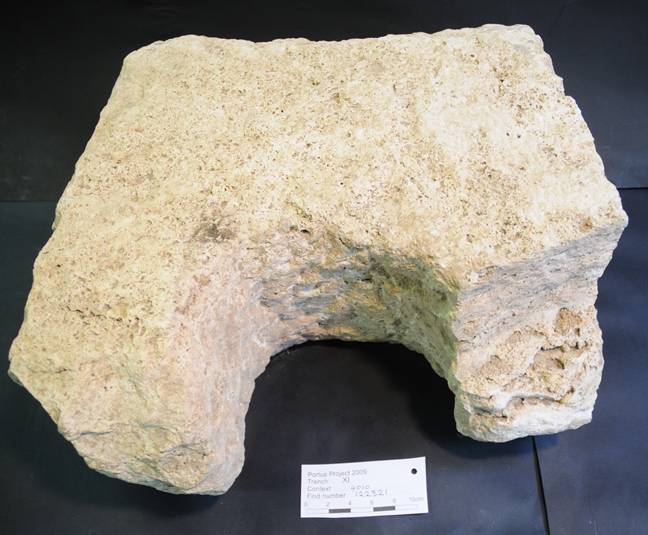 Opening onto the basin on four of the six sides were massive new warehouses in which were stored goods unloaded from ships anchored in the basin itself. Furthermore, on the side opposite the entrance of the basin a large warehouse was built on either side of a temple complex within a temenos (temple precinct), in front of which stood a massive statue of Trajan himself. An inscription from the temple area was recorded in the 19th century as a dedication to Liber Pater Commodiana. This inscription, together with the position of the temple and the statue as the focal point for the Trajanic Basin, suggest that this was a temple to the cult of the Emperor, together with a number of attributed deities such as the old Italic god Liber Pater and, one would imagine, others.

Those warehouses on the south-western side of the basin were used for the transhipment of cargoes from sea-going ships into warehouses that then fed river craft that carried goods up a new canal to the Tiber, and from thence to Rome. Ostia was additionally influenced by the new constructions at Portus, as seen by the creation of new warehouses throughout the city at the same time, such as the Horrea III.II.6. Excavation and geophysical survey have revealed the presence of other buildings at Portus, including the so-called Imperial Palace (Palazzo Imperiale), and a large building used for the repair or construction of ships.

Another important element in this expansion was the construction of a major new road that left the eastern side of the hexagonal basin and followed the canal to a point close to where it met the Tiber, before changing direction to head towards the Via Campana – thereby enhancing communication for wheeled traffic from the port to Rome.

Look at the plan of Period 2 to see the layout of buildings around the new basin. Civitavecchia was linked to Rome by the Via Aurelia and to Portus by the sea.

Simon also said that the basin was 5m deep. How do you think we know this? What kinds of evidence do you think would be relevant here?

In the next two steps we will learn about one high-tech source of evidence about the hexagon, and then think a bit more about the port system of which the hexagon was a part. Work-in-progress CGI view of a possible shipshed on the north-western side of the Hexagon, viewed from the south-east - Grant Cox © University of Southampton; (Note: You can see an approximate equivalent view of this area today via Google Maps 3D. You can make out the building in the distance on the eastern shore of the Claudian basin, that is indicated in Grant’s CGI model. These links do not work on all mobile devices).