It would take far more time than we have on this course to analyse fully a system failure as complex as the de Menezes example.

To do this it would be necessary to examine the workings of a number of subsystems in some detail. Just to take one example, at the heart of the decision making subsystem lies a structure called Gold-Silver-Bronze (GSB).

In the UK, this structure is used by the emergency services as a framework for the command and control of major incidents and disasters. The structure is also adopted by most voluntary agencies and local authorities involved in emergencies. It is applied to the resolution of both spontaneous incidents and planned operations and provides a framework for delivering a strategic, tactical and operational response to incidents or operations.

After a serious riot in North London on 6 October 1985, where Police Constable Keith Blakelock was murdered, it became apparent that the usual rank structure was inappropriate under such circumstances [2]. In response, the Metropolitan Police created the GSB structure as a more flexible command and control structure.

The Gold Commander is in overall control of their organisation’s resources at the incident.

They are not on site, but located at a distant control room, the Gold Command, where they formulate the strategy for dealing with the incident. If the Gold Commanders for the organisations involved are not co-located, they will be in constant communication with each other.

Gold Commanders meet periodically to discuss and formulate policies and working practices between their organisations, and to pre-plan coordination.

The Silver Commander is the senior member of the organisation at the scene of an incident, in charge of all the available resources. They decide how to use these resources to achieve the strategic aims of the Gold Commander, and they decide the tactics to be used.

At the scene of an incident, they will work closely with the Silver Commanders of other organisations. They usually operate from purpose-built command vehicles or makeshift command room(s), known as the Joint Emergency Services Control Centre (JESCC). They are not directly involved in dealing with the incident itself.

During the initial stages of an incident, the first member of the organisation who arrives at the incident temporarily assumes the role of Silver or Bronze Commander until relieved by a more senior member of their organisation.

The Gold-Silver-Bronze command structure is summarised in the following diagram. 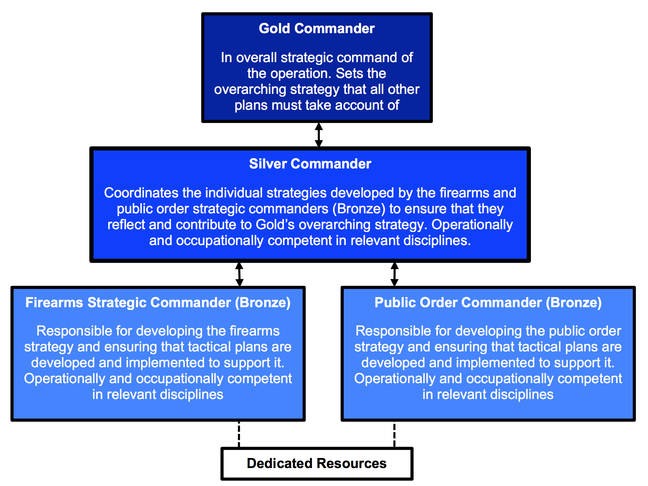 The steps that follow will consider the GSB command structure in the context of the Formal Systems Model.