We take a closer look at the video game industry, exploring the current state of play, the types of jobs available, and the skills you’ll need to get started in it. 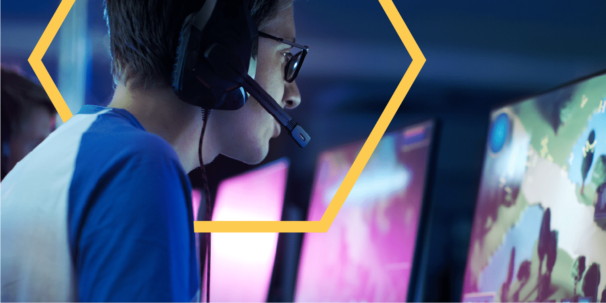 Video games have been around since the early 1970s. Despite being a relatively niche market for many years, the video game industry is now a global powerhouse, growing from strength to strength. We take a detailed look at how the industry is faring, and some of the unique roles within it.

As well as exploring the scale and progress of the games industry, we’ll also explore some of the skills you’ll need to get started, and why people choose a career in this field.

Let’s begin by looking at how things stand currently in the global games industry. As you can imagine, given the progress we’ve seen in technology over the last few decades, the business of video games has changed significantly in that time.

It’s worthwhile outlining the definition of what the game industry covers. From humble beginnings, video games now cover personal computers, consoles, arcade games, mobiles, virtual reality, handhelds, and more. The industry covers those who design and program games, and those who develop, test and publish them.

As we’ll see, there are many different roles in the game industry, across a host of disciplines. There are some huge companies in the industry, and video games and consoles are sold around the world. However, with technology such as digital distribution networks and crowdfunding, it’s easier than ever before for indie developers to get their name and their games out there.

How big is the industry?

Video games are big business. Reports suggest that the global market size was valued at around $151 billion in 2019. It is forecast to have an annual growth rate of around 12.9% over the coming years, and, by 2026, it’s expected to reach a value of nearly 296 billion.

These staggering numbers mean that video game industry revenue is larger than the music and movie industry combined. Much of this growth is down to advances in hardware and software, as well as wider availability of internet access.

In terms of revenue, data from 2019 shows that mobile gaming takes the largest share of the spoils. They accounted for around $64.4 billion of revenue, compared to the second most, free-to-play PC games, which accounted for 21.1 billion.

How has the COVID-19 pandemic impacted the game industry?

COVID-19 has affected just about every industry in some form or another. When it comes to video games, the impacts have been mixed.

On the one hand, lockdowns have meant that people are playing more video games than before. With theatres and cinemas closed, gaming seems to be one of the main forms of entertainment people are turning to. In the first lockdown, for example, game sales increased by 44%.

Specific companies saw particularly impressive gains. Demand for the Nintendo Switch during the first phase of the coronavirus pandemic saw Nintendo’s profits rise by over 400%. Much of this was driven by sales of the Animal Crossing video game, which launched on March 20th 2020.

However, the impact of COVID-19 on the games industry and those who work in it hasn’t all been positive. There have been delays across the industry in terms of games releases and hardware supplies.

The sudden shift towards remote working meant that games companies and developers were trying to work on collaborative projects with their teams working from home. This saw employees on high-profile games like Cyberpunk 2077 working in ‘crunch’ conditions for months to get the game finished. Even then, a disastrous launch in November 2020 saw disgruntled fans and a raft of refunds.

Similarly, consoles such as the new PS5 and in-demand Nintendo Switch have been hard to find, thanks to struggles for components in supply lines.

What kinds of jobs are there in the industry?

As you can probably tell from the various topics covered so far, there are many different job roles in the game industry. Even within the various niches, you’ll find a range of games industry jobs.

With this level of choice and different game career paths, it can be hard to know which one might be right for you. To help give an overview of some of the jobs available, we’ve picked out some examples from a range of specialisation:

These types of games industry jobs focus on things like the visual elements of games. For those with some creative flair and a love for video games, this could be the area for you. Examples include:

Video game design jobs are also fairly varied. Some focus on the overall concepts of games, while others are more technical or hands-on. If you’re interested in design, you might want to think about a career as a:

Jobs in video game development often focus on bringing together ideas and work from other areas into a playable game. Examples include:

How do salaries compare?

If a career in the game industry sounds appealing, you’ll likely want to know what sort of pay scale you can expect. Of course, given how different the many roles are, there is a lot of variety in the salaries they offer. It often depends on the company, position, and location you’re hoping to work in.

To give some context to game industry salaries, we’ve picked out a range of jobs and their average annual pay across several countries. Data comes from PayScale.


What skills do I need to enter the industry?

Getting a job in the game industry can sometimes seem like a daunting task. As you might expect, games jobs are highly sought-after and competitive. To stand out to potential employers, you’ll need to develop and be able to demonstrate a wide variety of hard and soft skills.

Of course, the exact skills you’ll need to get a job in the games industry will depend on the types of roles you’re applying for. Generally, you’ll need a specific set of hard skills related to the particular field. You’ll also need to show a variety of interpersonal and transferable skills.

To give you an idea of the skills you’ll need to work in the video game sector, we’ve highlighted some of the most common hard and soft abilities to focus on:

This is the job-specific knowledge you’ll need to carry out your role. The exact hard skills will vary considerably; however, it’s always useful to have:

These are the interpersonal and transferable skills that make you a good employee, regardless of the specifics of your job. They’re often just as important as role-specific knowledge.

Why choose a career in video games?

There are many reasons you might want to choose a career in the game industry. If you have a passion for gaming and creativity, there are plenty of opportunities available, particularly if you have the right skills. Here are some of the reasons why a job in the video game sector might be worth considering:

How to get into the games industry

If you’ve read this far, you’re probably eager to get started with your career in the game industry. But how to get a job in the video game industry? Well, that really depends on the type of role you’re going for, and what your current level of skills and experience are.

As with many such industries, working in games requires a mix of education, experience, and know-how. Here are some areas you might want to start with:

If you’re looking to find out more about working in the industry, our free How To Start Your Career In Games Development course is the ideal place to start.

That concludes our exploration of the video game industry and all it has to offer. Clearly, it’s a vast and varied sector with a wide range of job opportunities. If games are your passion, you could find that working in the games industry is an interesting and rewarding opportunity. With the right knowledge, skills, and experience, you can start building towards your dream role.