This article looks at the sinking of the Lusitania and the impact it had.
© University of Hull

The war at sea affected civilians in important and notorious ways. The Royal Navy imposed a blockade on Germany which aimed to cut off not just military supplies but also the needs of the civilian population. The privations which followed are estimated to have caused the deaths of 700,000 German civilians. It was hard for the German High Seas Fleet to counter this threat.

In February 1915, it declared that the seas around Britain and Ireland were a war zone and that all shipping within it (both military and civilian) was at risk of being sunk without warning. The policy was so controversial that it was suspended in August 1915, only to resume from February 1917. 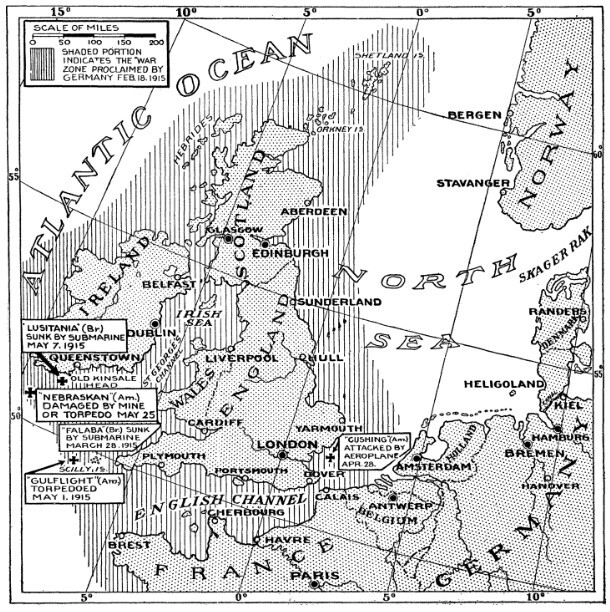 During the first phase of unrestricted U-boat warfare, the Cunard liner, RMS Lusitania was torpedoed and sank off the coast of Ireland on 7 May 1915. It caused the deaths of 1198 civilians. The coroner in Queenstown recorded the verdict of ‘wilful murder’. Although evidence soon emerged that it was carrying war supplies amongst its cargo, the sinking caused outrage on both sides of the Atlantic (the ship plied its trade between Liverpool and New York, and 128 Americans were among the dead).

The news of the sinking arrived at a moment in the war when emotions were particularly high. It was only a matter of weeks since the German army had used poison gas for the first time at the front. In Liverpool, where many of the Lusitania’s crew had lived, rioting kicked off on 8 May and continued for several days, but the phenomenon rapidly spread to towns across England and overseas to cities as far distant as Johannesburg. The publication of the Bryce report on 12 May, the official investigation into the German atrocities during the invasion of Belgium, further served to remind everyone of their seemingly inherent barbarism. A fresh effort to intern enemy aliens was announced by the Prime Minister on 13 May.

What happened was that targets that were perceived to be German were attacked and looted. It somehow didn’t matter if the ‘German’ owner of the property or business was a long-standing member of the community, a naturalised British citizen or even someone appearing to be German. The collective desire for revenge looked for whatever seemed to be a symbol of the enemy nation. Sometimes, these attacks were just randomly xenophobic, targeting anyone with an unfamiliar surname. For the recipients of this violence it was a terrible and often bewildering experience – confident in their place in the community, some of them even ignored warnings to flee, in the certain knowledge that their neighbours would surely not attack.