What is the relative contribution of natural and made-made radiative forcing over the past few centuries?
© University of Bergen - Author: Prof. Kerim Hestnes Nisancioglu & Odd Helge Otterå

What is the relative contribution of natural and made-made radiative forcing over the past few centuries?

Using the Bergen climate model, including volcanic eruptions and variations in solar irradiance, researchers at the Bjerknes Centre have simulated climate during the ’Little Ice Age’ (1400–1850AD). Natural factors largely explain the variations in both the reconstructed and the simulated temperatures in the Northern Hemisphere during this period (see figure). The coldest periods during the “Little Ice Age” normally occur in periods with particularly violent eruptions, such as Kuwae in 1453 and Tambora in 1815, as well as in periods having a sequence of eruptions, such as during the 1600s.

Climate over the past century

Climate models can simulate the isolated as well as combined impact of natural and man-made radiative forcing. The attached figure shows that it is only when including both natural and man-made radiative forcing that the model is capable of simulating the long-term positive temperature trend that has been observed over the past hundred years (the red curve in the lower portion of the figure). According to the model, there should have been a decline in temperature in the Northern Hemisphere during recent decades if it had not been for emissions of greenhouse gases caused by human activity. This indicates that the observed warming primarily is a result of emissions caused by human activity.

On shorter timescales, such as a periods of a decade, natural variations may outweigh human-caused climate change and result in periods with colder seasons, but in the longer term, human-caused warming will be the prevailing driver of present and future climate change. 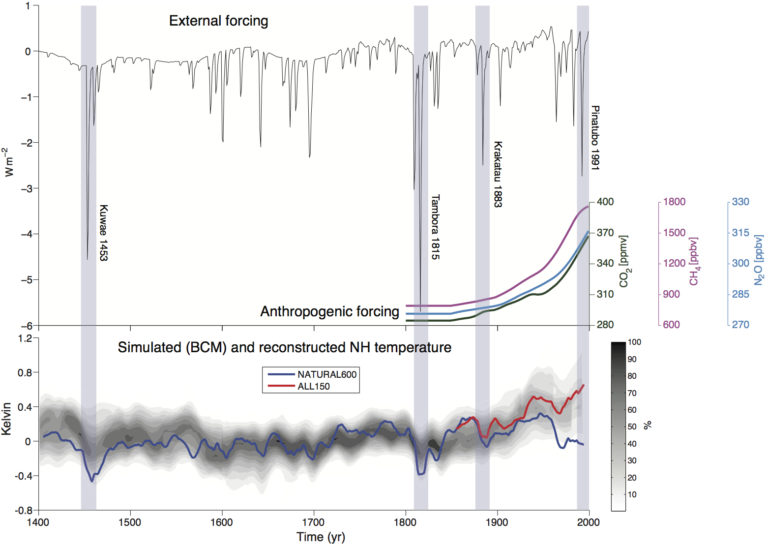