The concept of climate feedbacks is key to understand how sensitive the earth is to changes in a radiative forcing. 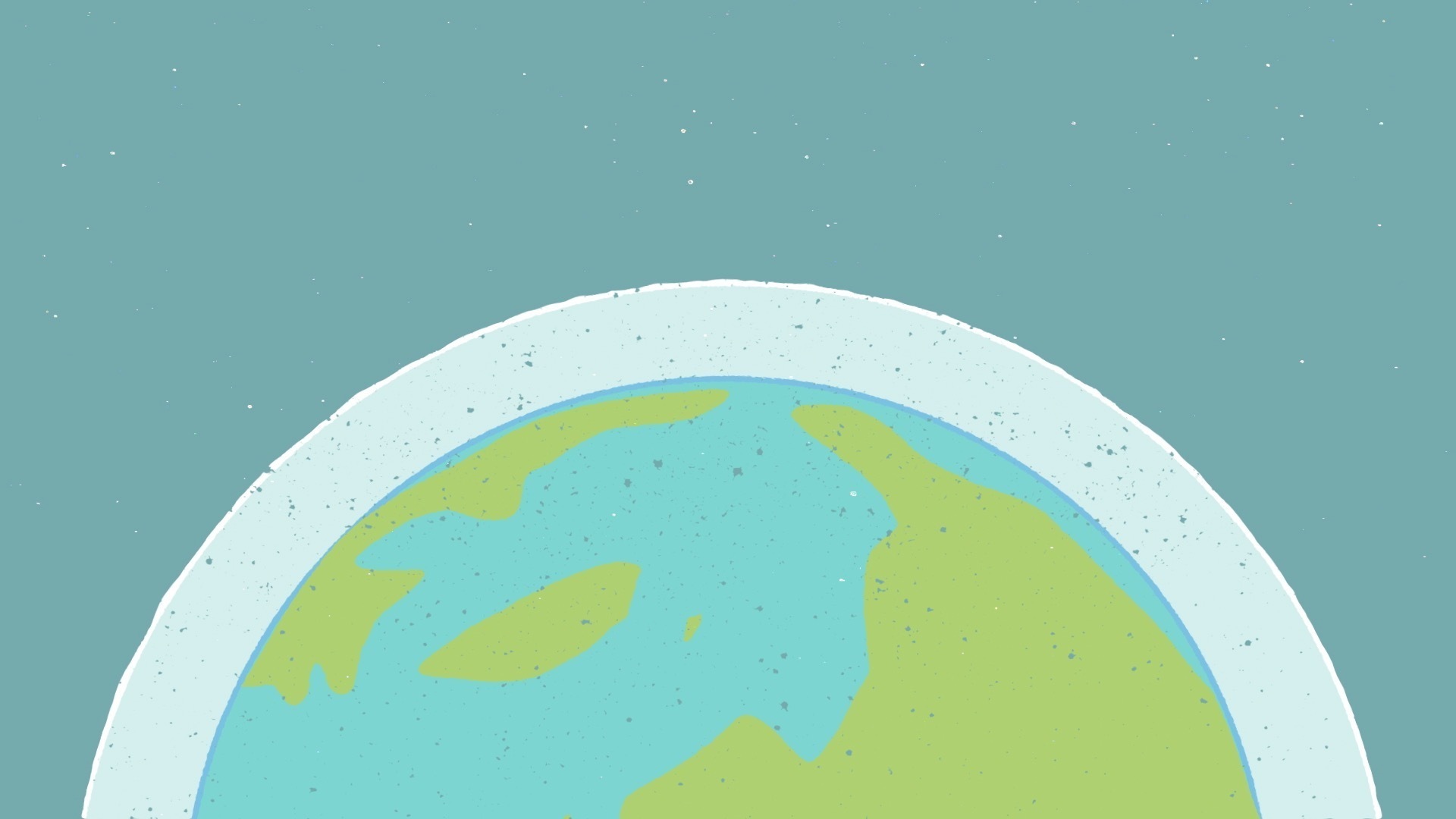 A climate feedback is an internal climate process that amplifies or dampens the initial climate response to a specific forcing (example: increase in atmospheric water vapor that is triggered by an initial warming due to rising carbon dioxide, which then acts to amplify the warming through the greenhouse properties of water vapour). If a process amplifies the climate response it is denoted as a positive feedback, if it dampens the response it’s a negative feedback. 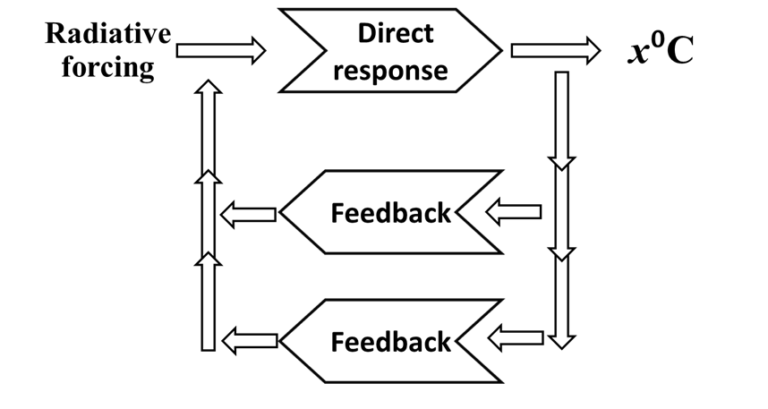 Figure: Schematic illustration of a feedback loop where a radiative forcing gives a direct response in temperature and initiates a series of feedbacks (positive and negative) that alter the final temperature response.

The direct response of an object to increased radiation is that it heats up and efficiently radiates back energy to dampen the effect of the increased radiation. This is done rather efficiently as the amount of radiation goes with the fourth power of the temperature. This is known as Stefan‐Boltzmann’s law. This strong response in emitted radiation helps make the earth rather stable to changes in the radiative forcing.

Water vapour induces a strong positive feedback in the climate system. State of the art climate models indicates that the water vapour feedback alone approximately doubles the warming from what it would be for fixed water vapour. 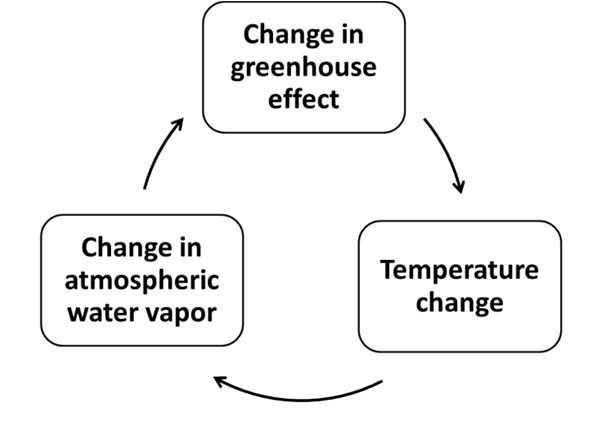 The lapse rate feedback is the coupling between surface air temperature changes and the changes in the region that radiate out to space (upper troposphere) , leading to a change in how much the atmosphere cools with height which again affects the efficiency of the greenhouse effect.

For the greenhouse effect to work the atmospheric temperature has to be colder in the region that radiate out to space than at the surface. If this temperature difference is altered it will change the greenhouse effect. The lapse rate feedback is connected to the water vapour feedback. The radiative effect of the water vapour is roughly proportional to the logarithm of its concentration, so the influence of an increase in water‐vapour content is larger in places which are dry, such as in the upper tropical troposphere (10‐20 km above ground). This means that the warming in this height is higher than near the surface. Because of this the temperature difference between the surface and the upper troposphere is reduced and the greenhouse effect will become less efficient, providing a negative feedback. The water‐vapour feedback and the lapse‐rate feedback are strongly connected as they both are related to changes in water vapour. They tend to partly compensate each other and are often combined. 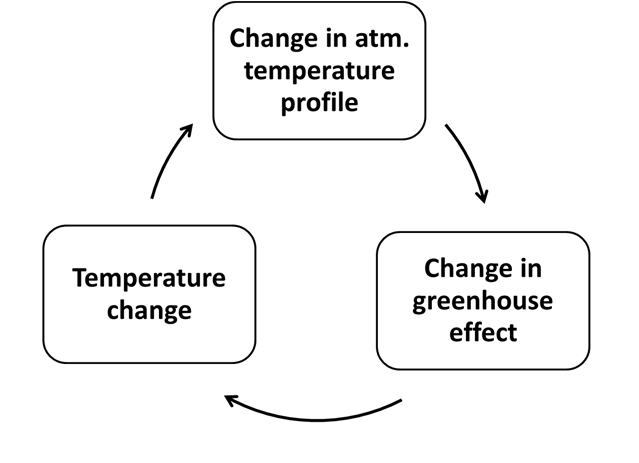 Cloud feedback is the coupling between cloudiness and surface air temperature in which a change in surface air temperature, leads to a change in the temperature and optical properties of clouds, which could then amplify or weaken the surface temperature change. Cloud feedbacks are many and complicated. The feedbacks can be grouped in two: Clouds are good absorbers of terrestrial radiation (radiation from the earth) and reduces the amount of radiation radiated back to space. This has a warming effect. At the same time clouds reflect solar radiation and thereby cooling the earth. State of the art climate models finds the total cloud feedback to be slightly positive. 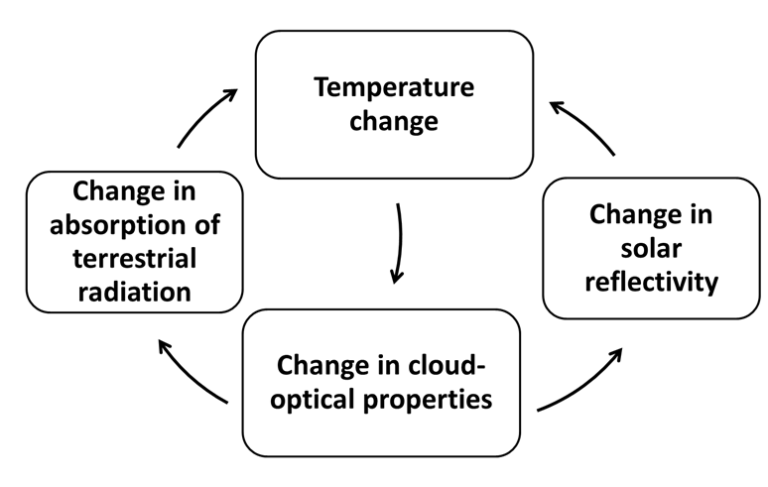 The albedo feedback is the coupling between changes in surface reflectivity and surface air temperature in which a change in surface air temperature may lead a change in the surface reflectivity (changes in snow cover, sea ice extent, vegetation) , which could then amplify or weaken the surface temperature change. State of the art climate models finds the albedo feedback to be positive due to the influence of changes in temperatures on snow and sea ice. It should be noted that the strength of the albedo feedback is dependent the strength of the solar radiation reaching the surface. For example the same change in snow cover over a region with strong solar radiation (for example a location with a lot of clear skies, or a location close to equator) would give a stronger feedback than a change in snow cover over a region with less solar radiation. 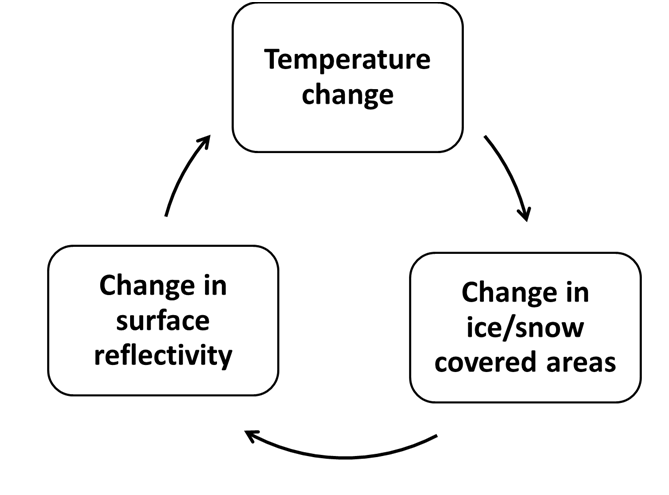