What are the definitions, origins and measurement of circular economy?

In this article, we want to find out the concept of Circular Economy: What does it mean? What is its origin? And how can it be measured? 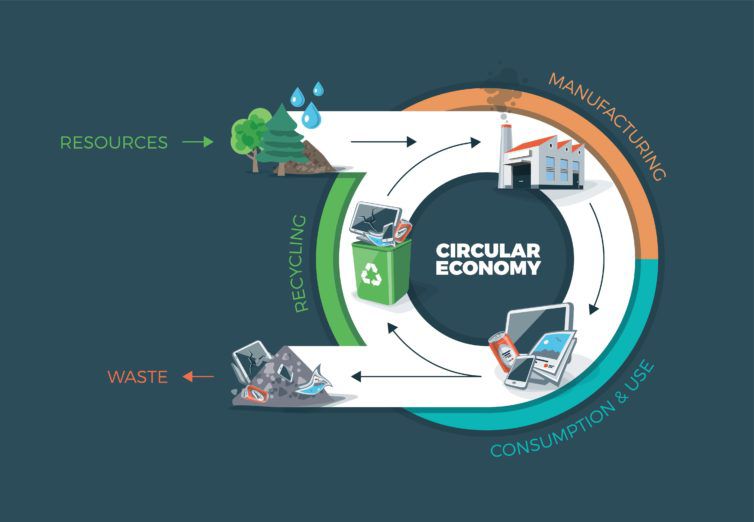 Definition and frameworks of Circular Economy

In a linear economy, production unfolds with one paramount direction: factory inputs stem from natural resources, and after being processed to goods and purchased, products are often disposed of after a single-use. This economic model of linear production and consumption consisting of “take-make-use-dispose” phases, is not sustainable in the long term. Moving towards a Circular Economy is necessary, also because it is a building block of sustainable development, bearing significant potential to contribute to environmental quality, economic welfare, and social equity for current and future generations. So far, only 8.6 % of the world economy is considered circular. The most used definition of Circular Economy builds on the 3R framework: reduce, reuse and recycle. Others extend it to a 4R framework by adding ‘recover’ to these principles of circular economic activities. According to the European Commission’s Circular Economy Action Plan, Circular Economy is described as the preservation of product value, materials, and resources in the economy for a long time period with decreasing production of waste. According to Kirchherr and colleagues (2017), Circular Economy is an economic system that substitutes the concept of “end-of-life” with reducing, reusing, recycling, and recovering materials in the processes in which products and services are produced and consumed. These authors explain that Circular Economy operates at three levels: the micro level, which refers to single customers or companies; the meso level, which refers to eco-industrial parks; and the macro level, which captures anything between cities and nations. Later in this week, you will learn more about how Circular Economy is implemented at these three different levels.

The framework by Elia and colleagues (2017), shown in Figure 1, can be used to support the measurement of the adoption of Circular Economy. According to this framework, there are four action components involved that support Circular Economy adoption:

As we can see, there are diverse elements that make up the concept of Circular Economy, and we have now explored some of them. The concept of circularity has also diverse historical and philosophical origins, which we will explore next.

The concept of Circular Economy does not have a single starting point or author, but rather a several authors from different schools of thought have participated in its development. Examples of authors are Michael Braungart and William McDonough, whose book “Cradle to Cradle: Remaking the Way We Make” was published in 2002, and Janine Benyus, whose book “Biomimicry: Innovation Inspired by Nature” was published in 1997. The development of CE is, amongst others, related to the following schools of thought:

How can CE be measured?