In this article, we provide an overview of key historical events relating to climate change adaptation. 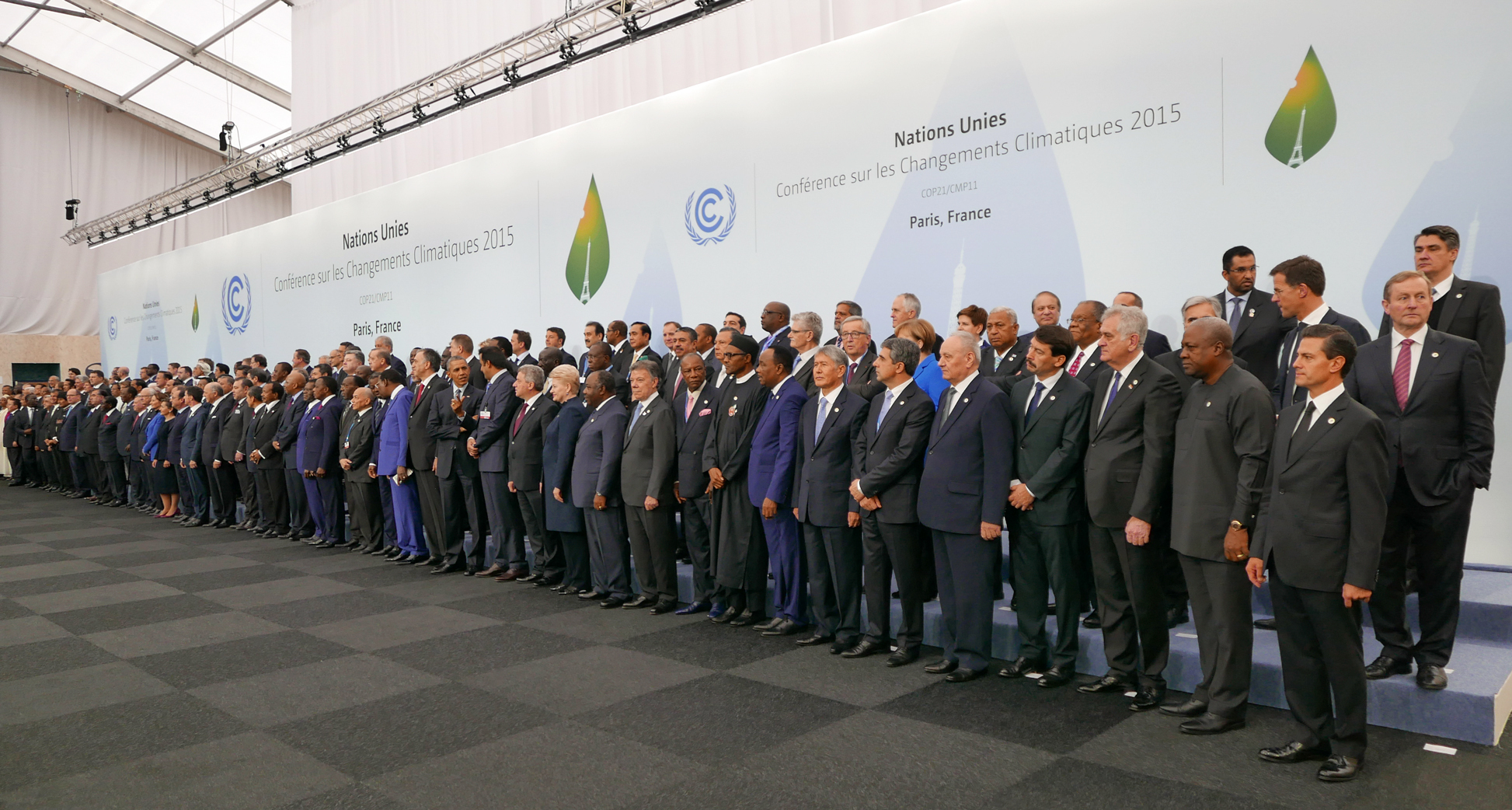 The connection between governance and climate adaptation is given by the following definition developed by Termeer et al., 2017:

Adaptation to climate change is not only a technical issue; above all, it is a matter of governance. Governance is more than government and includes the totality of interactions in which public as well as private actors participate, aiming to solve societal problems. Adaptation governance poses some specific, demanding challenges, such as:

View Course
In the figure below, we see that climate adaptation takes place on different administrative levels (global, regional, national and subnational). It also involves many actors and different scales of the adaptation problem. 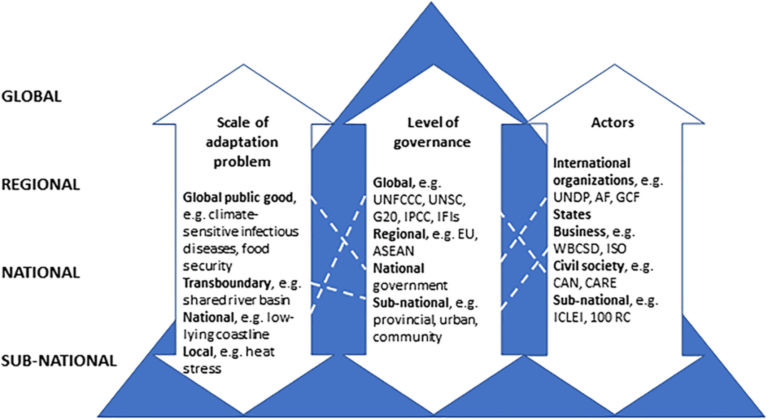 Let’s start with an overview of the developments made in climate adaptation governance on a global level;
Following the Brundtland Report of 1987, there was a global consensus that there is a reason to rethink the management and use of finite natural resources. This, coupled with growing evidence of climate change, led to the establishment of organisations to guide and develop strategies to deal with the adaptation challenge. We provide you with a summary of key global responses to climate change in chronological order (only meetings with significant adaptation related agreements are included in the list).
In 2015, the Paris Agreement marked a major turning point in climate adaptation governance. It was a realization that although mitigation could reduce the effects of climate change, adaptation strategies were required to create new normal, and reduce the rate of environmental deterioration due to climate change. The developments for climate adaptation on the global level are closely connected to meta-regions such as the European Union and national levels due to the Conference of Parties (COPs). There is more information on COPs in the summary. Please read it. In addition, you can also have a look at the list of all the COP meetings.

This brings us to a review of sub-national climate adaptation governance. On the sub national level, the administrative units are also referred to as regions. These sub-national regions may be in the form of provinces, counties, districts, villages and even neighbourhoods.
From the earlier given definition of climate change adaptation, we can deduce that it involves both private and public actors. Citizens expect their governments to protect them from the impacts of climate change. However, the challenge is whether governments are able to promise this protection, and what do they expect from citizens and businesses?
There are many theories about governance arrangements such as legal issues, adaptive policies development and science-policy relations. Nevertheless, we lack practical evidence of how to make adaptive governance arrangements. In general, governance arrangements may be defined as a collection of

rules, process, and instruments that structure the interactions between public and/or private entities to realize collective goals for a specific domain or issue

The climate adaptation decisions made at national levels and above, need to be implemented in the sub-national regions. National levels provide guidance through national adaptation policies and fiscal allocation. However, these policies are implemented in the subnational regional areas such as cities, districts and provinces. The lower levels have their own procedures for implementation of climate adaptation strategies. The procedures involve many actors and stakeholders such as councilors and other government officials, private actors, non-governmental organisations and the public. 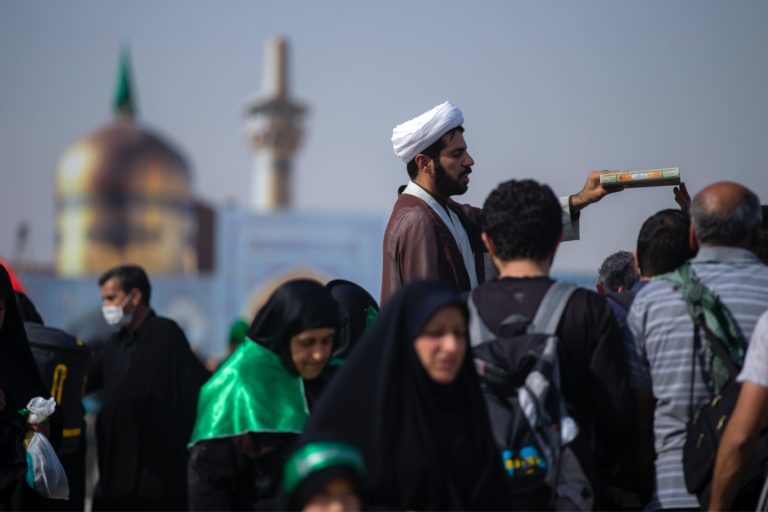 Implementation of adaptation policies in the sub-national region is difficult. The challenges faced can be grouped into three broad categories:

The development and implementation of climate change policies and strategies involves different stakeholders and actors. These players may come from government, business, civil societies and the public. They might also come from different government sectors and national institutions. In a previous step we observed that climate change affects different sectors such as agriculture, health, energy supply, spatial planning and water management. Therefore, climate adaptation also involves these different sectors. The sectors are related to different policy systems and administrative levels. These have different formal and informal rules, many goals and finite resources. The complex environment of divisions within governance make formulation of climate adaptation policies difficult. For example, to address flooding in a city, you require attention to policies about urban spatial planning and water management. These policies belong to different administrative levels with different procedures and actors.

Due to these divisions, many stakeholders and actors, and different ways of working, the policy development for climate adaptation may encounter opposition. The opposition could take the form of bureaucracy or conflicts over responsibilities of the different sectors/actors. In the instance of climate adaptation policy, some approaches favour mono-centric governance systems to by-pass the divisions. However, mono-centric governance systems (also known as top-down or centralized) have disadvantages. They are less able to adapt and anticipate changes, and learning in this system is slow. The concept of polycentric systems (multi-level and multi-actor) allow for more flexibility, but we will discuss this later in the course.

These questions contribute to bureaucratic/political struggles about jurisdictions, procedures and budget allocations. What is clear is that specific adaptation policies are required to address the urgent need occasioned by climate change effects. Nevertheless, to include climate adaptation strategies in existing policy streams (‘mainstreaming’) is a challenge.

3. Inherent uncertainties in a knowledge-intensive domain

In order to develop appropriate climate adaptation approaches, policy-makers need reliable knowledge on the changing climate and future predictions. In a previous step we discussed controversies surrounding data and models of climate change. Despite these controversies, decisions about climate change adaptation need to be made. The uncertainties about the kind and scale of risk make it even more difficult for stakeholders and actors to agree and design adaptation solutions. Another big disadvantage is that data and models on climate change are usually collected on a global scale, making it difficult to translate them into sub-national levels, where policies need to be implemented. It also makes it hard to institute legitimacy to climate adaptation strategies already being implemented, if effects are not yet visible locally. This kind of policy development requires a combination of long-term adaptation goals with short-term urgent action.

In conclusion, climate change presents complex governance problems including, having various stakeholders and actors, changing political agendas and budgetary limitations. These difficulties require concepts to guide development, testing and implementation of new governance arrangements. There are a variety of approaches developed by non-governmental organisations and meta-regional arrangements.

Mike Hulme, Why We Disagree about Climate Change: Understanding Controversy, Inaction and Opportunity (2009).