Introduction of the LDCF and SCCF organizations and case examples of projects funded.

There are two funds that cater for specific countries and goals. You might have heard of them. Let’s explore a little more what they are aiming at.

The Least Developed Countries Fund was established in 2001 by the United Nations Framework Convention on Climate Change (UNFCCC). Its goal was to provide technical, financial and institutional support to Least Developed Countries (LDCs), as they tackle climate change impact. The target sectors include water, agriculture and food security, health, disaster risk management and prevention, and fragile ecosystems.

Case example: The Least Developed Countries Fund (LDCF) with support from the United Nations Development Programme (UNDP) assisted local communities in Somaliland overcome increased incidences of drought. Water is a vital resource for the Somali people. In addition to drinking and cooking, water also enables maintenance of livelihoods through livestock keeping and agriculture. Below you will find short testimonials from households on the impact of reliable access to water. This access was achieved by small-scale projects including construction of over 800 dams, dykes, storage tanks and other projects; which were funded by the UNDP and LDCF. The LDCF leverages synergies and multiple goals.

The Special Climate Change Fund (SCCF) was also established in 2001. It complements the Least Developed Countries Fund, but unlike the LDCF, its support is open to all vulnerable developing countries. It has a portfolio of more than 350 million dollars and 85 projects globally. It prioritizes adaptation, but also funds, through separate financing, technology transfer, and mitigation in selected sectors. For example; energy, transport, industry and agricultural sectors. 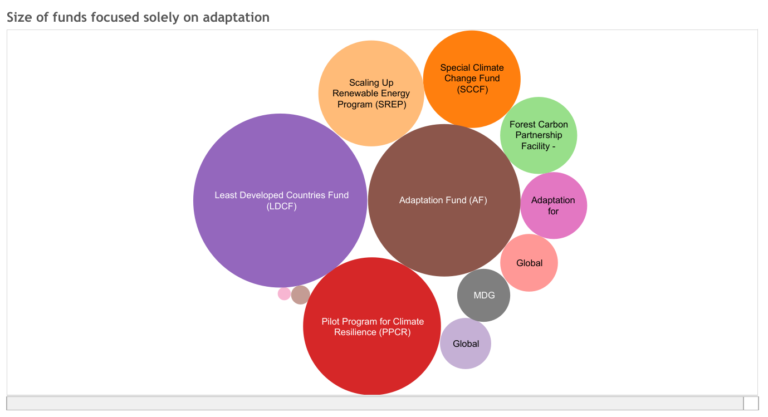 Summary of distribution of climate adaptation funds globally. This image and data is courtesy of Climate Funds Update

One concept that sometimes works hand in hand with adaptation strategies is Resilience. Resilience may be defined as

the ability of a system to absorb, withstand and bounce back after an adverse event. In the environmental context, it is the collection of policy, infrastructure, services, transportation, energy infrastructure, and planning that position municipalities to resist natural disasters and other dangerous impacts of climate change.

Both the LDCF and SCCF are administered by the Global Environment Facility (GEF). You will read more on the GEF later in this week. The GEF has separate objectives for the two funds as depicted below.

Objectives for the LDCF:

Objectives for the SCCF:

Provide support for adaptation in developing countries through:

These two funds support national adaptation plan development and implementation. They focus on small scale local projects. However, the demand for funding greatly outweigh the funds available in the two organizations.

Can you think of initiatives or projects in your country that may benefit from funds from this organizations? Does your country qualify for these funds? Please share your opinion with fellow learners.