Earth’s atmosphere is largely composed of Nitrogen (78%) and Oxygen (21%). Trace elements such as argon, carbon dioxide, methane, nitrous oxides, and other gases make up the remaining 1%. 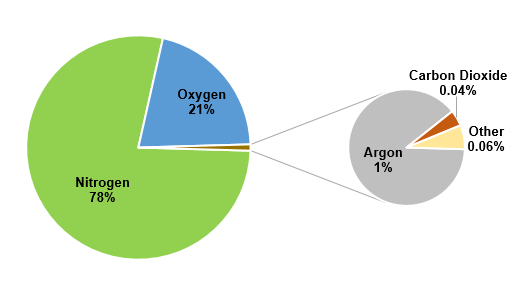 Despite carbon dioxide playing such an important role in climate change, it makes up only around 400 parts per million (ppm) in the atmosphere. It is released naturally in the carbon cycle through volcanoes and respiring organisms, but anthropogenic activities (especially fossil fuel burning and deforestation) are increasing CO2 levels at an unprecedented rate. It has already increased in concentration from 280 parts per million (early 1800s level) and together with the fact that it is very long-lived in the atmosphere, this makes it the most important greenhouse gas produced by human activities.

Methane is even scarcer than CO2, making up only 1.8 parts per million of the atmosphere, but it is important because each molecule contributes around 25 times more to warming than a molecule of CO2, and the amount of methane in the atmosphere has already increased nearly 3-fold due to human activities. Methane is created by microorganisms, where decomposition (the breakdown of organic material) occurs in environments absent of oxygen – such as in rice paddy fields or the guts of ruminants, such as cattle.

Nitrous oxide is around 300 times more potent molecule-for-molecule than carbon dioxide, but makes up a very small (0.3ppm) part of the atmosphere. It is made by microorganisms that are fueled by the addition of nitrogen fertilisers to agricultural land. Even though it makes up a small fraction of man-made greenhouse gases, the fact that human activities have increased its atmospheric concentration by about 15%, and it is a very long-lived gas, makes it important to tackle to fully get emissions under control.

Ozone is also a greenhouse gas when it is formed near the Earth’s surface by pollution. This is very different to the role it plays higher up in the atmosphere where the ozone layer protects life on Earth by blocking ultraviolet radiation from the Sun. Each ozone molecule near the surface has around 1000 times the warming potential of carbon dioxide, but there is much less of it and it is very short lived, so it is not as much of a problem. Vehicle emissions react in sunlight to form ground-level ozone. Ironically, the long-lived molecules that deplete the ozone layer higher up in the atmosphere, such as CFCs, are also potent greenhouse gases.

We describe the effect of increasing the blanket of warming gases around the planet as radiative forcing because it traps more heat radiation.

The effect of increasing greenhouse gas concentrations has been known for a very long time. This article from 1912 already begins to develop the links between burning fossil fuels, carbon dioxide emissions and the blanket effect. 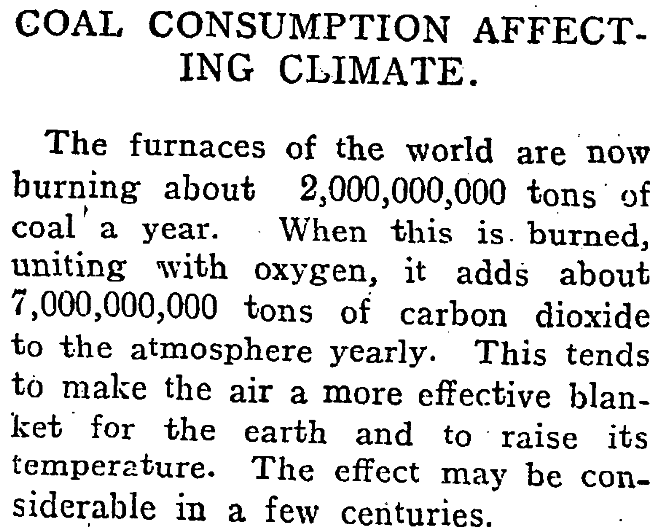