A common challenge in developing climate intelligence for business lies in connecting the raw climate data to the problem of interest.

For example, it’s well established that the demand for electricity from domestic users increases under both very cold and very warm conditions. It’s therefore possible to exploit this relationship between temperature and demand to ‘convert’ a meteorological time-series of data into an estimated demand time-series. Similarly, there are situations (eg insurance, public health and disaster relief management) where contingency plans are activated or claims are expected.

This challenge can be seen as an impact-modelling problem in the following form:

The precise forms this modelling problem takes can be many and varied, and it’s beyond the scope of this course to discuss impact modelling or subsequent decision-making process. However, it’s important to be aware of the process for converting raw meteorological data into use-relevant information and the importance of calibration.

Many of the essential concepts of impact modelling can be illustrated by a simple thought experiment. Consider a relatively new business that sells ice creams. To keep things simple, assume that the business attempts to sell ice creams every day in summer (June-August) and that sales vary from day to day but tend to increase on warmer days. Let’s also assume that the business has no competitors and has been operating successfully for the last four summers. The owner is interested in planning ahead for next year and wishes to estimate how the total summer sales revenue would be impacted by a ‘worst case’ cool summer.

A sensible first step would be to use historical weather data (such as reanalysis – see Step 2.2) to assess sales had the business been operating for more than just four years. First establish the relationship between daily sales and temperature in the recent period (the four years for which the business has been operating) as we know there is a good physical reason to expect a strong connection – people are more likely to buy ice cream when it’s hot. Once this relationship has been quantified in the recent period, we can then determine how past weather would have impacted the expected sales. 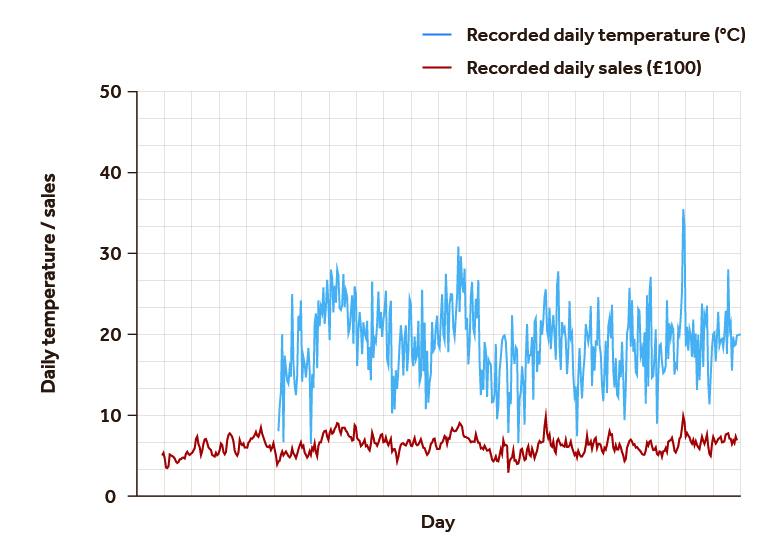 In (a), the raw daily records of sales over four summers (blue line) are recorded alongside a small section of daily temperature data from a reanalysis (red line, which can be extended back much further than shown).

The relationship between the temperature and sales in the period where the records overlap can be clearly seen by plotting the daily sales against the daily temperature and estimating a best fit or regression line (b). 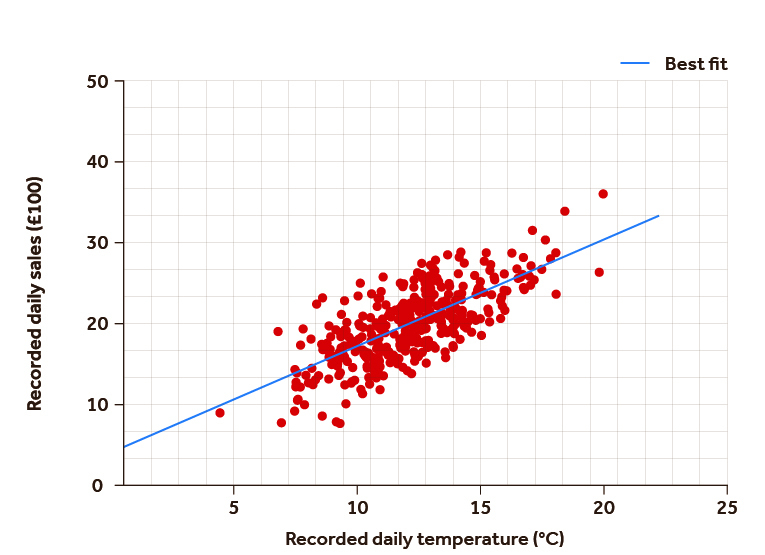 This regression line then becomes our ‘impact model’ which can be applied across the much longer reanalysis temperature record enabling the total summer sales to be estimated for a large number of years (c). (Compare the ‘modelled’ blue line with the much shorter ‘recorded’ red line). 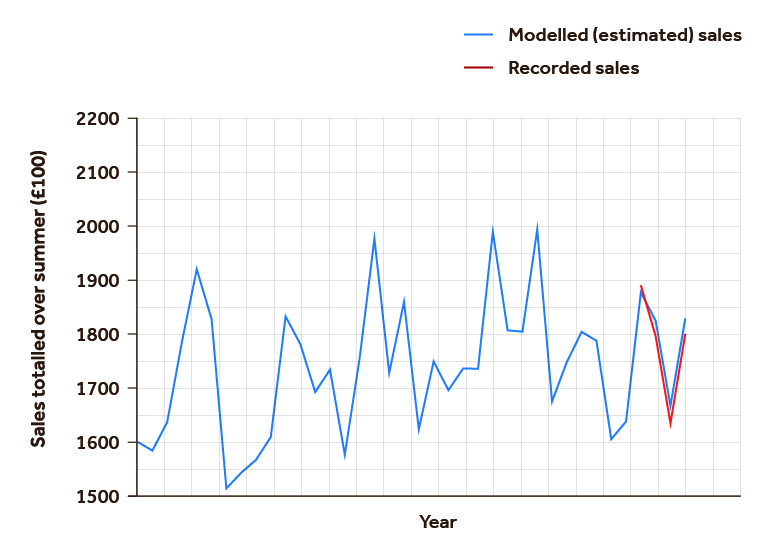 Note that the ‘worst’ summer in this modeled sales data has rather lower sales than has been observed in the recent period – providing immediately useful contextual information to the business. It’s however, clearly possible to extend this analysis to consider other aspects of sales including; mean, variance, best case, likelihood of consecutive poor sales years, etc.

In the next Step, you’ll explore how the same ice cream business could plan for the longer term.