Learn more about the concepts of industrial colonisation and exploitation. 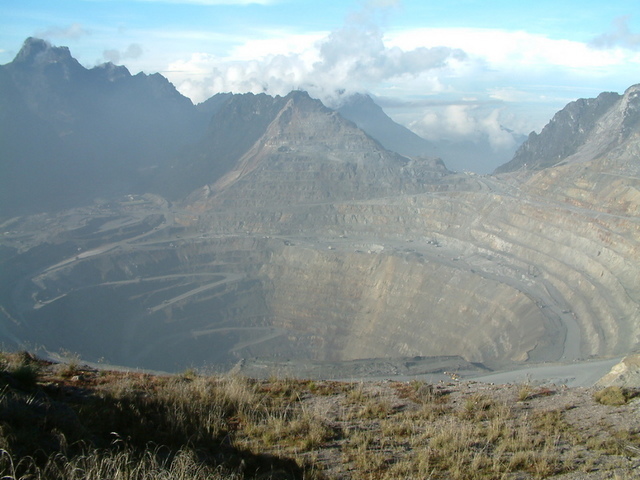 We might often only think of colonisation occurring with one nation state taking over another in a sovereign way. This is perhaps a historically accurate way to refer to colonisation, but a much more pervasive form in recent times has been that of industrial colonisation. Typically, the coloniser might be a corporation who provides infrastructure for the colonised country, the act of which then provides cover for them to exploit e.g. the building of hospitals, schools, roads etc. In recent times there have been some good examples of where companies have themselves become the coloniser, and with reference to two examples we will make this apparent.

In 1969 West Papua was handed over from its Dutch colonisers to Indonesian control denying them independence. This has led to a great deal of exploitation, and huge human rights abuses. It is estimated that almost half a million indigenous West Papuan’s have lost their lives because of this since 1969. This has largely been aided and abetted by US mining companies, of whom Freeport is a well-documented example. They still operate in West Papua to this day, having begun mining in the early 1970s.

West Papua is home to the largest reserve of gold in the world, and the second largest of copper. Since the early 70s, and certainly up to the mid-1990s, Freeport was effectively the administrative authority within West Papua. They have built large towns, schools, hospitals in the region, but in their mining operations have displaced indigenous Melanesians from their natural habitats, and have polluted the rivers; copper accumulations in the main river have increased 40 times since 1950. This exploitation has resulted in a lot of resistance from indigenous Melanesians, and calls for independence. This form of industrial colonisation is very real to the Melanesian people, and is happening today. In 2020 there was renewed resistance around the Black Lives Matter movement, with their own ‘Papua Lives Matter’ demonstrations taking place simultaneously with Black African Americans.

Another example of industrial colonisation is the uranium mines of South Africa. Since the 1940s, and because of the pursuit of nuclear power and weapons, both the USA and Great Britain signed agreements with South Africa to exploit uranium deposits. Since then many other countries, including India, have expressed interest in uranium mining in South Africa; a list of recent projects and human rights abuses because of these projects are listed here. Many companies, having devested in uranium mining for various reasons, abandoned the mines which have left terrible pollution and suffering for the mainly poor Black communities that have to live nearby. These people are, on a daily basis, exposed to dust, water contamination, and other associated health risks. Poor communities have no choice but to live in proximity to the old mines as they cannot afford to move to other regions. Johannesburg currently takes its water from >300km away because of the contamination of groundwater supplies, but these options are often not open to local inhabitants. These communities have no choice but to use their own local water supplies, which are known to be polluted. So, the effects of industrial colonisation are felt long after the coloniser has left.

It is these forms of industrial colonisation that have historically shaped the colonised and post-colonial world. In this context, decolonisation then not only becomes an act of learning about the process by which the colonisation occurs, but in a science and engineering context the depollution and filtering of water supplies, the removal of engineering projects, and the remediation of pollution etc.

This leads us to think about how neo-colonialism might occur in the future, with the advent of the online industry, how might companies in the future enact a form of electronic or digital colonisation? This is in fact already happening. The displacement of local news, and digital providers is happening at an alarming rate, with great parallels with the industrial colonisation of the past. Large corporations and network providers are effectively able to control what is read, and who can contribute to content. These parallels with a physical colonisation of the past include the use of algorithms which might exclude certain groups from accessing content, which effectively make the company the jurisdiction, rather than a nation state. Extraction of the data is hidden, especially if people have no access to the code, to the algorithms, that control content. The use of eye movement recognition, and inbuilt racist or biased algorithms could effectively exclude voices, and marginalise non-white and indigenous local knowledge. Digital colonialism has the potential to embed systemic racism and subsequent inequalities for a long time to come, and virtually nothing is being done to prevent it happening.