Find out more
Home / Teaching / Decolonising Education: From Theory to Practice / In what ways are STEM subjects colonised?

In what ways are STEM subjects colonised?

Read this article to explore the ways in which STEM (Science, Technology, Engineering, and Mathematics) subjects are colonised. 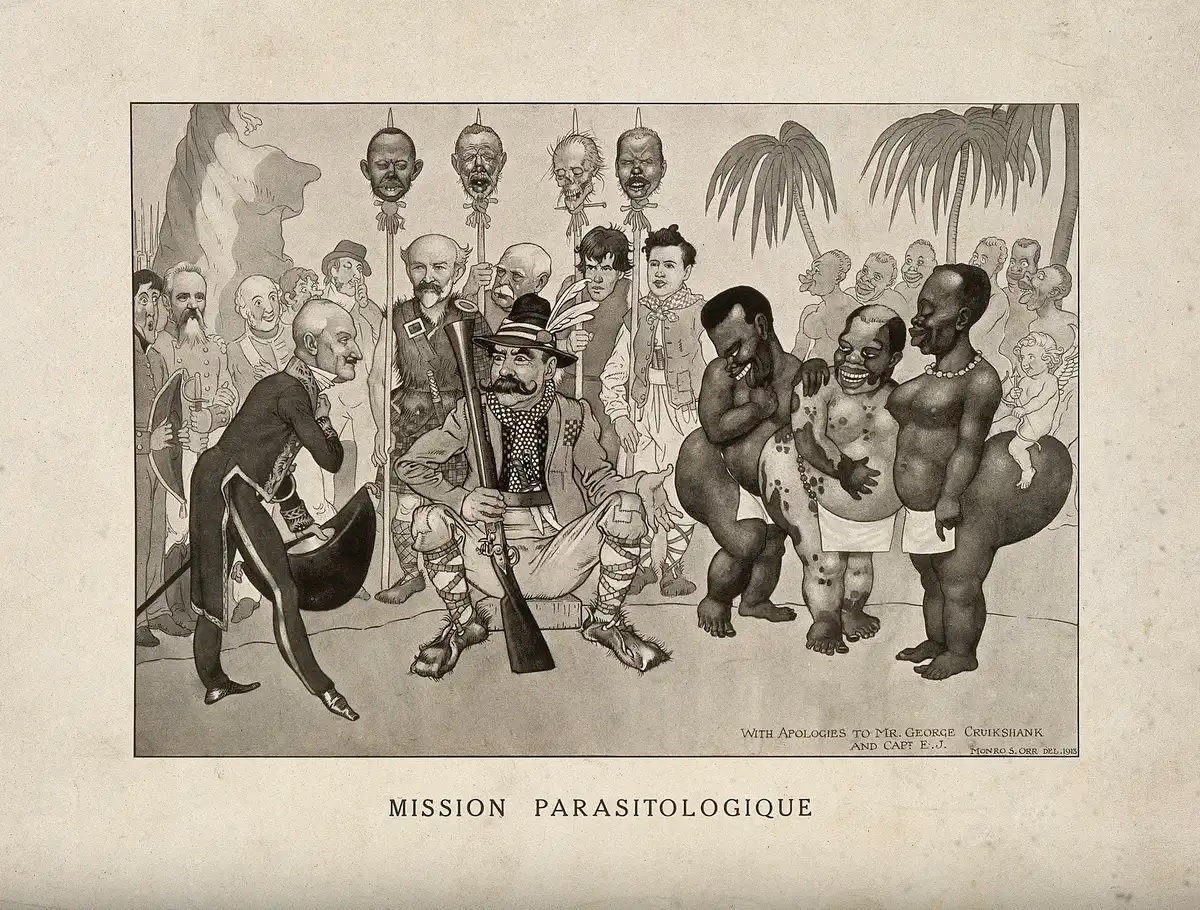 We might think that Science, Technology, Engineering, and Mathematics (STEM) just deal in facts, and objects. But the subjects themselves were developed over time, by people, and sometimes with specific intent.

For instance, the concept of race, and the support of the idea of a racial hierarchy was supported initially by the concepts of evolution, genetics, and human biology. People such as Samuel Morton (1799-1851) cultivated these ideas.

The Transatlantic Slave Trade relied heavily on a justification of the lack of humanity attributed to enslaved Black Africans. These justifications were supported by early notions of an evolutionary hierarchy.

In fact, racist depictions of the primitive ways of African people, in relation to the ‘superior’ white European scientists show this clearly (see image) well into the 19th century.

We might be misguided in thinking that these concepts do not survive to the present day. The whole idea of race is linked to genetics, and thereby implicitly a hierarchy, recently reared its head again in light of the Covid-19 pandemic.

During the pandemic, it was noted that statistically, Black, Asian and Minority Ethnic (and particularly Black) people were more susceptible to mortality from the disease than their white counterparts. Early narratives, although debunking the idea of a genetic difference, still pointed to studies that explored this possibility.

These ideas go back to incorrect concepts of race being genetic, rather than it being an entirely social construct. The differences in mortality rates for Covid-19 are related to systemic racism resulting in less access to decent housing and health care. So references to genetic differences are in effect manifestations of earlier colonial and scientific arguments.

STEM subjects can struggle to decolonise curricula because of cultures of ‘whiteness’, and white-centred narrative. This culture of ‘whiteness’ in STEM has been well-documented and awareness of it is contested amongst racialised groups.

In the UK, the culture of ‘whiteness’ is related to the fact that the diversity of the students undertaking, and staff researching, and teaching these subjects in universities is low. According to recent (2018/19) Higher Education Statistics Agency (HESA) data, over 80% of the staff undertaking teaching and research in the UK were white.

So, questions of what a scientist, an engineer, a mathematician might look like skew the view of identity within these disciplines. Falsehoods like the fact that mathematics requires talent over hard work have been reported to discourage particularly Black students from undertaking the subject.

The low number of Black students in STEM subjects

Low numbers of Black students in STEM subjects further enhance their lack of identity within the subject. Although decolonising should not be confused with equality, diversity and inclusion (ED&I) initiatives, there is a need to widen the scope of who teaches STEM subjects.

A wider range of perspectives of what engineering is, what science means, and how technologies impact when intersected with race, religion, class and culture is required, particularly when it comes to tackling issues such as climate change and most recently the Covid-19 pandemic.

Historically, modern-day STEM subjects e.g. mathematics, physics, engineering, have been presumed to have come about through mainly Western European enlightenment. Or at least this is the way we teach some of our STEM subjects.

The historical narrative is rarely considered alongside the teaching of science, engineering and mathematics. The role of these subjects, and their historical development, as active tools of racism, particularly systemic racism, are often overlooked.

A critical race theory (CRT) approach to STEM subjects is much needed, with a challenge to ‘whiteness’ and its power and privilege played out in the development of technology and scientific breakthroughs.

Embedded structural racism in mathematical algorithms has the potential to do great harm. Industrial colonisation beyond physical engineering infrastructure, into the digital realm, has the propensity to further deepen inequality.

While connecting people, these worrying trends could have a lasting impact as forms of structural racism, and with their roots embedded in historical colonialism.