Statistical definitions can be drawn on to determine whether an activity or psychological attribute deviates from the norm in society
© Coventry University. CC BY-NC 4.0

What is statistical infrequency and how does this help us to define mental health issues?

Researchers can use statistics to determine what is normal and abnormal. Statistical definitions can be drawn on to determine whether an activity or psychological attribute deviates significantly from the statistical norm in society.

If someone is classed as normal they score in line with the statistical norm, whereas if they are ‘abnormal’ they display an attribute that appears infrequently in the statistics. For instance, when considering intellectual disability, if an IQ score is substantially under the norm of 100, this has been used in the past as one criterion. 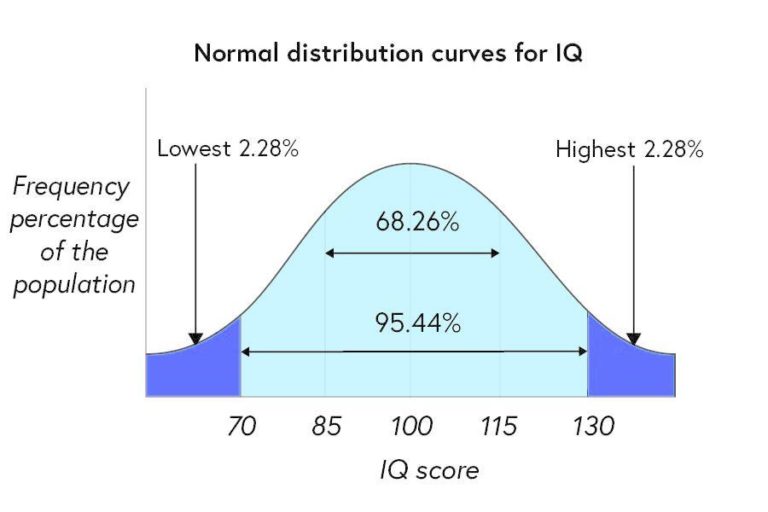 Above: a graph showing the distribution of IQ among the population. The statistical norm is 100 (the peak of the graph). 68.26% of the population have an IQ between 85 and 115

Problems with the statistical infrequency approach

The statistical approach can be useful in helping us to determine a cut-off point in terms of diagnosis because anything that appears outside of the normal distribution curve is statistically rare behaviour. There are, however, still a number of problems with defining abnormality simply in terms of statistical infrequency.

First of all, this definition fails to distinguish between desirable and undesirable behaviour. It is only concerned with the frequency of it. For example, a high IQ is just as statistically abnormal as a very low one, but may well be regarded as highly desirable.

In addition, implementing a definition of abnormality that is formed upon statistics can misguide people to believe that it is empirically objective and measurable. However, a subjective judgment is being made whenever the line is drawn between what is considered to be abnormal and normal.

Who decides what is statistically rare and how do they decide? For example, if an IQ of 70 is the cut-off point, how can we justify saying someone with 69 is abnormal, and someone with 70 normal? (McLeod 2018).

Using statistical methods to ascertain normality and abnormality can help us to understand how behavioural patterns are distributed through a population of people, but taken alone, this method might not be nuanced enough to define a person’s mental health as normal or abnormal. Just because a behaviour is statistically unusual, is it ‘abnormal’?