Understand and make sense of the signs and symptoms of depression using principles of Cognitive Behaviour Therapy.
© University of Reading

Throughout this course, we’ll be drawing on the principles of Cognitive Behaviour Therapy (CBT) to help us to understand and make sense of the signs and symptoms that your teenager may be experiencing, and the kinds of factors which may be keep their difficulties going.

The CBT approach is based on the idea that how we think (our cognitions, and the C in CBT) and how we behave (the B in CBT) are closely related to how we feel (and vice versa), so bringing about a change in one of these areas can case a shift in the other elements too: 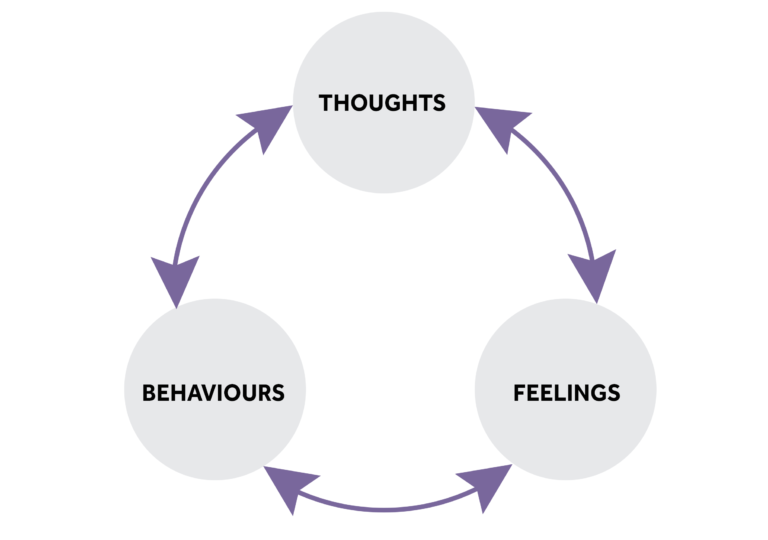 These interactions happen all the time, without us paying any real attention to the process. This leads on to another important principle of CBT; that people can find themselves in the same situation as each other and yet feel differently about it. We each think about things differently; it isn’t the situations that we find ourselves in that determine how we feel about things, it’s out interpretation of the situation that leads to how we feel about it and what we do in response to it.

We can think about this with some simple examples. Take the following scenarios:

You text a friend asking if they’re free to meet up for a coffee later in the week, but don’t hear back that day.

Let’s take a look at another example. Imagine that Jack plays a game of football. He plays in defence and they lose 5-2. How might Jack interpret this situation, and what impact might this have on how he feels and how he behaves afterwards?

Jack might have the following thoughts: ‘I’m hopeless at football. I’m a failure. No-one is going to want me in their team anymore.’ If he did have those thoughts, it’s likely that he would feel sad and low, and this might make him very reluctant to go to football practice the next week. However, if he thought ‘That was a tough match. They were a really strong side and I probably need to practice my slide tackles more next training session.’ He may feel determined and more likely to work harder at training next session.

CBT is all about understanding (in the first instance) and then changing the way in which a person thinks about and responds to events in the world, in order to impact how they feel about things. As anyone who has experienced themselves or supported someone with depression, trying to change the emotions is impossible – asking someone to ‘cheer up’ or ‘feel less sad’ is never going to work; CBT uses a number of tools which target thoughts and behaviours directly (thereby indirectly targeting the difficult emotions).

Hopefully by understanding your young person’s depression more fully, you’ll be in a better position to talk to them about their difficulties and be more supportive if they’re struggling.