Read this article to find out the important factors that influence decision making when using drone technology. 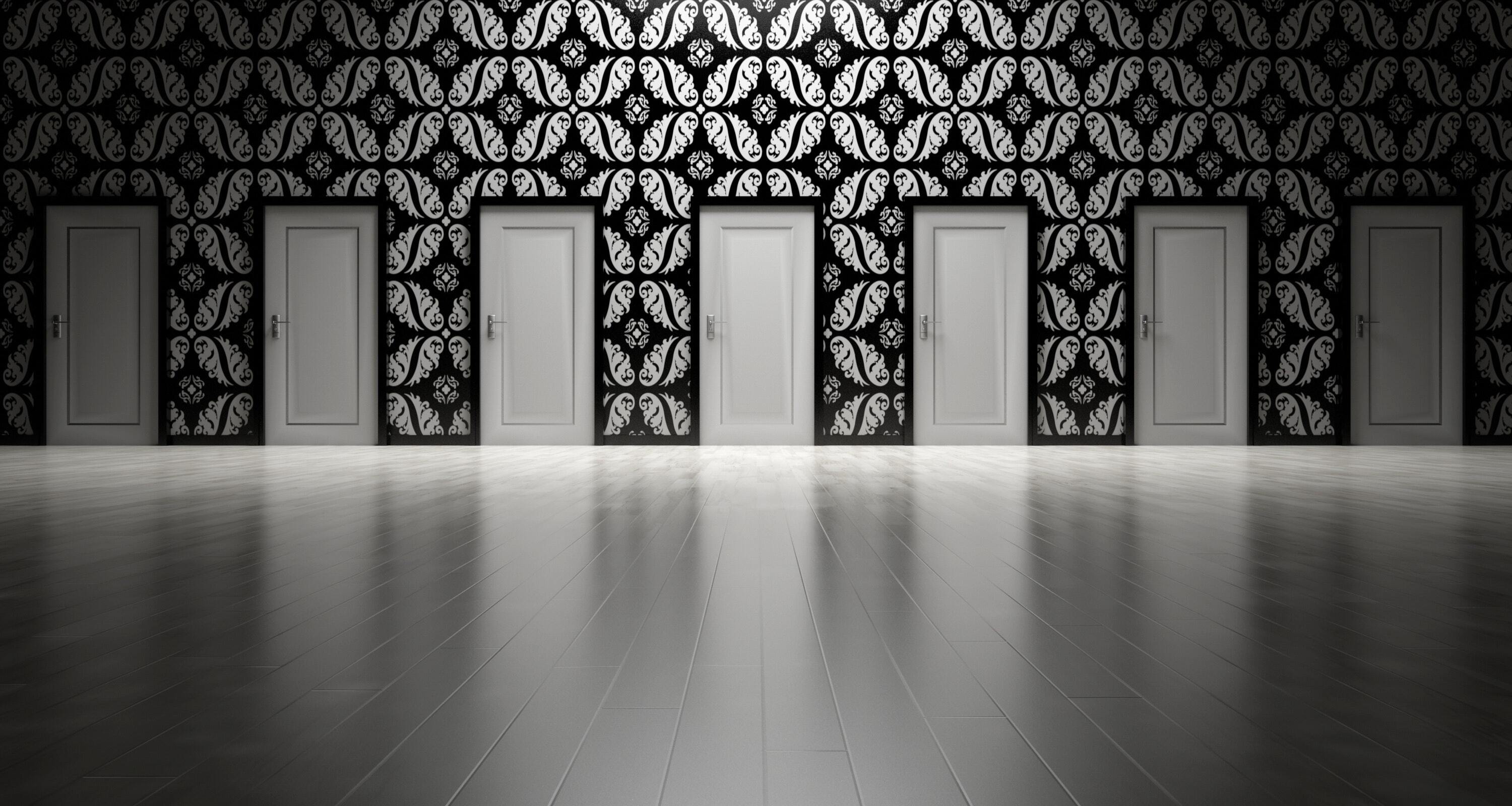 There are several important factors that influence decision making. Significant factors include past experiences, a variety of cognitive biases, an escalation of commitment and sunk outcomes, individual differences, including age and socioeconomic status, and a belief in personal relevance. These things all impact the decision-making process and the decisions made.

Your personality traits and factors combine with your values, needs and motivation as you navigate the world of decisions every day. Your “style” will inform whether you approach decisions rationally or emotionally, impulsively or cautiously, spontaneously or deliberately. If you have daring and adventurous components to your personality, you may find that you are quick, even impulsive in making decisions versus an analytic counterpart that may need to contemplate every angle before weighing in. 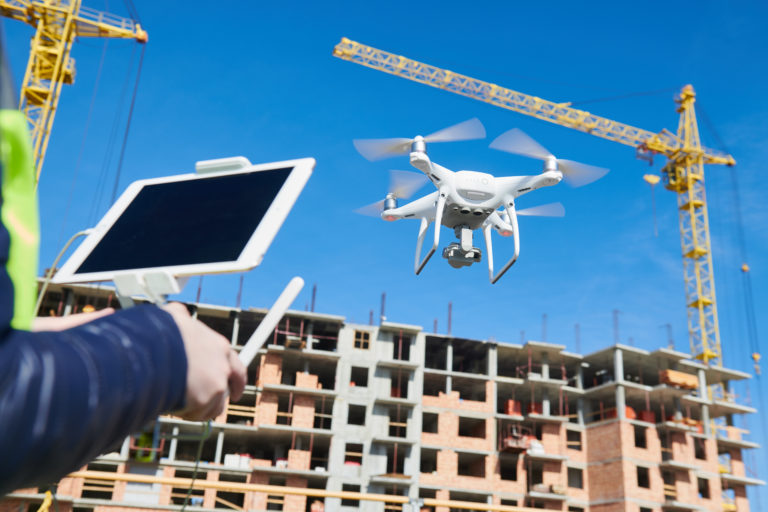 Pride is often viewed in a favourable light as it conjures up positive images such as a personal satisfaction after successful performance of a task.

Pride however, can degenerate into something quite negative as witnessed when athletes cheat and injure others in order to achieve success and bolster their pride.

In business and aviation, pride may inhibit our ability to receive correctional feedback which is important for correct decision making.

Similarly, peer pressure can be detrimental to our decision-making process when a tendency to conform to what other members of the group are saying rather than following your own judgement.

Employer pressure usually stems from a business’ needs to meet deadlines and be profitable. These needs can influence our decision making and in some instances compromise safety.

3 – Desire to get the task done

Sometimes a skilful aviator becomes used to “getting the job done” by acting slightly outside of the rule book when circumstances would indicate a more conservative approach. The commitment to getting the task done can be hazardous at times.

Stress and anxiety can be caused by a large number of factors in our lives. Contrary to popular belief that all stress is negative, stress can either be good (Eustress) or bad (Distress).

Eustress can harness better performances and provide the incentive for aviation personnel to achieve the task, to train harder to improve their standards to become the best in their job.

Distress on the other hand, affects people by bogging them down, causing them to lose focus doing time critical tasks in their area of work leading to accidents.

These may manifest in the following manner: 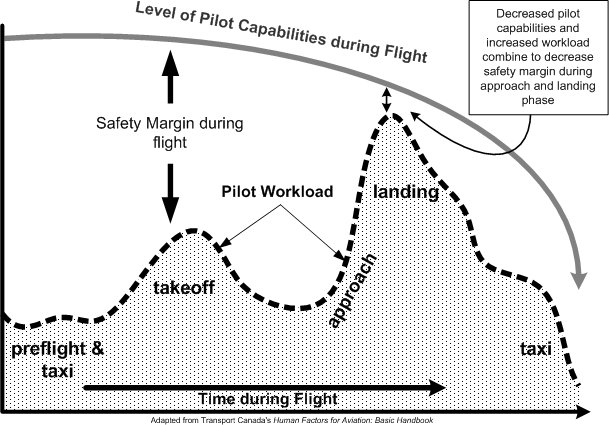 Figure 3: Pilot Stress during a flight

Over-confidence is the human tendency to be more confident in one’s behaviours, attributes and physical characteristics than one should be. In aviation, this can lead to complacency and poor decision making as the pilot can sometimes overrate his or her skills and as a result not give the situation enough respect.

Short-term memory is the ability to remember and process a small amount of information (typically around 7 items or even less) for short period of time (typically from 10 to 15 seconds, or sometimes up to a minute), and acts as a kind of scratch-pad for temporary recall of the information which is being processed at any point in time and at the same time. Performance can be enhanced by repetition, known as rehearsal, and chunking. Performance of short-term memory has been shown to be almost error free. Chunking is the organisation of material into shorter meaningful groups to make them more manageable, for example, a hyphenated phone number, split into groups of 3 or 4 digits. Typically information is transferred from the short-term to the long-term memory within just a few seconds.

Long-term memory is intended for storage of information over a long period of time and is consolidated semantically (i.e. based on meaning and association). Despite our everyday impressions of forgetting, studies suggest that long-term memory actually decays very little over time, rather it just becomes increasingly difficult to access or retrieve certain items from memory.

Memory shortcomings can clearly affect decision making. Perceiving something incorrectly may mean that an incorrect decision is made, resulting in an inappropriate action.

Human memory is fallible, so that information

7 – Aides memoire and rules of thumb

It is generally better to use manuals and temporary memory aids rather than to rely upon memory, even in circumstances where the information to be remembered is relatively simple.

When operating an RPA, it is important to apply checklists and standard operating procedures rather than rely on memory to prevent and manage errors.

Emergency procedures and checklists can help manage errors when the RPAS enters an undesirable state before the problem escalates. They also help operators stay focussed on efficiently managing the task when pressure is high.

An important part of managing workload is recognising a work overload situation. The first effect of high workload is that the pilot begins to work faster. As workload increases, attention cannot be devoted to several tasks at one time, and the pilot may begin to focus on one item. When a pilot becomes task saturated, there is no awareness of inputs from various sources, so decisions may be made on incomplete information, and the possibility of error increases.

Decision making is largely affected by skill and experience. Experience tends to arm us with very useful information when making decisions. Conversely, a lack of experience in certain situations can lead to stress which can negatively impact the decision-making process.

Skill, together with experience and currency is important as a pilot will be able to perform most tasks with a level of automation. This frees up capacity for the brain to perform other tasks or solve problems.