Learn more about the Edmonton obesity staging system.
View transcript
1
SPEAKER 1: This short video provides a summary of the Edmonton Obesity Staging System, or EOSS. Historically in clinical practise, obesity has been considered in the context of body mass index, or obesity class. This is an anthropometric measure based on predetermined normal values set by the World Health Organisation, starting with underweight, normal weight, overweight, and then obesity class I, II, and III. However, body mass index does not directly assess body fat, and so it’s not a true measure of body fatness, nor is it a true measure of an individual’s overall health. Furthermore, for ages 20 years or older, body mass index incorporates height and weight, but it does not take into account age or sex.
53.6
And we know that a woman tends to have more body fat than a man with the same BMI. Likewise, an older person tends to have more body fat than a younger person with an equal BMI.
67.2
So there’s a need to consider obesity in the broader context of health. And this is where obesity stage comes in– the Edmonton Obesity Staging System. This ranks severity of obesity based on clinical assessment of problems related to weight, rather than size. It is a five-stage classification system that considers metabolic, physical, and psychological factors associated with obesity, and how these influence a patient’s overall health. At stage 0, an individual may be categorised as obese. However, they have no health concerns or risk factors for other diseases. At stage 1, an individual may present with some pre-clinical risk factors, such as blood pressure or cholesterol in the higher ranges of normal.
118.8
Stage 2 is where an individual would be considered to have health concerns with established co-morbidities, such as diabetes, high blood pressure, or osteoarthritis. Patients whose conditions progressed to the point where they develop organ damage are in stage 3, and those who progress to end-stage organ damage that is irreversible are considered to have stage 4 obesity. So essentially, the obesity staging system is considered a measure of health status of the individual, while obesity class is a measure of body size. It is important to consider obesity stage, as excessive body weight, or overweight, or obesity by body mass index doesn’t necessarily result in poor health outcomes for individuals, nor does it predict mortality or morbidity rates.
170.9
It is the obesity-related health issues that are captured in obesity stage which are much more relevant.
181.9
The advantage of the obesity staging system in predicting health outcomes is shown by a large study conducted in the United States, involving close to 8,000 individuals who were overweight or obese as defined by body mass index, and who were followed over 16 years. This graph is a survival curve showing the proportion of people still alive over time according to different levels of body mass index– so a lower proportion surviving meaning a higher mortality rate. The black line represents overweight or a BMI greater than 25, and the red, green, and blue lines represent obesity classes I, 2, and 3.
221.9
You can see that there is little difference between mortality rates or the proportion of people surviving over time in people with different degrees of overweight and obesity defined by body mass index. In fact, at 200 months, the proportion of people surviving is actually higher in those with class 3 obesity than in those who are overweight. However, when this same cohort was categorised according to obesity stage, you can see that this categorization was a much better predictor or discriminator of mortality rates than when categorised by body mass index. By 200 months, the proportion of people surviving in stage 3 was much lower than the proportion who were in stage 0.
269.9
So it appears that obesity stage is much more relevant for mortality than obesity class, or looking solely at someone’s body mass index.
282.8
So the Edmonton Obesity Staging System considers medical, mental, and functional impairments associated with obesity when considering the profile of an individual, and considers these to vary through five stages. And you can imagine that the amount of body weight or an individual’s body size will vary between individuals in the same stage, as it’s not necessarily body weight that’s relevant in obesity stages, but the effect of that weight on the body systems and the individual.
316.8
With relevance for knee osteoarthritis, in a Canadian study of over 5,500 patients who are classed as obese by body mass index and categorised by obesity stage, end-stage knee osteoarthritis, as shown by total joint replacement, was the third most prevalent obesity-related comorbidity in individuals with stage 1 to stage 3 obesity, behind hypertension and pre-hypertension.
348.7
So the Edmonton Obesity Staging System Staging Tool is useful clinically to help place individuals into one of the stages, and then this can help direct management.
363.9
In summary, the Edmonton Obesity Staging System considers medical, mental, and functional impacts of obesity on the individual. The severity or the stage of obesity is considered based on a clinical assessment of the weight-related health problems of an individual, and it’s a better indicator of mortality and morbidity than body mass index. And it’s relevant for how we may manage patients.
393
Here is a list of some of the references used in this talk.

It is essential to recognise that anthropometric classifications provide an indication of OBESITY CLASS, that is the size of the patient. However excessive body weight or body mass index does not necessarily determine poor health outcomes for individuals or directly explain mortality or morbidity rates.3 A more clinically relevant measure is OBESITY STAGE which is a measure of how healthy an individual may be.

The EOSS is a five-stage classification system that considers metabolic, physical, and psychological factors associated with obesity and how these influence the patient, their overall health, and treatment options.4 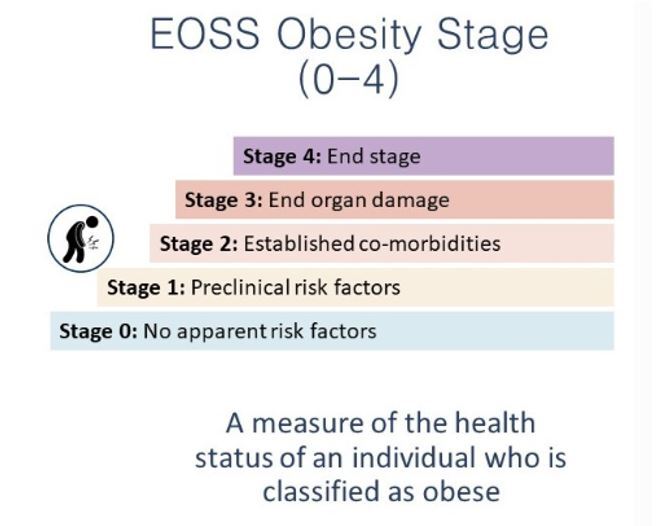