How to Power a Satellite

In this article Dr Tim Jackson explains how you power a satellite. 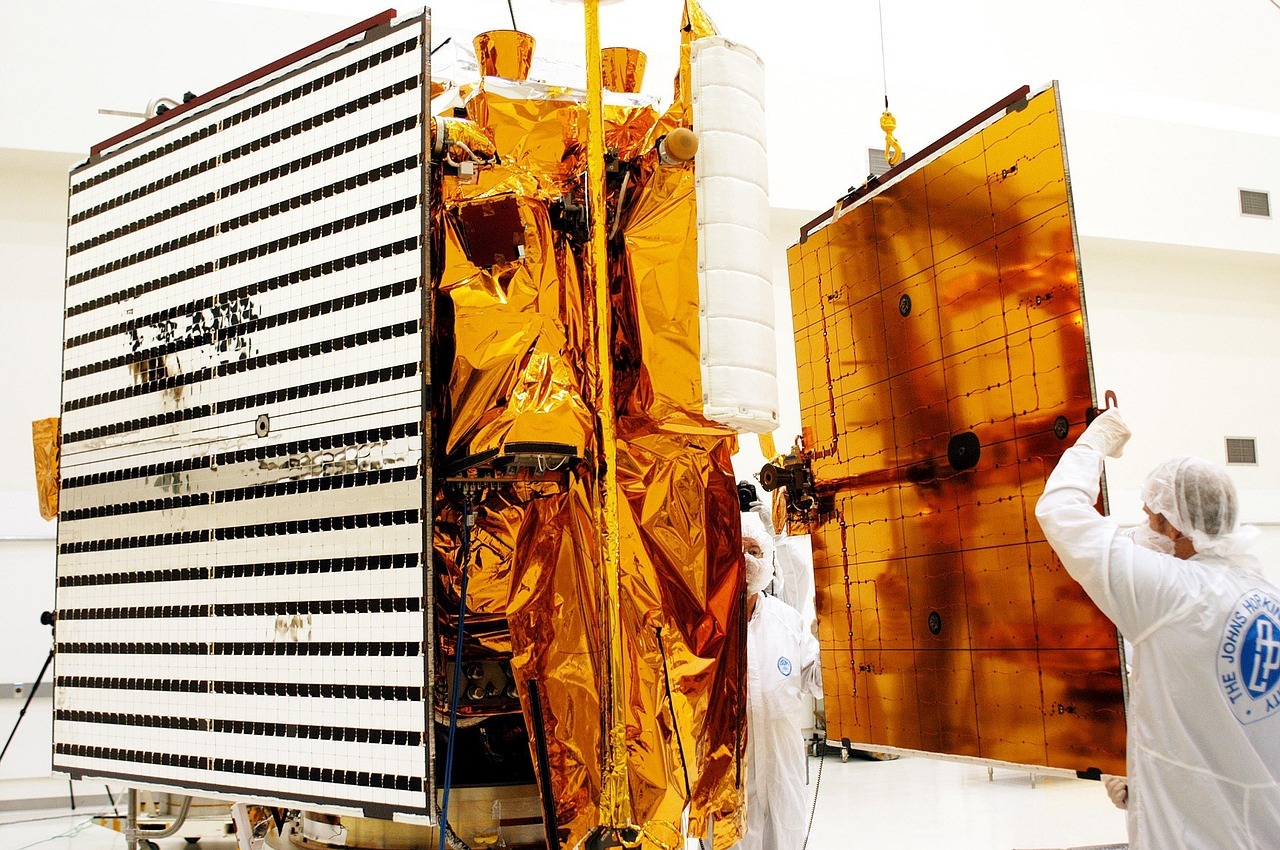 Before we consider the work undertaken by the SERENE group at the University of Birmingham, we’ll look at a much larger-scale spacecraft, China’s Tiangong 2 Space Laboratory.

Tiangong 2 was built in Beijing Space City and launched on 15th September, 2015 from the Jiuguan Satellite Launch Centre aboard a Long March 2 rocket [1].

The solar panels were folded up for launch and then deployed once the spacecraft was in orbit. We’ll see some examples of unfolding electrical devices in space in a later activity. Two wings extend from either side of the spacecraft [2]. Each wing is comprised of four solar panels made up of gallium-arsenide solar cells. Each wing has an area of around 30 m2, so the total area of the solar generating panels is equivalent to about two thirds of the goal area on a soccer pitch. The panels can be tilted to present the maximum possible area to the sun. The power generated by a solar panel is directly proportional to the intensity of sunlight falling on it, so it makes sense to maximise that area by tilting the panels to be as close as possible to perpendicular to the sun. The panels can generate up to 6 kW of DC power when fully illuminated. Power is generated at 100 V and then stepped-down to 28 V and 12 V with DC-DC converters to power the various sub-systems and equipment within the laboratory.

Over the course of one orbit, the average power generated a little less than half of the maximum value, around 2.5 kW. The spacecraft must spend some part of its orbit in the Earth’s shadow, and for that time there will be no solar generation. So a considerable proportion of the generated electricity must be stored in batteries. These batteries are 40 Amp-hour nickel-metal hydride units.

The solar irradiation density outside the Earth’s atmosphere is around 1.36 kW m-2. The 60 m2 of solar panels aboard Tiangong-2 convert less than 1/10th of that into electrical power. That’s for two reasons. The first is that the generation of electricity in solar panels is performed by electromagnetic radiation over only a small range of wavelengths. The second is that the generation processes within the panels have an efficiency of around 15%. That sounds low but it is limited by the physical mechanisms at work and the construction and circuity associated with the panels. Much research time worldwide is spent on how to make more efficient solar cells. The most sophisticated (for “sophisticated” read “expensive”, “rare”, “lab-based”) solar cells have efficiencies in the range 40-50%, commercially viable solar cells operate in the range of 10-20 % efficiency.

Some of the solar radiation is in the form of heat (infra-red wavelengths), and so one of the non-electrical challenges for the designers of spacecraft is how to insulate them from that heat. Conversely, when the spacecraft is in the Earth’s shadow, the designers have got to keep the heat in!

We can make some estimates about the batteries aboard Tiangong-2. The typical power storage density of a nickel-metal hydride battery is 50 Wh/Kg. Let’s guess that we want to store 50% of the generated electricity in the batteries. On average, the panels give us 2.5×24 = 60 kW-hours a day, so to have a half day’s supply of electricity we need to store 30 kW-hours. We therefore need 600 Kg of batteries to have just 12 hours safety margin for the electricity supply. The launch weight of Tiangong-2 can’t have been above 8,500 Kg because it is limited by the launch rocket. Therefore something like 10 % of the weight of the spacecraft was probably taken up by batteries.

Alongside the main Tiangong-2 spacecraft is a micro satellite called the Banxing-2 (BX-2), which was designed and developed at the Shanghai Academy of Spaceflight Technology. This is close in size to the pocket-cube satellites which we want to consider in our next article. The purpose of BX-2 is to take photographs of Tiangong-2. This microsatellite is a cube with a side length of 40 centimeters. It is equipped with three gallium arsenide solar panels attached to its sides. These have to power a control system for the propulsion systems to keep flying close to, and at a suitable angle to, the main spacecraft, for the communications systems and for the onboard cameras. Like Tiangong-2, BX-2 must have onboard batteries and a power management control system.

Let’s think about what 2.5 kW of generated power actually means. A desk top computer back at mission control might consume 250 W of power, that’s one tenth of the average power generated in one orbit. The designers of the power systems on spacecraft have to think very carefully about the power budget. It really is a question of power – the power figure tells us the rate at which energy is being supplied. At 100 V supply, the rate at which charge is moving through the circuits – in other words, the electric current – is 25 A. If we try to draw too much power, or too much current, then the voltage drops. Stepping the voltage down to lower levels is both safe, and it gives us more current to do work with, but the power available remains the same (actually, slightly less because no converter is 100 % efficient). And 2.5 kW is not a lot of power to work with. In step 2.10 (Power Budgets) we’ll ask you to make a power “budget” for your daily activities and you can get an idea of just what can be done with 2.5 kW.

How does a solar panel work?

The solar panels themselves need some control circuitry. The “operating characteristic” of a typical commercial solar cell is shown in the diagram below. The cell acts like a current source – it will deliver a fixed current under a defined solar irradiance (the xxx W m-2 figures shown) up to a threshold voltage, above which the current falls. You could use the curves in this plot to develop graphs of output electrical power against voltage. You will see that there is a particular voltage at which the output power is a maximum for each of the irradiance curves. This maximum power is limited by the rate of energy supply from the sun and the efficiency of the solar cell. The voltage at which the maximum power is delivered is dependent upon the irradiance. (It is, in fact, also dependent on the temperature of the panel but we’ll ignore this for now). 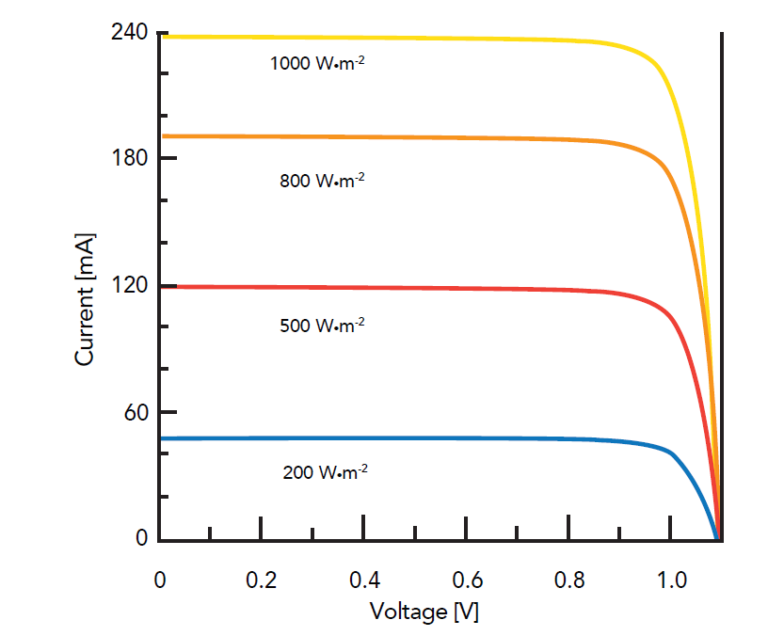 The electrical power engineers in a satellite design team could design a circuit which can extract the maximum power from the solar panels. They would have to “track” the power delivered and have a control system in their electronics to adjust the operating voltage of the panel to suit the solar irradiance. They have to have sensors to determine the angle of the panel to the sun’s radiation and motors in a feedback-controlled system to adjust the angle of the panels to maximise the solar irradiance. Or, they may decide that the complexity and weight of such a system is too great for the constraints of their system, and fix some parameters at values which deliver enough power to meet the power budget of the system. Compromise is an important part of Engineering, so long as the success of the mission is achieved.

We finish this article then with a reflection. The root of the word “Engineering” lies in ingenuity, in cunning, in cleverness, in having the skill or talent to devise a means of achieving a desired outcome. Providing power in space, requires ingenuity.