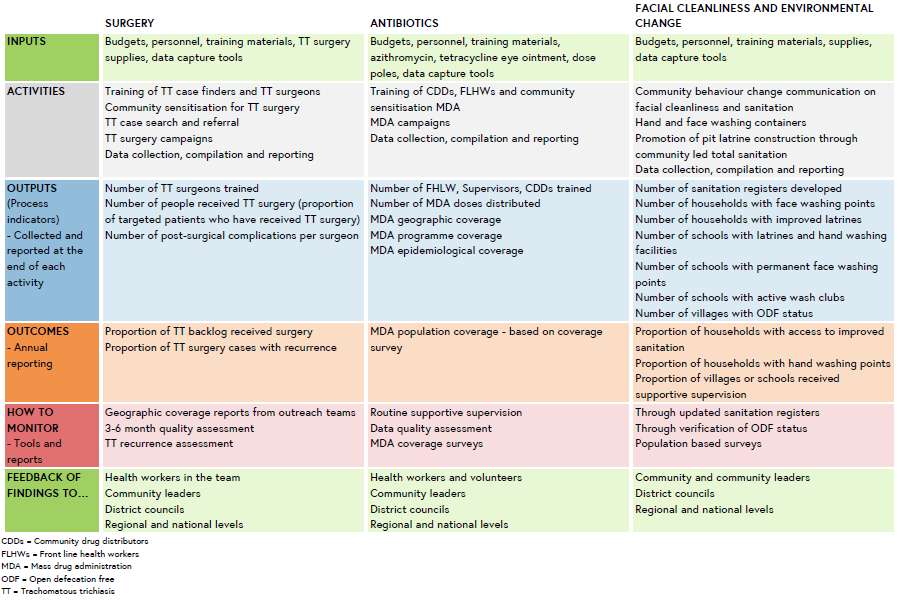 Baseline surveys must be undertaken before any SAFE interventions are started. Population-based surveys should be undertaken using methods recommended by the World Health Organization (WHO).

Guidance on survey design is given in the WHO document, Design parameters for population-based trachoma prevalence surveys.

Detailed guidance on how to plan the implementation of SAFE is given in the Trachoma Action Planning guide.

The key indicators which determine whether trachoma is a public health problem are prevalence of TF of ≥ 5% in children aged 1 – 9 and prevalence of TT of ≥ 0.2% in people aged 15 years and above.

Impact survey and pre-validation surveillance survey sample sizes are based on the expected TF prevalence, although data on trachomatous trichiasis (TT) are also collected.

Impact surveys are conducted 6 – 12 months after the final planned round of mass drug administration (MDA). In other words, they should be done:

Impact surveys are carried out to determine if:

Once the prevalence of TF has reached the elimination threshold, MDA is stopped. TT surgery would continue to manage all remaining TT cases and new cases. F&E interventions should also be continued, since access to water and sanitation is a human right.

When the prevalence of TT has reached the elimination threshold, the programme can transition from detecting and managing TT in an active manner, to providing services for TT surgery as part of routine eye care.

Surveillance surveys use ongoing data collection and methods interpretation which guides key decisions. These surveys can be:

Pre-validation surveillance surveys for trachoma are carried out at least 24 months after the last impact survey has shown a TF prevalence < 5% in children aged 1 – 9 years. These surveys are done to determine whether reductions in TF prevalence have been sustained in the absence of antibiotic MDA.

If a pre-validation surveillance survey shows that the elimination threshold for TF has been maintained, and data from any of the WHO-recommended methods for TT prevalence estimation have demonstrated that TT prevalence is < 0.2% in adults aged 15 years and above, then trachoma can be considered to have been eliminated as a public health problem from the EU. The remaining cases of TT (and future incident cases) are then managed as part of normal eye care services and not a stand-alone, campaign-style TT programme.

When all endemic EUs have achieved elimination thresholds for TF and TT, the country is eligible for to request validation of elimination of trachoma as a public health problem.

Recently, antibody-based assays have shown promising results as potential additional tools for evaluating the transmission of ocular Chlamydia trachomatis infection at population level. This alternative indicator to the use of clinical signs of active trachoma for evaluating transmission intensity within a community may be useful where elimination of trachoma as a public health problem has been achieved.

Ghana became the first sub-Saharan African country to be validated for elimination of trachoma as a public health problem. This paper shares some insights into the process of surveillance that was undertaken: Operational adaptations of the trachoma pre-validation surveillance strategy employed in Ghana: a qualitative assessment of successes and challenges.