Case study: Did SAFE make a difference in Morocco?

In this article we look at the data used to measure progress towards elimination of trachoma as a public health problem in the Kingdom of Morocco. 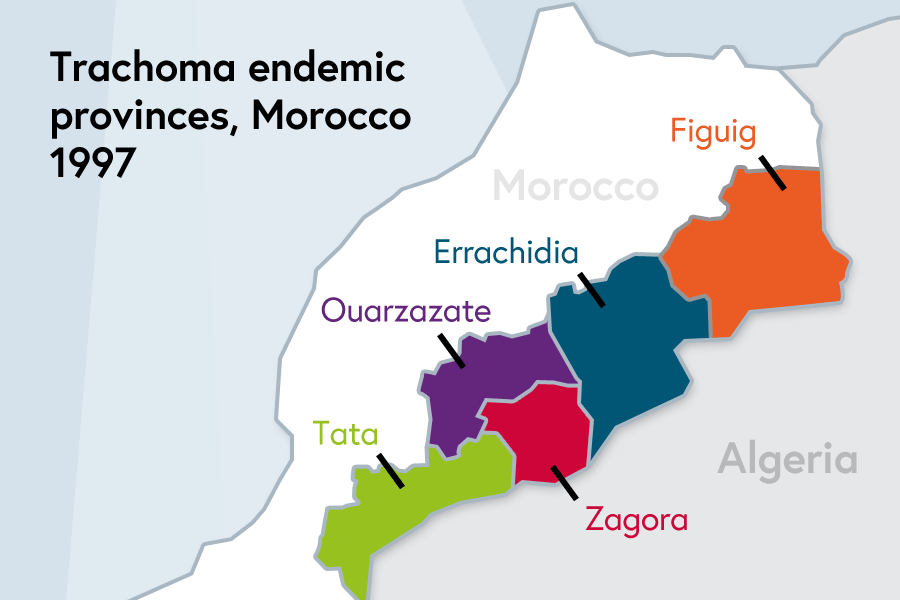 The SAFE implementation programme in Morocco set clear goals known as Ultimate Intervention Goals (UIGs) that needed to be achieved by 2005.

A – The antibiotic target was set at a minimum 80% coverage with a goal of achieving a prevalence of trachomatous inflammation — follicular (TF) <5% in children aged 1–9 years. Aspects evaluated were: personnel training, and the coverage and acceptance of antibiotics.

F&E – Physical actions to improve individual and collective hygiene were also undertaken, including:

Impact surveys were carried out every two years between 1997 and 2003. The data from each survey were essential for navigating the programme towards its UIGs. The survey participation rate was over 90% in each of the provinces. 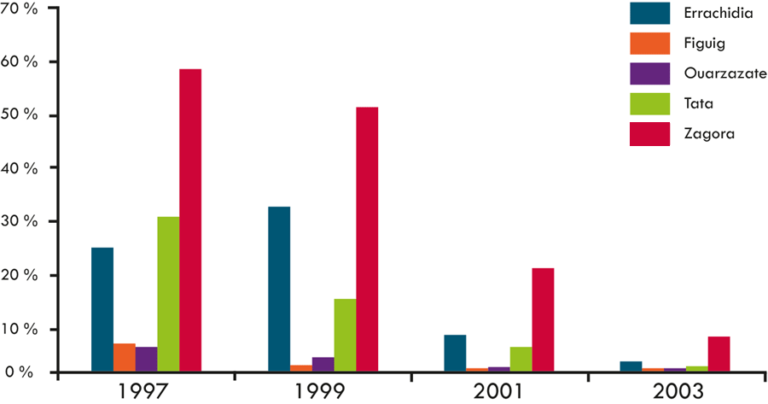 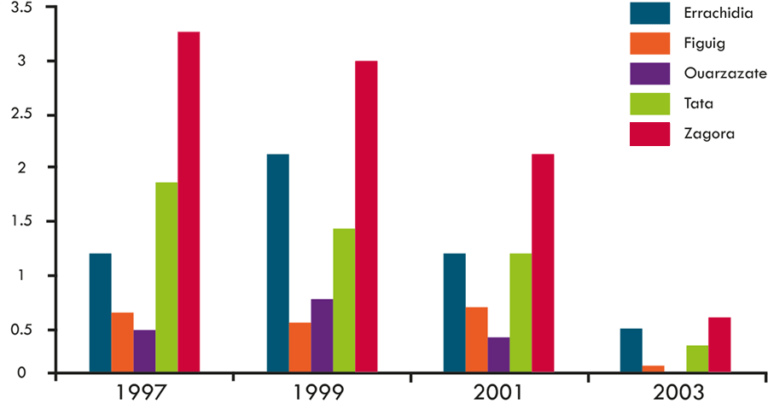 Recommendations from the 2003 impact survey

The impact surveys showed declining prevalence of both TF and TT in all 5 endemic provinces between 1997–2003. This occurred as the SAFE strategy was being implemented in these provinces.

Although the prevalence of trachomatous inflammation — follicular (TF) in 1–9 year olds did not exceed 2% in four of the provinces, it remained higher than 5% in Zagora province (7.8%).

It was decided that specific actions would be taken regarding TT surgery, targeting the district communities where the burden of TT remained high.

In the Agdez district of Zagora province antibiotic MDA was extended by one more year and a repeat impact survey was carried out .

How was a surveillance system established?

The Kingdom of Morocco set up an epidemiological surveillance system for trachoma in 2006, in collaboration with the World Health Organization (WHO). This system is embedded in the existing structures of the national health care system.

The system used sentinel villages in the 5 endemic provinces to monitor the trends in TF and TT. This enables generation of data for decision-making, with actions to be taken locally.

This was an essential step in enabling the country to apply for validation of elimination of trachoma as a public health problem.

Surveillance for trichiasis was based on ‘comprehensive detection of all cases of TT’. Screening was conducted annually in all communities of the 5 target provinces. Health personnel went door-to-door and identified people with TT.

Findings from the pre-validation surveillance survey

In 2009, pre-validation surveys were conducted in the most disadvantaged communities in the 5 endemic provinces.

The objective was to demonstrate that trachoma no longer represented a public health problem in the most disadvantaged communities in the target provinces.

Figure. Trachoma surveillance surveys, Morocco 2009: Prevalence of TF found to be < 5% in all areas

How was completion of the dossier and validation carried out?

Following completion of the pre-validation surveys, discussions were held with the WHO to begin to prepare the application for validation of elimination of trachoma as a public health problem. When the validation dossier template was completed the WHO convened an ad-hoc dossier review group to assess it and produce a recommendation to the WHO.

SAFE and the impact on poverty

The trachoma programme has had far reaching impact on the targeted communities in Morocco. Improved standards of living and reductions in social inequalities have contributed to significant reduced poverty and vulnerability. Extreme poverty has been almost eradicated.