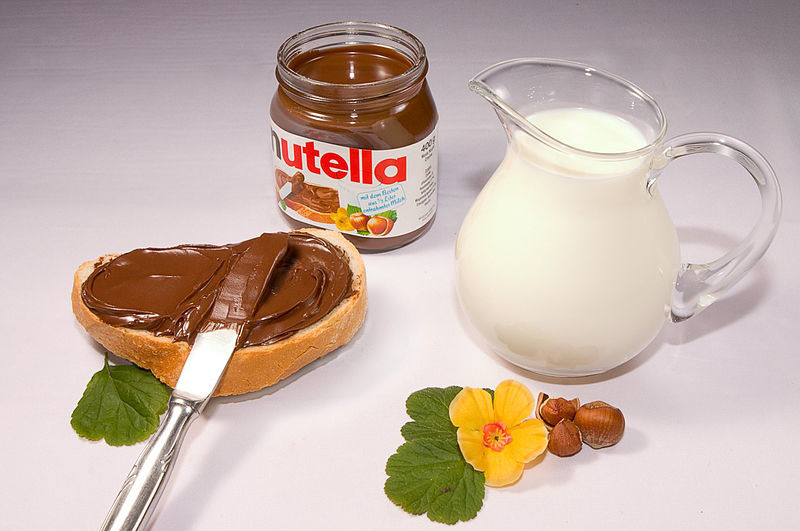 Nutella is made by Italian company, Ferrero. It is a delicious ‘chocolate’ spread made of sugar, milk, cocoa, hazelnuts, lecithin (soy), vanillin (an artificial flavour) and palm oil, which is where the controversy about this product begins.

Palm oil is used because it gives Nutella its creamy, smooth texture and is said to heighten the flavour of its ingredients. By using palm oil the hydrogenation process that would produce unhealthy trans fats is avoided. And it lengthens the shelf life of the product because it has a high stability to oxidation. So palm oil is a key ingredient in this top-selling product with a worldwide market. It is said that a jar of Nutella is sold every 2.5 seconds around the world, helping to make the chocolatier company, Ferrero SpA extremely profitable.

But how ‘sustainable’ is the palm oil used in Nutella? Ferrero claims that it is ‘100% certified segregated RSPO’ (see Step 2.8), which means that all the palm oil used in Nutella is kept separated from other, non-certified palm oil, throughout the entire supply chain. In November 2013, the company further strengthened its commitment to responsibly sourcing palm oil through the Ferrero Palm Oil Charter, in order to guarantee that the palm fruit oil used in Nutella does not contribute to deforestation, species extinction, high greenhouse gas emissions or human rights violations. According to Ferrero, its Palm Oil Charter addresses the leading causes of deforestation and creates the optimal balance between the conservation of the environment, community needs and economic benefit and viability.

They are committed to making sure that their palm oil suppliers are:

In November 2015 Ferrero became a member of POIG Palm Oil Innovation Group, which, as you saw in the previous Step, is an initiative to reform the palm oil industry, building upon the RSPO standards and commitments.

The company’s actions to tackle deforestation in an accountable way have been supported by Greenpeace, who considers Ferrero one of the first and more progressive companies in the world in the implementation of a relevant ‘No Deforestation’ policy.

Why should Ferrero be so assiduous in addressing these challenges? Firstly, they are consumer-facing, they sell large volumes of their product at relatively low margins into supermarket chains and other retailers, so maintaining worldwide volumes are critical to profitability. Because their chocolate hazelnut spread is a ‘luxury’ item, not a food necessity, they are vulnerable to shifts in consumer preferences. It means they need to stay ahead of the game when it comes to potential boycotts of their product because of environmental or human rights violations, whether perceived or real. When palm oil gets bad press, they want to be able to differentiate their practice from that of the rest of the industry. Finally, because of their dominance in the markets for premium palm oil they are among a small group of palm oil users that can cajole and pressure their supply chains to adhere to the highest standards. Other users of palm oil that are not under this level of public scrutiny have fewer incentives to become more responsible to the same extent and over realistic time periods.

Opponents argue that despite current practices, the plantations Ferrero buys from have replaced tropical rain forest and rare species habitats in the past, even if they aren’t expanding into it currently. It’s a complicated situation because Ferrero’s commitments don’t change the expanding impact of the palm oil sector as a whole.