The building blocks of written language

There are different levels of structure within written language. A good way to remember these is through the diagram below. 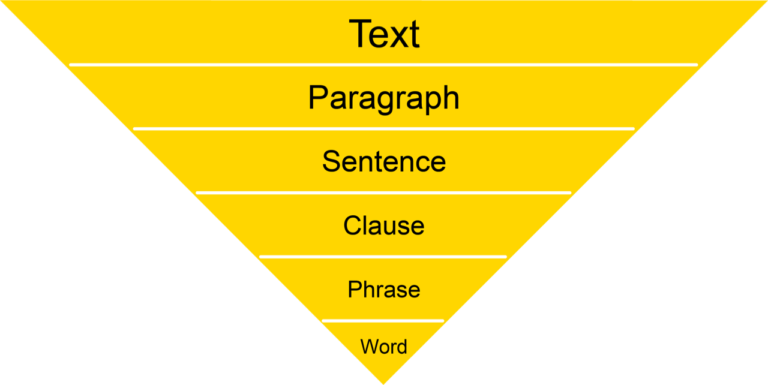 A text is a complete piece of writing. A text can be very short, such as a “No Parking” sign, or much longer, such as an essay, a chapter from a book, or even a whole book.

In academic writing, most texts are divided into paragraphs. There are no “rules” which determine how many paragraphs you should have in a text, or where one paragraph should end and another begins. Decisions about where to end a paragraph and start a new one will depend on the writer’s perception of how ideas in different sentences are related to one another, of when you are moving from one point to a new one. In the main body of an essay in academic writing, we advise you to have one main idea for each paragraph.

Sentences start with a capital letter and end with a full stop. Some sentences are short, and others are long and complicated, for example;

In most academic writing each sentence must include at least one subject and a verb. In the examples above the subjects are highlighted in yellow, and the verbs in blue.

“In Europe food waste is considered a major nutritional and environmental problem.”

“Although food waste at the retail stage may be considered small in comparison with the amount of food waste overall,
“it is still a big issue”
“which can lead to significant economic loss as well as environmental and social problems.”

Clauses can be joined to one another by conjunctions (eg and, but, although) or by relative pronouns (eg who, which, that).

Phrases are groups of words which go together. Here are some examples from the sentences above.

There are other types of phrases, too.

Notice that each phrase includes several parts of speech, so that in each phrase you need to look for the key word, for example;

“a major nutritional and environmental problem“

In addition, you also need to look at the function of the phrase. So, “on the other hand” and “in contrast” function as adverbs (like “however”), even though there is no adverb in the phrase.

You know what a word is!