Glossary of terms related to epilepsy and the neuropsychology of the disease. 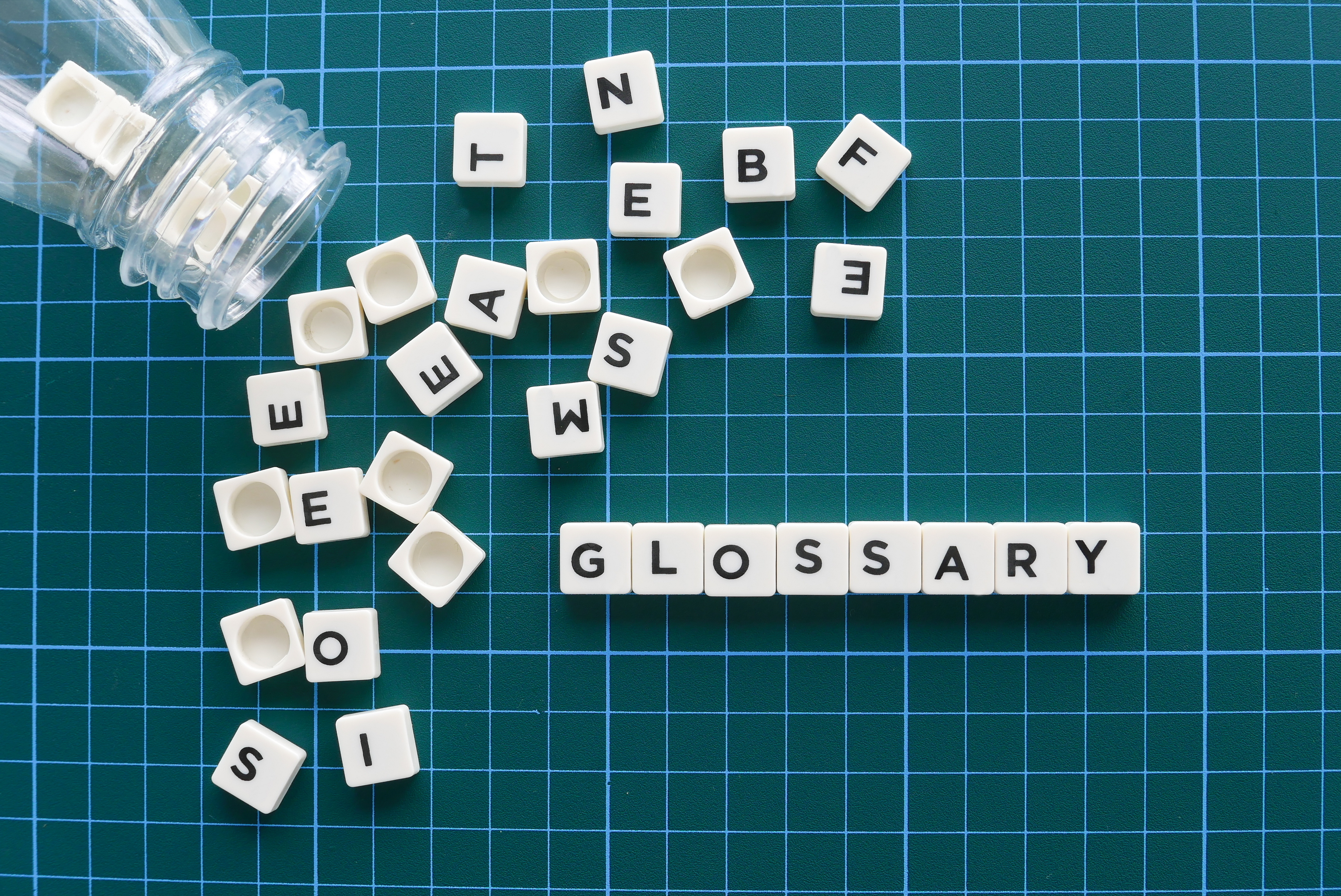 Aetiology: the study of the causes and origins of, or reasons behind the way that things are or the way they function. The word is commonly used in medicine (referring to the causes of a disease), but also in other disciplines.

Aura: the initial component of a seizure occurring prior to alteration or loss of consciousness. It anticipates the seizure. There are different kinds of auras, characterized by specific symptoms according to the area of the brain involved. For example, people who are on the point of having a seizure can experience sensitive auras, such as intensified olfactory sensations, or psychic auras, such as hallucinations.

Barbiturate: a drug that acts as a depressant on the central nervous system. It has a variety of effects (from mild sedation to death). Barbiturates are effective as anxiolytic, hypnotic, and anticonvulsant, but, among other possible adverse effects, have physical and psychological addiction potential as well as overdose potential. In routine medical practice they have been replaced by benzodiazepines and nonbenzodiazepines particularly in the treatment of anxiety and insomnia, due to lower risk of addiction and overdose and lack of an antidote for barbiturate overdose. Barbiturates are still in use for various purposes: in general anesthesia, epilepsy, treatment of acute migraines or cluster headaches, euthanasia, capital punishment, and assisted suicide.

Brain tumour: a mass of abnormal cells in the brain. It is primary when it originates in the brain or secondary when it spreads in the brain from elsewhere in the body (brain metastasis tumour). Brain tumours produce different consequences according to the area of the brain involved. Usually, symptoms may involve headaches, seizures, problems with vision, vomiting, cognitive and behavioural changes.

Carotid arteries: the two major blood vessels in the neck, one on the right side and one on the left, supplying blood to the head.

Cognition: the term used to define all mental processes involved in perceiving, speaking, reasoning, learning, remembering as well as in planning and controlling motor behaviour.

Comorbidity: the co-occurrence of two or more pathological conditions in the same patient.

Depolarization: condition during which a neuron undergoes a shift in electric charge distribution, resulting in less negative charge inside the cell. Depolarization is essential to communication between neurons.

Diabetes: a disorder characterized by the excess of blood glucose in the body (hyperglycemia) due to lack of insulin or to inefficient use of it.

Electrographic findings and brain-wave recordings: the results of electroencephalography (EEG) through the use of multiple electrodes placed on the scalp in order to measure the inherent activity (brain-wave) of the underlying brain areas. Different brain waves point to different pathologies or mind states.

Epilepsy surgery: a neuro-surgical procedure consisting in resecting the epileptogenic focus (an area of the brain) to prevent further seizures. It is usually addressed to patients diagnosed with pharmaco-resistant epileptic syndromes that cannot be treated successfully with anti-epileptic drugs.

Genetics: the branch of biology that studies heredity, that is, how the characteristics of humans (and living things in general) are passed on from one generation to the next.

Gliosis: the proliferation of glial cells, including astrocytes, microglia and oligodendrocytes in response to brain damage. Usually, this process lasts several days and it has been shown to have both beneficial and detrimental effects, depending on many molecular factors which are still being studied.

Head Trauma (or traumatic brain injury): defined as an injury to the brain and the structures protecting it, the scalp and the skull. It can be either focal or diffuse and according to the area of the brain involved it is the cause of different cognitive and behavioural consequences.

Heredity: the passing on of physical and mental characteristics stored in the genes from one generation to the next.

Hippocampus: the neural structure located in the temporal lobes of the brain. It is mainly involved in memory processes, such as the storage or the retrieval of information from long-term memory.

Ictal phase: a physiologic state or event such as a seizure, stroke, or headache. The word originates from the Latin “ictus”, meaning a blow or a stroke.

Infectious diseases: conditions caused by pathogenic organisms living in our body, such as bacteria, viruses, fungi and parasites. The nervous system can be attacked by a wide range of neuroinfectious diseases, such as meningitis and viral encephalitis, causing fever, nausea, vomiting, sleepiness and decrease in appetite. Neuroinfectious diseases can also affect patient’s cognition, resulting in processing slowness and other mental problems, for example memory and language difficulties.

Interictal phase: the period between two subsequent events such as seizures or strokes.

Lateralization (of brain functions): some cognitive functions are mainly processed by neural structures on the left side of the brain, while others are manly processed by the opposite side. This confirms the existence of left-right functional differences in the brain, and thus many cognitive processes can be either left- or right-lateralized.

Mood disorder: a psychiatric disturbance, characterized by pathological symptoms in a person’s mood. There are two different categories of mood disorders: with elevated mood, such as mania and hypomania, and with depressed mood, such as major depressive disorder. If a person shows a mood cycling between mania and depression, he/she can be diagnosed with either a bipolar, dysthymic or cyclothymic disorder, according to the severity of the disease. Mood disorders can be substance-induced.

Neurodegenerative disorder: a term referring to a heterogenous group of symptoms affecting the structure and the function of the brain progressively. These diseases, such as Alzheimer’s, Parkinson’s and Huntington’s disease, are usually age-dependent and treatable, but so far have not been defeated.

Neuroimaging techniques: technologically advanced instruments used to visualize directly or indirectly either the structure or the functioning of the nervous system. They can be invasive or non-invasive, depending on whether they need the injection of chemical markers in the body in order to visualize the area/structure under investigation. Computerized Tomography (CT), Structural and functional magnetic resonance imaging (MRI and fMRI), Positron Emission Tomography (PET), Electroencephalography (EEG) and Magnetoencephalography (MEG) are examples of neuroimaging techniques.

Neuropsychology: the discipline that investigates cognitive impairments following acquired and developmental brain damages. Deficits may be single or multiple, such as aphasia, amnesia or dysexecutive syndrome.

Paroxysmal depolarizing shift (PDS): hallmark of cellular manifestation of epilepsy. Little is known about the beginning, propagation and termination of PDS.

Postictal phase: the state immediately following an event such as a seizure or a stroke. In this period of time the patient gradually awakens, but may still be confused

Precipitating factors: factors associated with the onset of a disease, illness, accident, behavioral response, or course of action. Usually factors have a different degree of importance and one or more can be “necessary” for the diagnosis of a disease.

Prognosis: (in medicine) prediction of the course and outcome of a disease, based on a careful diagnosis.

Quality of life: multidimensional concept that defines emotional, cognitive, physical, and social well-being. The standard level of quality of life is constantly updated and reflects the values, goals and socio-cultural context in which an individual lives.

Sensitivity (of cognitive tests): the propriety of a test to correctly identify people with a disease being investigated. It is also called true positive rate.

Signs: objective evidence of a disease, which can be observed and detected by consultants.

Status Epilepticus (SE): a medical emergency associated with significant morbidity and mortality. SE is defined as a continuous seizure lasting more than 5 min, or two or more seizures without full recovery of consciousness between them.

Sudden unexpected death in epilepsy (SUDEP): the most common cause of dying from a seizure. It usually occurs during sleep. So far not much is known about it. The risk of SUDEP can be reduced by keeping seizures under control.

Symptoms: the effects of a disease subjectively experienced and reported by the patient.

Tonic-clonic seizure: a seizure characterized by successive phases of stiffening (tonic) and rhythmical (clonic) jerking of the limbs.

Visuo-spatial ability: the capacity to perceive and manipulate in different ways information on visual stimuli, such as colour, shape, size, orientation and spatial relations among them.