Why are coral reefs important?

some text here
© University of Southampton

Coral reefs are among the most fascinating ecosystems of the world. Not only are they stunningly beautiful, they also represent a tremendous economic asset. Estimates suggest that coral reefs provide close to US$30bn each year in goods and services (source World Wide Fund for Nature WWF). In this step, Professor Joerg Wiedenmann and Dr Cecilia D’Angelo explain the benefits that coral reefs provide to human societies and why reefs should be protected.

In the previous step, you learned how reefs are home to ~25 % of all marine biodiversity. Many of these species are key to the services delivered by coral reefs. For example, reefs form the nurseries for many of the ocean’s fish; an estimated one billion people have some dependence on coral reefs for food and income from fishing. If sustainably managed, reefs can yield up to 15 tonnes of fish and other seafood per square kilometre each year. 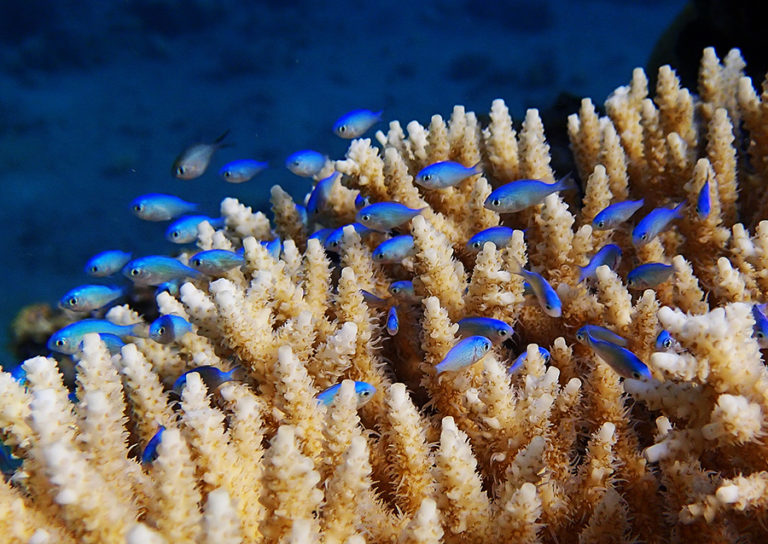 Reefs break down the power of waves during storms. By helping to prevent coastal erosion, flooding, and loss of property on the shore, the reefs save billions of dollars each year in terms of reduced insurance and reconstruction costs and reduced need to build costly coastal defences – not to mention the reduced human cost of destruction and displacement. 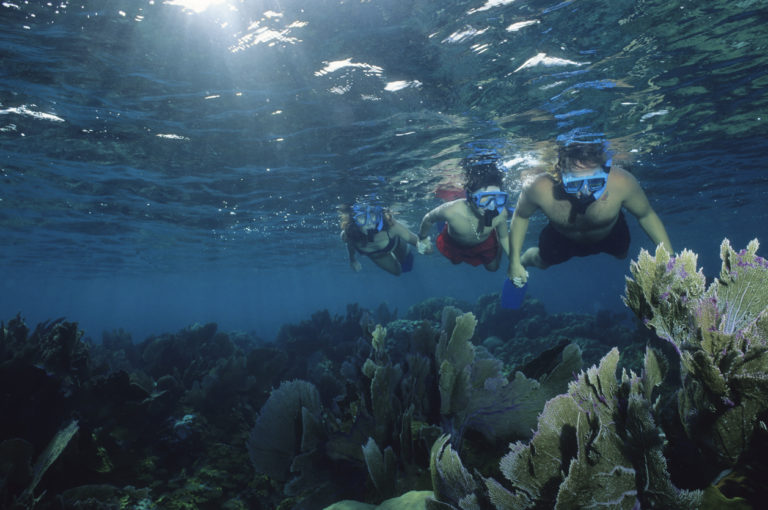 Reef organisms represent a source for potential drugs, biotechnological tools and biomimetic designs. Already today, bioactive compounds from coral reef organisms are being used for medical purposes. For example, a compound from a poisonous cone snail serves as extraordinarily strong painkiller. Other chemicals are tested for cancer treatments. Again, the great biodiversity of coral reefs is the reason why these habitats are so rich in bioactive compounds: Many different species need to feed, find their mates, and defend themselves and the niche in which they do best within the crammed reef habitats. Many of these interactions involve “chemical warfare”. The above-mentioned cone snails use their potent toxins to hunt down fish by paralysing them with a poisonous dart! 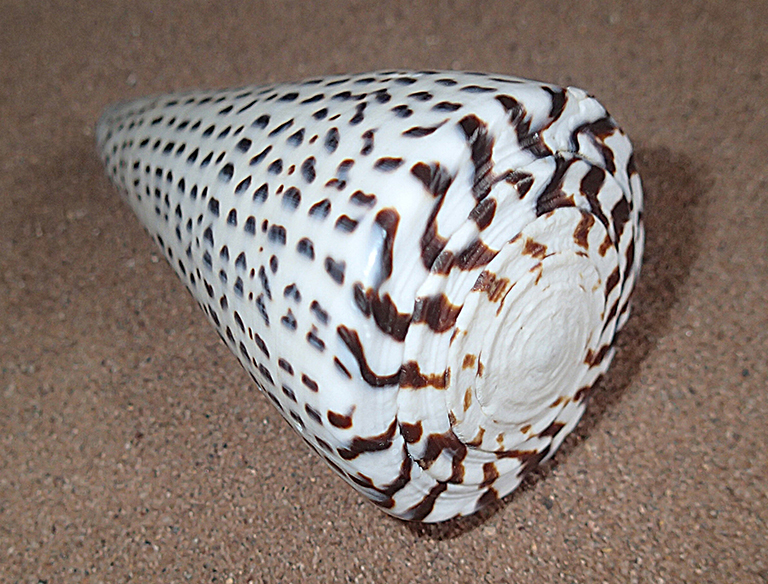 Many of the pigments that lend some of the striking colours to the corals light up in green and red colours when they are illuminated with ultraviolet of blue light. This process is called fluorescence. Fluorescence is a powerful tool to visualise things as the fluorescent objects stand out from the background in the dark. For instance, one can easily spot and count new coral recruits on reefs. Also, fluorescence can be used to detect how much live tissue is still covering a coral skeleton. Finally, changes in the fluorescence patterns can indicate the presence of parasites in a coral or areas of mechanical stress. 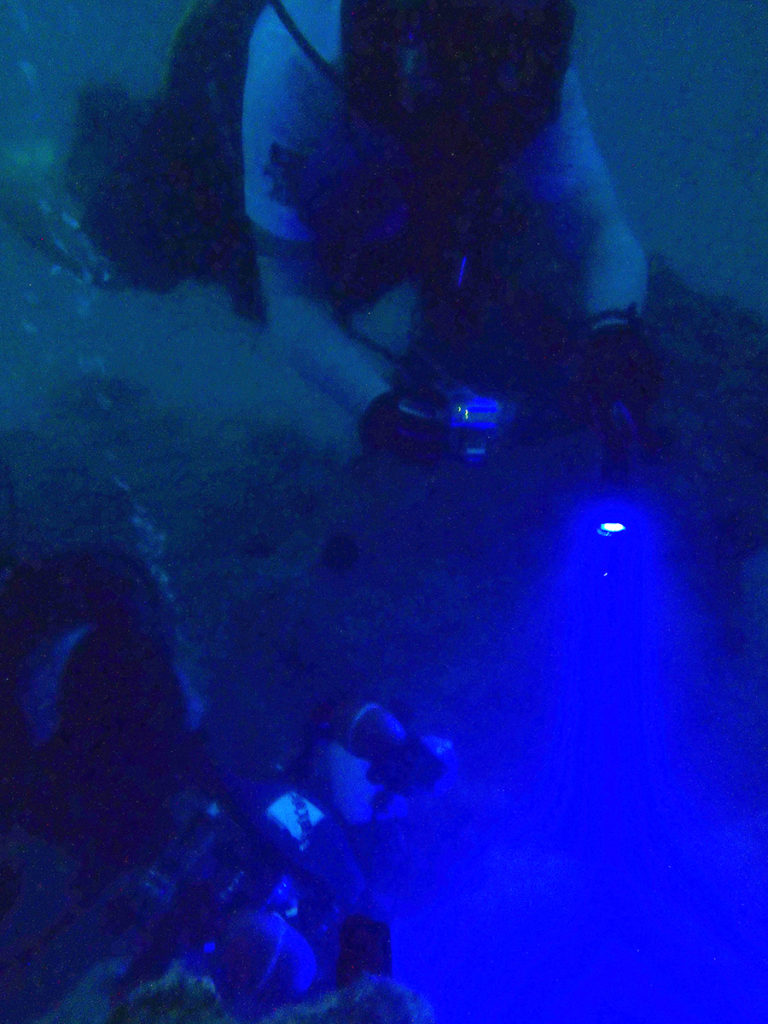 Divers exploring coral fluorescence with the help of a blue torch at dusk in the Persian / Arabian Gulf off the coast of Abu Dhabi. Photo by J. Wiedenmann & C. D’Angelo © University of Southampton 2019. 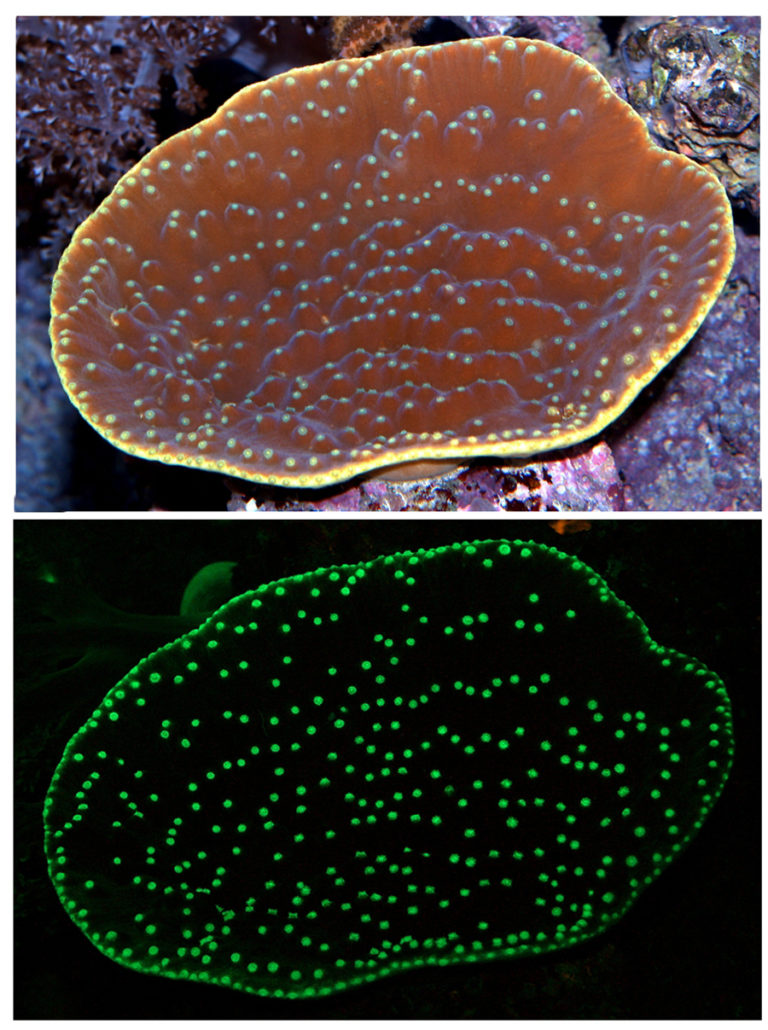 Green fluorescent pigments can be found in the polyps and the growth margin of the coral Turbinaria sp. The upper image shows the coral colony as seen under daylight. The lower picture shows the green fluorescence of the coral induced by illuminating the coral with blue light and photographing it through a yellow filter that blocks out the excitation light and lets only the light emitted by the coral pigments pass. Photo by J. Wiedenmann & C. D’Angelo © University of Southampton 2019.

Fluorescence can not only be used by divers for reef monitoring purposes, but also in the laboratory to study cells under the microscope. The colourful pigments are in fact proteins and they can be used in biomedical research to monitor the molecular workings of living cells and organisms and teach us how diseases work. We have discovered and isolated the fluorescent protein “EosFP” from a brain coral which can change its colour from green to red. 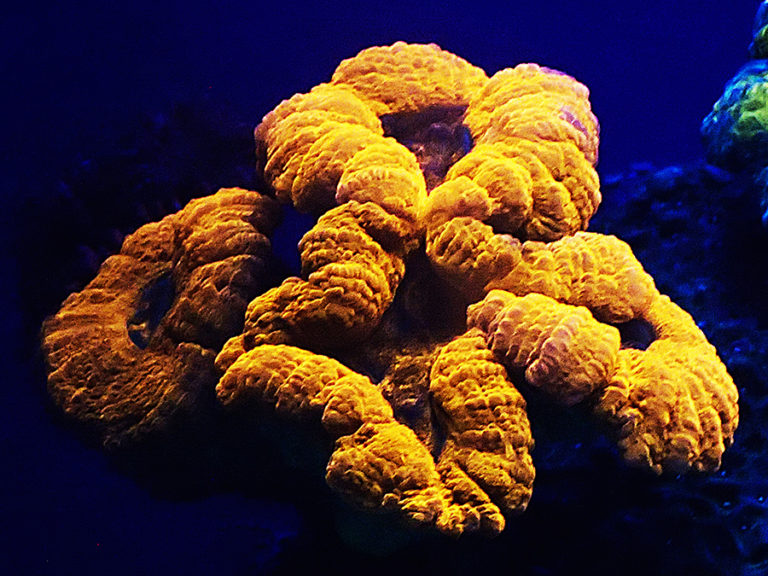 The brain coral Lobophyllia hemprichii shows orange fluorescence when it is illuminated with blue light due the presence of the protein “EosFP. The colour-changing pigment improves the internal light climate in the coral for the benefit of the symbionts in deeper water (see Coral Reefs Step 1 for more information on pigment function). Photo by J. Wiedenmann & C. D’Angelo © University of Southampton 2019.

This protein has subsequently helped the Scientist Eric Betzig to develop a novel microscopy technique that enables to study cells with super-resolution. An invention for which he was awarded the Nobel Prize in Chemistry in 2015.

Research from the University of Southampton featured at the Royal Society Summer Exhibition in 2017; you can learn more about the use of fluorescent coral pigments and our research in the video below: