The open ocean: a world on the move

As land-living animals, we are used to seeing habitats shaped and defined by fixed geographic features like hills, valleys, lakes and rivers. We also recognise changing seasons by looking at atmospheric weather and plants. By contrast, to our eyes, the open ocean can look uniform, constant and even boring. But animals living in the open ocean experience a changing and variable environment where physical conditions and habitats are shaped more by fluid dynamics than fixed geographic features.

Because habitats and environments in the open ocean are not fixed in one place, the lives of many oceanic animals are characterised by movement. The longest migration on Earth is conducted by an oceanic seabird (the Arctic tern, migrating over 90,000km between Arctic and Antarctic waters), and the largest migration by volume of animals also occurs every day in oceanic waters.

Terrestrial animals wanting to migrate may face barriers to movement such as mountain chains or seas, but in the open ocean movement and dispersal is generally easier, particularly when assisted by ocean currents. Ocean fronts, places where waters of different temperatures meet, or upwelling areas where cold, nutrient rich waters are brought to the surface create transient patches of productivity – oases in a wider desert. Mobile marine animals in the open ocean navigate between these regions of high productivity.

Animals living in the open ocean are therefore often highly mobile or migratory, travelling large distances to find patches of the ocean where food is more common. The life cycles, body forms and physiologies of these highly mobile animals are all shaped by the need to move. Ecological interactions among animals living the open ocean are also shaped by life on the move.

Streamlined body shapes with large, stiffened tails (increasing the efficiency of swimming) are common in oceanic fishes. Members of the tuna and mackerel family in particular, and many oceanic sharks show such adaptations. Large fishes generally swim with greater efficiency than smaller fishes, but large size comes with an increased need for food and oxygen. There are many ways of balancing swimming efficiency with energetic, oxygen and nutrient demands, resulting in diversity in body sizes within oceanic fishes. 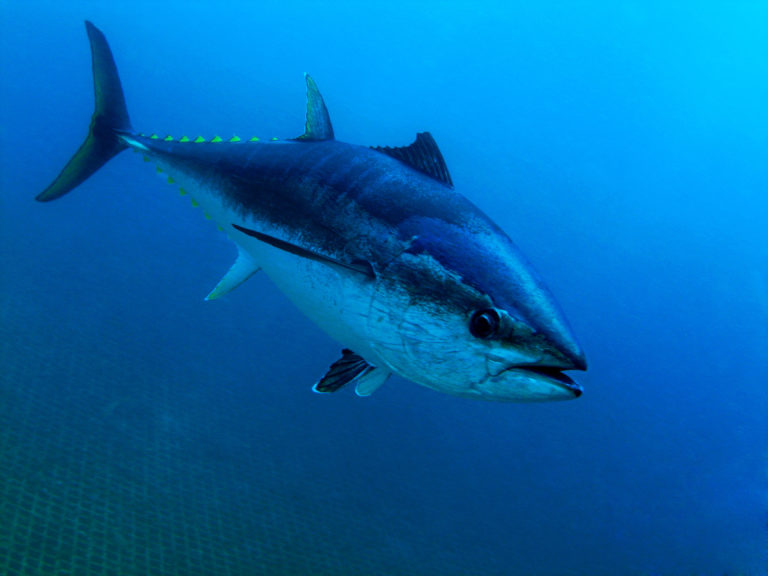 The body of a tuna is very well adapted for life on the move. © Whitepointer, iStock, 2019.

Types of migration in oceanic animals

In common language we often think of migration as seasonal or large-scale movements of animals between habitats. A familiar example is the seasonal movements of songbirds between warmer regions in winter and cooler areas in summer. But ecologically speaking, migration is defined as:

Directed and sustained movement of an individual typically at the expense of behaviours such as foraging that would otherwise keep the animal in a local area.

This more careful definition recognises that migration can happen in a large number of ways, and that migration occurs at the level of the individual. It is therefore a feature that is under biological selection, and can lead to evolutionary adaptations. There are several types of migration commonly seen in oceanic fishes.

This occurs when the habitat requirements of different life stages vary considerably so that individuals must move between habitats. Unlike marine mammals, all bony fish develop from eggs and may grow over several orders of magnitude in size. Larval fish have very different diets, habitat requirements and predators than adults, and fishes very commonly migrate between juvenile habitats and adult feeding grounds. In particular larval fish need abundant food resources in order to grow rapidly and limit their risk of being eaten. Oceanic fishes commonly spawn in regions of high productivity, and may time spawning to coincide with seasonal upwellings. Fisheries frequently develop around these predictable spawning grounds. As the larval fish grow and their habitat requirements change they may move or, in the language of fisheries scientists, ‘recruit’ to join the adult populations.

As a consequence of ontogenetic migrations, spawning areas and feeding grounds may be separated by hundreds or thousands of kilometres, and adult fishes may need to migrate between these feeding and spawning grounds every year. Such reproductive migrations may involve all individuals in a population, or may involve only a portion of the population (termed partial migration). 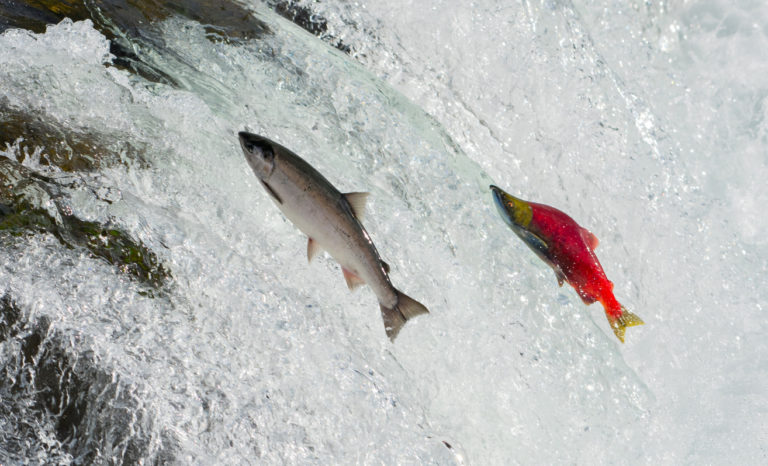 Salmon spend their adult lives in the Pacific and Atlantic but migrate great distances to return to rivers in order to reproduce. © Mantaphoto, iStock, 2019.

As Jon explained in Week 1 the largest migration on Earth in terms of biomass happens every day in the open ocean. A huge biomass of invertebrates and small fishes feeds in the surface layers of the ocean at night when ether are fewer visual predators, and descends to deeper mesopelagic waters between 400 and 1000m during the day. This migration is easily detected using sound waves as the gas-filled swim bladders of small migrating fishes deflect sound waves. Scientists are unsure about just how many mesopelagic fishes exist in the Earth’s ocean, with estimates ranging between 1 and 10 billion tonnes. The movement of such a large number of fishes and other animals has a profound effect on the ecology of the open ocean. Many migratory fishes, mammals and even seabirds depend on mesopelagic fishes; particularly when travelling between zones of high surface productivity.