Skip main navigation
Home / Healthcare & Medicine / Care / The Many Faces of Dementia / Carol’s story: there’s something in the family

Carol’s story: there’s something in the family

Watch Carol describe the journey from her father’s Alzheimer’s diagnosis to the discovery of a gene linked with fAD. We also hear from two of the scientists and doctors at the heart of this discovery, Professors John Hardy and Martin Rossor.

In the video Martin Rossor explains the different genes that cause this inherited form of Alzheimer’s disease and explains how, since they all have a common effect, it makes a clear scientific story implicating amyloid as a cause of the disease. In the years since these were discovered, further genes have been identified that don’t cause Alzheimer’s to be inherited but do increase people’s risk of developing the disease. We take a more in-depth look at these genes in the next step.

This video also introduces the amyloid cascade hypothesis – the idea that the first step in the cascade of changes that leads to an individual developing Alzheimer’s disease is the build up in the brain of tiny abnormal clumps of this protein called amyloid. It’s this hypothesis that has led to the idea that clearing amyloid from the brain might slow or stop Alzheimer’s disease from progressing. We hear about a trial at UCL aiming to do just that later this week.

Here’s a simplified look at the sequence of events leading up to symptoms in familial Alzheimer’s disease, according to the amyloid cascade hypothesis: 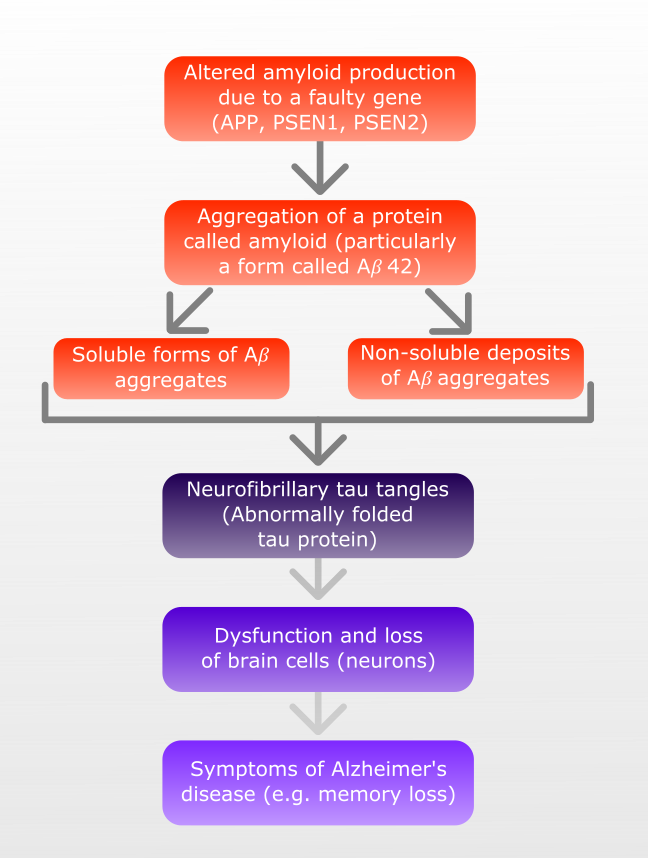