DrTim Shakespeare explains the genes for inherited, familial Alzheimer's disease, and looks at risk factor genes such as APOE.
© UCL 2016 CC BY 4.0

What about other genes that increase the risk of developing Alzheimer’s disease? 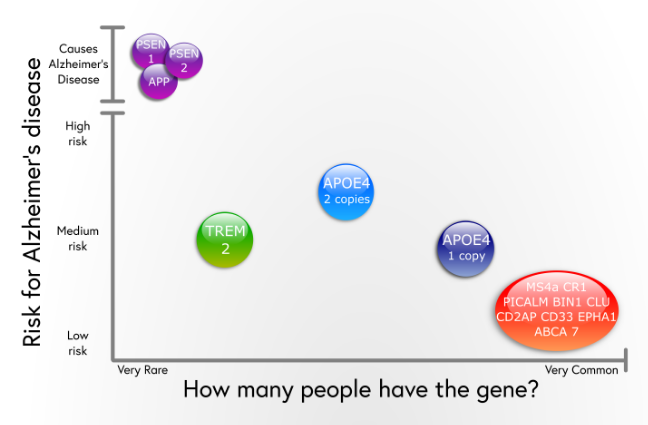 Most people who develop Alzheimer’s don’t have familial Alzheimer’s disease, the particular reason that they develop the disease isn’t clear. It’s most likely to be due to a combination of factors such as age, environment, lifestyle and genetic risk factors. In these cases, the disease is known as ‘sporadic’ – there isn’t one clear cause. Some of the ‘risk factor’ genes are shown in the diagram above. Having one of these genes means you’re more likely to develop Alzheimer’s disease than someone who doesn’t have the gene, but it doesn’t mean you’ll definitely develop Alzheimer’s. These genes increase your risk slightly, but some people with the genes don’t get the disease, and vice versa. There are a number of genes that are very common – lots of people have the form of the gene that increases the risk of developing Alzheimer’s disease, but they don’t have a strong effect. These are shown in the bottom right of the diagram (e.g. CR1, BIN1, ABCA7). TREM2 on the other hand is fairly rare, but has a greater effect than those more common genes2.

Let’s take the example of APOE. APOE is a gene that comes in a number of different variants (known as alleles), APOE e2, APOE e3 and APOE e4, and you receive one allele from each parent. If you have one APOE e4 allele, you have a higher risk of developing Alzheimer’s disease. If you have two APOE e4 alleles (one from each parent) your risk is even higher, but it’s still not a certainty, this is reflected in their position in the diagram above. It might help to understand this in simple numbers.

According to one study3 if we take 100 men aged 85, we would expect 10 to develop AD during their lifetime. The figure for women is slightly higher, 14 out of 100. However, if we take a group of 100 men who have one APOE e4 allele and one APOE e3 allele we would expect 23 of them to develop AD. Again it’s slightly higher for women, at 30 out of 100. The numbers are even higher for people who have two copies of the APOE e4 allele (51/100 for men and 60/100 for women), but having these genes still doesn’t completely determine whether you develop Alzheimer’s disease or not. Having two APOE e4 alleles isn’t all that common, between 10% and 30% of the population may have this particular genotype4,5. The other variants of APOE (APOE e2 and APOE e3) don’t increase your risk, in fact studies suggest the APOE e2 allele is slightly protective.

Can you be tested to see if you carry a gene that causes Alzheimer’s disease?

This is another very common question. It is possible to detect whether people are carrying a mutation in one of the autosomal dominantly inherited genes, APP, PSEN-1 or PSEN-2, through a blood test. As explained above, it is extremely rare to carry one of these mutations, but if you do carry one, then you will almost certainly develop Alzheimer’s disease at a young age, and there is a 50% chance that you will pass on the faulty gene to any children you have. If someone shows symptoms at a young age, and there is a strong family history of young-onset Alzheimer’s disease or someone else in the family is known to carry a faulty gene, then this person can have symptomatic genetic testing to confirm the presence of the gene. If someone doesn’t have symptoms but it is known that one of their parents carried a faulty gene, this person could opt to go through genetic counselling and after that they may decide to have presymptomatic testing to see whether or not they carry the gene (even though they aren’t showing any signs of Alzheimer’s disease yet). This is a very tricky decision: some people prefer not to find out and to live with the hope that they don’t have the gene; others feel that they are better able to plan for the future if they know.