Skip main navigation
Home / Healthcare & Medicine / Care / The Many Faces of Dementia / What are the different forms of frontotemporal dementia?

What are the different forms of frontotemporal dementia?

This article explains the different pathologies and symptoms in frontotemporal dementia and how pathologies go with symptoms.
© UCL 2016 - CC BY 4.0

What is Frontotemporal dementia?

Frontotemporal dementia (FTD) is one of the most common forms of early-onset dementia, symptoms typically start to develop between 50 and 60 years of age.

FTD is so-called due to the loss of brain cells in the frontal and temporal lobes (see image below). However, under the term “FTD” there are actually a number of different disorders that have overlapping features. 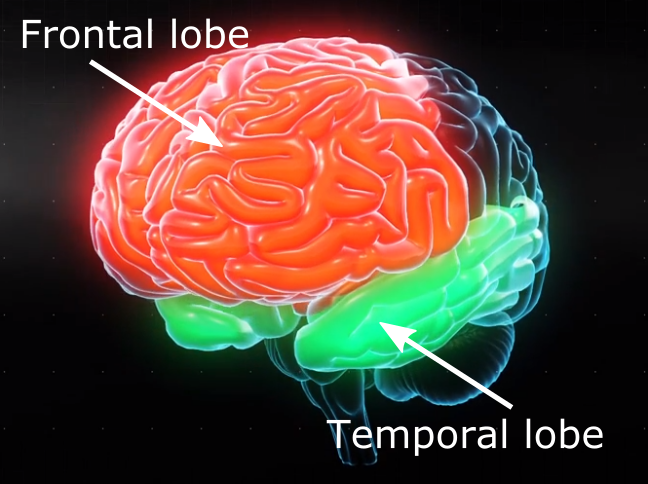 The most common clinical syndrome is the behavioural variant FTD (bvFTD), presenting with changes in personality and social behaviour, and with difficulties in reasoning and planning.

Typical symptoms of bvFTD are loss of inhibition or empathy, changes in appetite (such as overeating the same type of food, especially sweets), craving for alcohol or drugs, and obsessively repeating the same actions.

Another syndrome of FTD is called semantic dementia (SD), characterised by loss of understanding of concepts and facts, and problems in finding the right words or in losing the meaning of words.

In PNFA the meaning of words is preserved, but the patient has difficulties in producing speech, because of either difficulty with grammar or in planning how to move the muscles to articulate words.

Logopenic aphasia (LPA) is also sometimes included as a form of FTD. Patients with language problems usually show greater loss of brain tissue on the left side of the brain than on the right.

About 10% of patients with FTD may develop disorders that affect the movement of the body. For instance, motor neurone disease (MND), also called amyotrophic lateral sclerosis (ALS), affects the motor nerves, causing weakness in muscles that control the limbs, speech and swallowing.

This is more frequent in the behavioural variant than in semantic dementia. Other movement disorders can be associated with behavioural variant FTD or progressive nonfluent aphasia: symptoms of the corticobasal syndrome (CBS, also known as corticobasal degeneration) are typically stiffness and slowness of movements on one side of the body, while symptoms of progressive supranuclear palsy (PSP) include balance problems, falls, stiffness of the neck and trunk muscles, and difficulties in moving the eyes up and down.

In about a third of people with FTD, the disease is caused by a problem (or mutation) in a specific gene, which can be passed on from one generation to another, following an autosomal dominant inheritance pattern.

The main proteins that are found to be abnormal in the brain are called tau and ubiquitin, which can be distinguished into TDP-43, FUS and UPS proteins. There is not a clear one to one association of a clinical syndrome with a particular pathology, nor with a genetic form of FTD.

Behavioural variant FTD is the most heterogeneous of the clinical syndromes and it can be caused by any of the pathologies. Semantic dementia is usually caused by type C of protein TDP-43, whilst progressive nonfluent aphasia is associated with tau or type A or B of protein TDP-43.

In general, genetic mutations in MAPT are associated with pathology in the protein tau, mutations in GRN with the type A of protein TDP-43, while C9orf72 with type A and B of TDP-43 (see figure below). 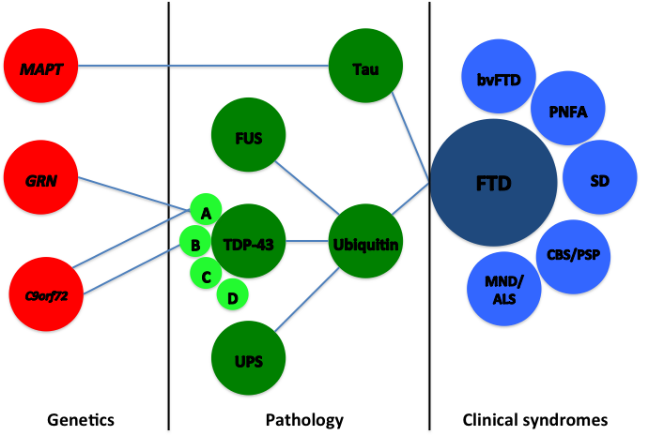