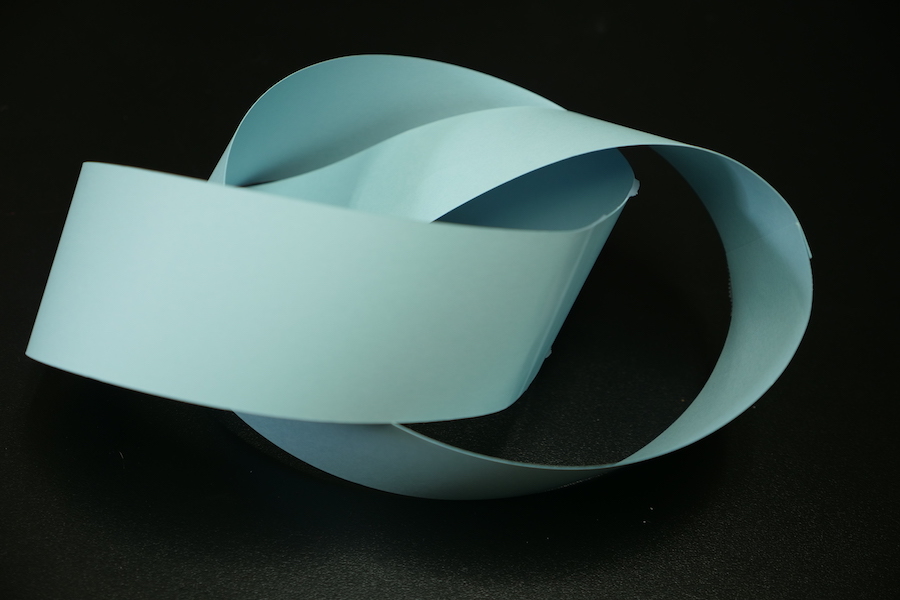 Take a strip of paper, make 3 half-twists in it and join the ends to get a 3 half-twisted Möbius band. Now, cut this 3-strip in half. The result is a Möbius strip with a knot in it. The strip itself has 8 half-twists in it, according to the formula we saw a few steps ago. 3 out of the 8 half-twists make up the knot. This knot is known as the trefoil knot.

The trefoil knot vs. The 3-half-twisted Möbius band

The trefoil knot in a paper band can also be made directly. You just take a strip of paper and tie it into a trefoil knot and then join the ends. The rest is shown in the image above. This trefoil knotted band is also one-sided, just like the 3 half-twisted Möbius band, but it has a different topological structure – it is a knot!

To summarise, making three half-twists in a strip of paper, leads to two topologically different bands, depending on how the strip was folded. If the twists were folded linearly, one after the other, you get the 3 half-twisted Möbius band. If they were interwoven as a knot, you get the trefoil knot.

If we use the notation for paper bands that we’ve used up until now, we’re going to run into a problem. A 3-half-twisted band is not a unique topological description. Are we referring to the 3-half-twisted Möbius strip, or the paper trefoil knot? We run into another problem if we want to name the 8-half-twisted Möbius band with a knot in it. It is neither a “pure” trefoil knot, nor is it a regular 8-band. What do we call it? In a recent chapter that I wrote together with flexagonist Ann Schwartz, to be published soon in the 3rd volume of The Math of Various Entertaining Subjects, we suggested a new notation that distinguishes between different kinds of half-twisted paper bands.

Before we share our notation, we need to learn just a bit about knots and how they are named. Knot theorist Carlo H. Séquin from UC Berkeley tells James Grime all about knots in this wonderful Numberphile video.

Our revised notation for flexagons, Möbius strips and knotted bands

Now we’re ready to present our revised notation for flexagons, Möbius strips and knotted bands. It’s quite simple. The paper band, whether Möbius strip, flexagon or knotted band, is prefixed with two symbols. The first is the paper band’s knot notation according to Rolfsen’s knot table, the table that was presented in the video. Of course, if there is no knot in the paper band, the corresponding notation is that of the unknot: 01. The second prefix is the total number of half-twists in the band, including those that make up the knot. 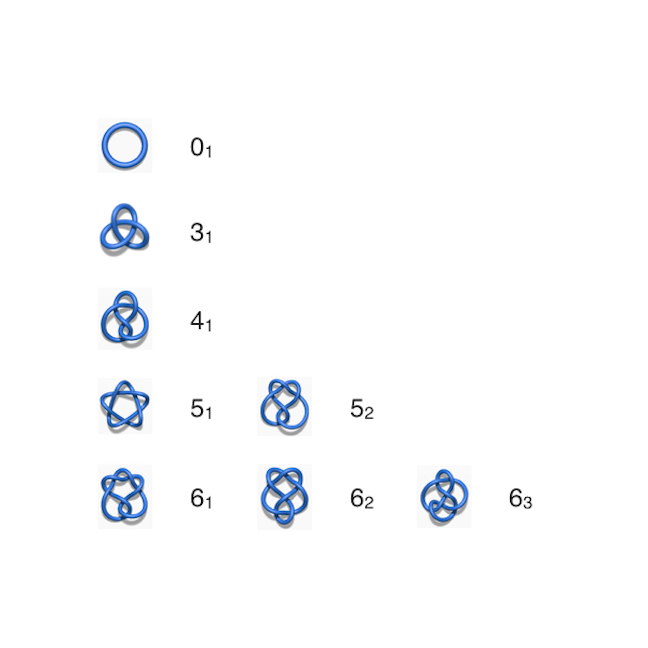 Let’s look at some examples of our notation:

Our notation works well as a general framework for describing paper bands with twists and knots in them. It distinguished between different topologies. But it is far from being complete, for example it doesn’t take into account bands with more than one knot, although this can be remedied by adding more prefixes. Nor does it deal explicitly with pat structures in flexagons. There is still a lot to do and we are currently working on this! If you have any suggestions, please post them below!

We finish this article with another Numberphile video that sums up pretty nicely some of the things we’ve seen.

Any questions or suggestions? If so, please post below so that we can answer!