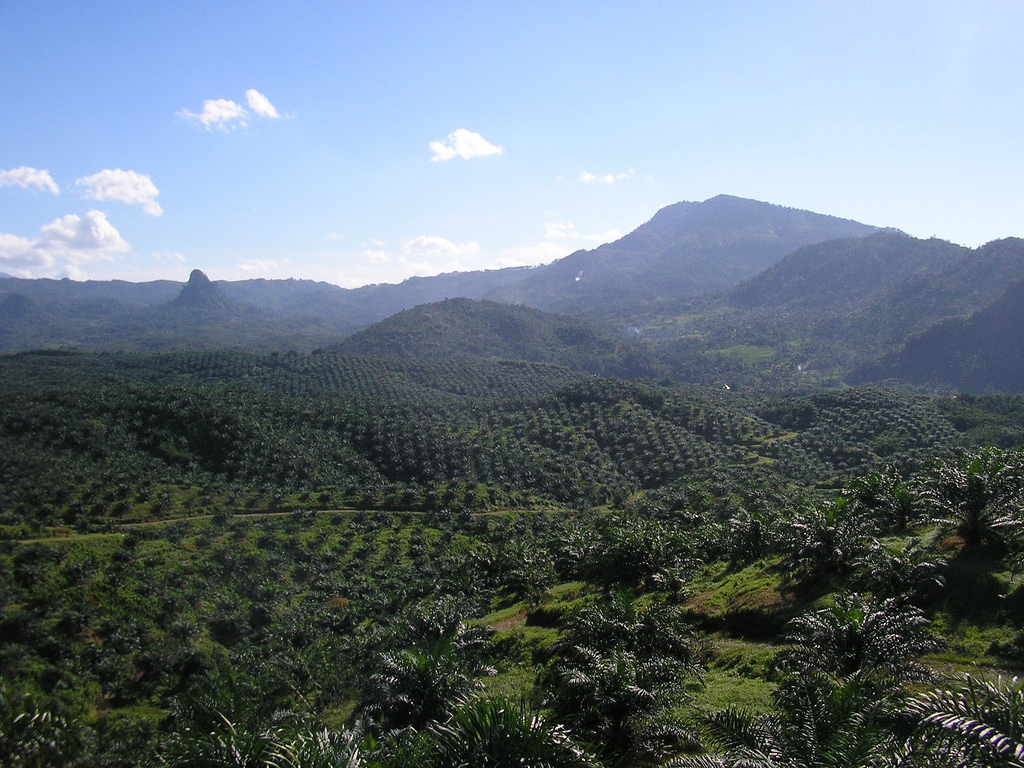 Southeast Asia’s natural resource base is under pressure for several reasons, including socio-economic trends, climate change, the Green Revolution, land acquisitions, and food system changes. Here we take a closer look at the current use of natural resources in Southeast Asia, and particularly the impacts of agricultural practices, but also fisheries and aquaculture, on natural resources.

Changing demographics and dietary preferences are placing increasing pressures on the natural resource base in Southeast Asia. The region has lost 13% of its forest area since 1992 – equivalent to the size of Vietnam – making it a major contributor to global deforestation. This is due to a growing population that depends heavily on timber for livelihoods and fuel, and to rapid conversion of land to agriculture.

Agricultural area in Southeast Asian nations, 1960-2015 (FAOSTAT, 2016).Fox example, palm oil production has increased significantly since the 1960s in Indonesia and Malaysia, which now account for more than 90% of the global market. Studies have shown that 55–59% of oil palm expansion in Malaysia, and at least 56% in Indonesia, occurred at the expense of primary forests, with forest losses between 1990 and 2005 of 1 million hectares in Malaysia and 1.7–3 million hectares in Indonesia. Increasing demand for palm oil for biodiesel, both nationally and internationally, may cause more production, driving further deforestation in both countries. In Thailand, meanwhile, the stock of natural resources continually dropped from the 1960s up to the 1997 economic crisis, but has improved since. Thailand’s forest area, for instance, declined by about 50,000 km2, or about a quarter, in the 1980s and 1990s, but has roughly regained its scale in the 2000s. However, both forest loss and agricultural intensification have led to land degradation. In the uplands, forests were replaced with plantations of cash crops, such as sugarcane and cassava, and this has reduced the soil’s capacity to absorb water in the uplands, leading to erosion during intense rainfall. Other significant drivers of deforestation in Southeast Asia include state-sanctioned timber extraction and transmigration (resettlement of people from cities to rural areas). At the same time, wildlife has been harmed by overexploitation, driven by demand from East Asia. Water scarcity is another growing problem. Drought is the most important limiting factor for rice production and is an increasingly severe issue in Southeast Asia, particularly affecting harvests in Cambodia, Laos, Myanmar, Thailand and Vietnam. Yields in rainfed areas have been found to decrease on average by 17–40% in severe drought years.

View Course
Water use efficiency is highly related with use of fertilizers and other inputs, which affect the actual yield of the crop. Southeast Asia, and in particularly Thailand, make inefficient use of fertilizers, pesticides and energy. The quantity of pesticides applied per hectare in Thailand increased sixfold between 1987 and 2010, while pesticide productivity (output per unit of pesticides) fell by 7.4% per year. Economic and environmental costs have risen, and workers have suffered serious health impacts. The good news is that overall, total factor productivity (the ratio of total crops and livestock products to total inputs, including land, labour, capital and materials) in agriculture in Southeast Asia has risen significantly in the past 50 years. While before, output gains were driven primarily by increases in resources, they are now primarily driven by productivity increases. However, the gains are uneven. In Indonesia, for instance, productivity growth is concentrated in the western and northern regions of the country – Sumatra, Kalimantan and Sulawesi especially – where production of export commodities like palm oil and cocoa is expanding rapidly. In Java and the eastern provinces, total productivity growth is low or stagnant.

The countries of Southeast Asia extract many tons of fish from the region’s wide coastal and marine areas. Rates of removal have risen quickly and consistently since 1980: UN data indicate that since 1980, every nation has doubled both exports and catch, and most nations have more than tripled both. Studies suggest marine fisheries are critically depleted, leading to destabilized marine ecosystems and a loss of livelihoods for artisanal fishers. It is crucial to improve management of wild capture fisheries, which comprise more than half of fish production in many Southeast Asian countries, as aquaculture alone cannot fill the gap left by depleting fisheries as the population grows. Still, small-scale aquaculture is an important economic activity in the region – and it too requires attention to address ecosystem impacts that directly and indirectly undermine food security, including biodiversity loss, eutrophication and excessive freshwater use. A country comparison shows large differences of the impacts of aquaculture across the region, suggesting scope for major improvements.

Hi there! We hope you're enjoying our article: Natural resource use
This article is part of our course: Food and Our Future: Sustainable Food Systems in Southeast Asia