This article focuses on the basics of fungal diagnostic tools and highlights the importance of diagnosis for critically ill patients.
© BSAC

Fungal infections in immunocompromised and critically ill patients can be challenging for a number of reasons.

What are fungal infections?

Infections are often deep-seated, at sites that are difficult to access – e.g., the lung – meaning invasive procedures are required to get direct samples for a diagnosis. In critically ill patients, such procedures are frequently not possible due to the risks involved of tissue biopsies or broncho-alveolar lavage.

Samples from superficial sites, including sputum, urine and skin, may represent fungal colonisation and is not representative of invasive fungal infection. Some fungi (e.g. Aspergillus spp.) are ubiquitous and are prone to contaminate samples and the lab diagnostic process.

Patients may also already be on empirical anti-fungal agents which compromises the recovery of fungi from cultures making a diagnosis more difficult.

Classically, there are direct tests and indirect laboratory tests that can aid the diagnosis of invasive fungal disease (IFD). 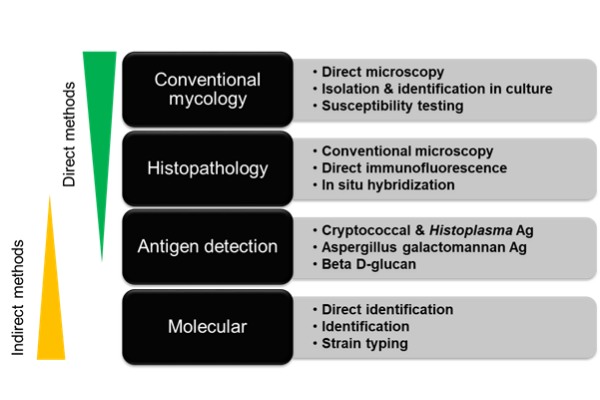 Direct tests have the aim to visualise or recover the fungus directly from patient samples such as blood cultures, BAL, sterile fluids such as cerebrospinal fluid (CSF) or tissue samples.

It involves basic microscopy and conventional culture. Special stains can be applied directly to clinical samples to make it easier to see fungal elements. For example, fluorescent dyes such as calcofluor can make it much easier to recognise fungal elements such as Aspergillus hyphae in a bronchoalveolar washing using a fluorescence microscope.

Other fungi such as Candida can be seen directly on a Gram stain as purple fungal elements in a positive blood culture confirming the diagnosis of candidaemia. Read more on direct diagnostic tests here.

The diagnosis of invasive fungal infections is often compromised by the fact that the infection is at a deep site that is not easily accessible for sampling without invasive procedures. Critically ill or immunocompromised patients may be too ill to undergo procedures such as CT guided biopsies, bronchoscopies and additionally may have clotting disorders with a risk of causing bleeding during such investigations.

The development of non-direct laboratory tests has, therefore, been very helpful in providing surrogate markers for possible invasive fungal infections. These tests are based on the detection of fungal antigens or compounds released by actively growing fungi.

One of the most established serological tests is the detection of cryptococcal antigen (CRAG) in serum or CSF. In the CSF it is indicative of cryptococcal encephalo-meningitis. The test can be performed in form of an agglutination test or a lateral flow test utilising the principle of an antibody-antigen reaction.

These components are released by growing fungi and can be present in human body fluids (e.g. serum, CSF). They are useful markers for the investigation of invasive fungal infection in conjunction with radiological imaging and clinical presentation.

The absence of these fungal biomarkers is sometimes useful to exclude infection and aid decision-making on stopping unnecessary antifungal agents (anti-fungal stewardship). However, it is important to note that not all fungi contain or release these cell wall components, which means some fungal infections may be missed (e.g. mucoracious moulds).

Equally, there can be false-positive fungal biomarker results as some food products, use of immunoglobulins etc. may contain similar compounds.

β-1-3-D-glucan (BDG) is a polysaccharide found in the cell wall of many pathogenic fungi. It is therefore not specific to any kind of fungal infection and is often referred to as a “pan-fungal” biomarker. It is released by Candida, Aspergillus and Pneumocystis but, importantly, not by Cryptococcus or the mucoraceous moulds. In visceral candidiasis (e.g. liver abscess), Candida often doesn’t cause candidaemia whereas the BDG is often detectable in the serum helping to make the diagnosis in conjunction with relevant imaging. Read more on β-1-3-D-glucan here.

Galactomannan (GM) is another fungal cell wall component particularly found in Aspergillus species. Therefore, it is often called the “Aspergillus galactomannan test”. However, it is also present in the cell wall of other filamentous fungi (Figure 5.) Read more on Galctomannan here.

Molecular techniques such as PCR can help to make a diagnosis of fungal infection. For some infections such as Pneumocystis, PCR is a very specific and established diagnostic tool when used on deep respiratory samples such as BAL or induced sputum.

The result has to be interpreted in conjunction with clinical signs and symptoms and radiological imaging as PCP can also be ‘just’ colonising the upper airways without causing infection. Combining PCP with serum BDG can often be a very useful way to distinguish colonisation versus infection (serum BDG is very high in PCP compared to colonization). Read more on fungal PCR here.

All in all, Pan fungal PCR methods, including 18s based methodologies, can be helpful when cultures remain negative and/or fungal elements may be seen in histological samples from tissues or fluids.