Probability or specificity – evaluating the evidence

Dr Lewis White discusses the probability and specificity of fungal diagnostic tests and begins to evaluate some of the evidence for these approaches.
© BSAC

While the probability of infection is obviously proportional to the specificity of the test, it is important to understand the influence of incidence (pre-test probability).

Incidence will not affect the specificity, but it will influence the positive predictive value (post-test probability) of a test, particularly if the disease being diagnosed by the test is of low incidence (<10%), which is typically the case for invasive fungal disease (IFD).

For an infection such as invasive aspergillosis (IA), an incidence of 5-10% is typical, in high-risk haematology patients, so prior to performing any test the probability of IA could be as low as 5%. Conversely, the probability of a patient not having IA is 95%. It is therefore difficult to gain a post-test probability >50%, irrespective of test specificity. Obviously, a test with 100% specificity confirms IFD/IA, irrespective of incidence, but such tests rarely exist in mycology due to the ubiquitous nature of fungi. 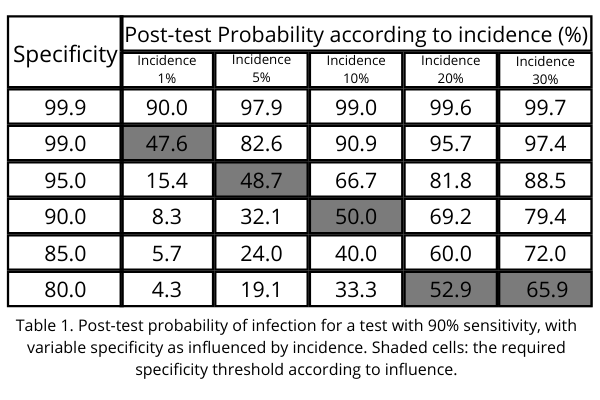 If you require a screen-reader compatible version of the above image, this is available as a PDF.

This raises the question of when to treat a patient at high-risk of IFD (albeit with a likely low incidence) with a positive mycology result. One strategy is to rely on the use of combination testing, where multiple positive results from different tests significantly improve specificity. In the previous section 1.9, combining galactomannan ELISA testing with Aspergillus PCR to aid in the diagnosis of IA generated a specificity of 98%, when both tests were positive, and at incidence of 5% provided a post test-probability of IA of 72%.

From a statistical perspective, using the positive likelihood ratio (LR +tive) may be a useful parameter for determining the significance of a positive result. While likelihood ratios are used to calculate the post-test probability of IFD, based on the initial incidence and using Fagan’s nomogram, their values are less affected by incidence (Table 2). 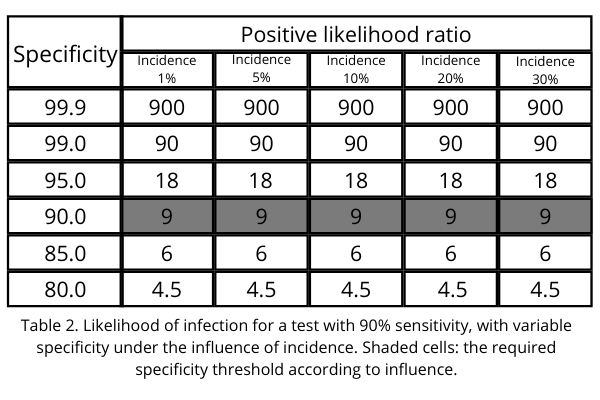 If you require a screen-reader compatible version of the above image, this is available as a PDF.

A positive result from a test with a LR +tive threshold of 10 (i.e. 10 times more likely to see a positive result in a patient with IFD than without IFD) is a widely accepted as a good indication of disease, and a test with >90% specificity would provide this performance irrespective of incidence (Table 2).