Introduction to prime and composite flexes

In this article, Yossi Elran tells us the difference between prime and composite flexes. 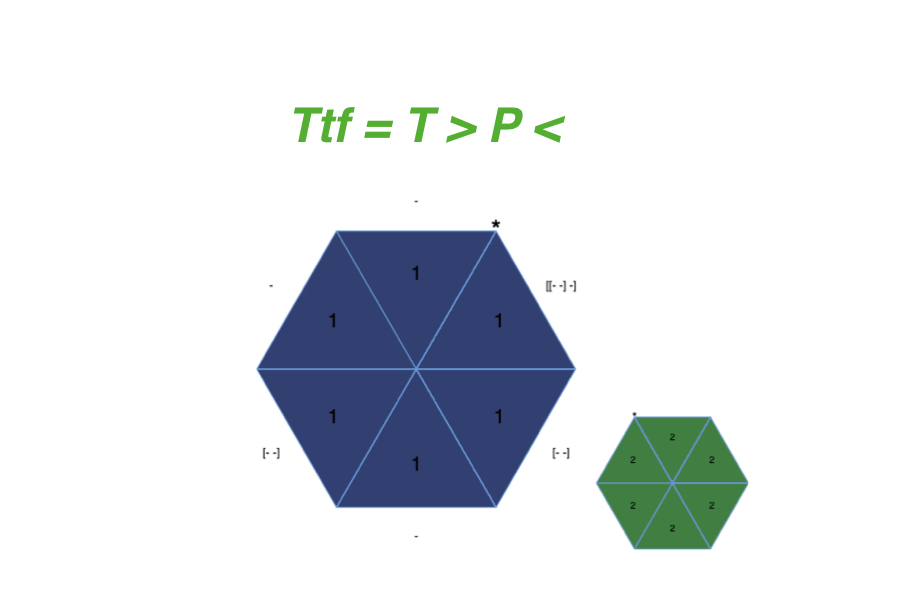 Up till now, we have learned six flexes:

These flexes are all prime flexes. This means that they cannot somehow be broken down into simpler constituents. comprised of two or more simpler flexes, just the same way as a prime number is a number that cannot be factored into smaller constituents – it cannot be obtained by multiplying two smaller numbers larger than 1.

Just like you can take two prime numbers, say 3 and 11, and multiply them to get a composite number, 33, you can combine two flexes and get a composite flex. For example, we can define: Ttf = T > P < as a composite flex. So we can use the new symbol we just made up, Ttf, to mean make a tuck flex, rotate the flexagon clockwise, make a pinch flex and rotate the flexagon counter-clockwise. This is known as the composite tuck top front flex. If you’re just making a series of flexes, it makes no sense to cluster sub-groups of flexes, call each sub-group a composite flex, and give them a unique name and symbol. This would just cause more confusion and an inflation of names and symbols.

However, in some cases, such as the composite tuck top front flex, it is useful to name and label them. This is because, the movements themselves in reality are not made by just flexing the series of constituent prime flexes, but by a simpler, smoother movement. In fact, in many, if not all of the composite flexes that Scott Sherman names, the equivalence of the composite flex with its constituent prime flexes was discovered only afterwards by analysing the structure of the flexagon states before and after the movement.

To make this point clear, let’s take another look at the tuck top front flex. Sherman made a movement very similar to the regular tuck flex, except that instead of opening it from the back (in the last stage of the flex), it is opened from the front. After looking at the resulting state, he realised that the same state can be obtained from the initial state by flexing a (regular) tuck flex, rotating the flexagon clockwise, making a pinch flex and then rotating the flexagon counter-clockwise.

As usual, this is a simplified explanation of the relationship between prime and composite flexes. things can and do get more complicated. First, it is more correct to use the term prime relative, to state that a flex is prime relative to a (sometimes) sub-group of other prime flexes, rather than claiming a flex to be universally prime. This means that the flex cannot be constructed from any combination of flexes within a given group. This is usually just ‘mathematical’ caution, since many flexes – even prime flexes – have not even been found yet, so maybe a flex that we thought to be prime will turn out to be composite.

Second, in some cases, whether or not you can perform a flex depends on the physical attributes of the flexagon – the number of leaves, the angles etc, so we might find ourselves trying to flex something that in principle is possible, but in practice cannot be done, or for cases when for some structural or other reason, the composite flex equality is not always valid. Therefore, Sherman defines the notion sometimes equal, using this sign: ~= instead of the usual equals sign =. A well-known example using this term is: T’ ~= ^T^, meaning that the inverse tuck flex (reversing the tuck flex) is not always equal to turning the flexagon over (^) doing a regular tuck flex and then turning the flexagon back over again. This is surprising since most of the prime flexes can be reversed using this procedure, i.e. P’ = ^P^, meaning that to reverse a pinch flex, turn the flexagon over to a regular pinch flex from the same corner and turn the flexagon back over again.

It is also useful to use != to mean not equal.

The prime slot tuck top back flex, notated Ltb (we have not learnt this flex yet), is also quite unique – it can never be reversed by the procedure above, hence, Ltb’ !=^Ltb^.

We will be using these equality relationships in the next steps:

In the next following steps we’ll take a look at some interesting composite flexes and their equivalences.

Any questions? If so, please ask below and either myself or one of the other participants will answer.