The video above shows how to fold the flexagon. The template for the flexagon can be downloaded below (template number 16 in the flexagon booklet). It’s an unusual template since there are uncolored triangles with funny numbers (like -10, 9, and 11) – but don’t worry about that. Fold the paper strip into a hexagon – make sure you fold exactly as shown in the video. Watch at half speed and pause if/when necessary. Note the unusual folding together of leaves with different colours!

All the slot flexes begin with the same move – pushing two leaves through a “slot” and opening up to an intermediate state made up of two square pyramids. Watch the video to see how to get to this intermediate state.

It’s important to orientate the flexagon correctly to make flexing easier and understandable. The first step is to fold the flexagon in half along the hinge where you taped the two end leaves (the hinge is also marked with two asterisks on the green (number 2) face and one astersisk on the blue (number 1) face. Then, open outwards a concave, square pyramid with leaves numbered 3,9, -10 and 11, and a second convex square pyramid, labeled 1 (blue) on the outside and 2 (green) on the inside.

Once you’ve pulled both pats through the slot, stop. Now, just press firmly (between your thumb and finger) the second leaf that comes through, to the upper side of the convex pyramid, so that the leaves numbered 1 (blue) and 4 (purple) touch each other. You’ll get two, square concave pyramids, one – numbered 2, 9, -10 and 11, and the other numbered with three 5’s and a 1.

This is an important intermediate state, since it is the end of the “slot” part of all slot flexes, and it is from here that you can make other moves.

The half slot flex

The easiest slot flex is probably the half slot flex. It is shown in the video above.

From the intermediate state, fold flat the two pyramids. Bring the two number 5 pats to the pats numbered 5 and 1, on the relevant pyramid, and the numbers 9 and 2 to the numbers -10 and 11 on the other pyramid. Flatten the shape into a half hexagon and open up. To summarise, doing the half flex is just bringing the pats through the slot, creating the two square pyramids and flattening them. To undo, just work backwards!

Let’s return to the intermediate two pyramids state. Notice that you can flatten – or perhaps it’s better to say close – pyramids and open them from other directions. This is called “pocket” flexing.

The video above shows you how to do the slot pocket flex. On the relevant pyramid, fold the two pats numbered 5 and 1 to the other two pats (both numbered 5). Now, pocket flex the other pyramid: close it bringing pats -10 and 11 to pats 9 and 2, and open up from the pyramid’s tip. Exposed is a new pyramid with three number 4 pats (purple) and one number 1 pat. Now close this pyramid by bringing the two number 4 pats (purple) to the pats numbered 4 (purple) and number 1 (blue). Open the half hexagon (trapezoid) from the smaller side – and that’s it!

Here’s a cool discovery! This state can be pinch-flexed to get the state that we got originally by doing the half slot flex – and vice-versa. The two flexes are known as “pinch complements” with regard to this flexagon. Both the half slot flex and the slot pocket flex are composite flexes. They can be constructed using some other slot flexes that we’ll mention next.

The slot tuck flexes all start out from the two pyramid intermediate state. Now, on to another intermediate state. After passing the two blue-green pats through the slot, instead of pushing the blue-green, 1-2 pat towards purple leaf number 4, push it the other way towards the leaf numbered 11, to get a concave, six-pat “boat” shape, with pairs of pats numbered: -10 and 9, 1 and 4, and 1 and 5.

These images show how, after doing a slot tuck bottom flex you can either fold downwards to get one state, or unfold upwards to get a different state.

Folding downwards to get the state from a slot tuck bottom front flex: 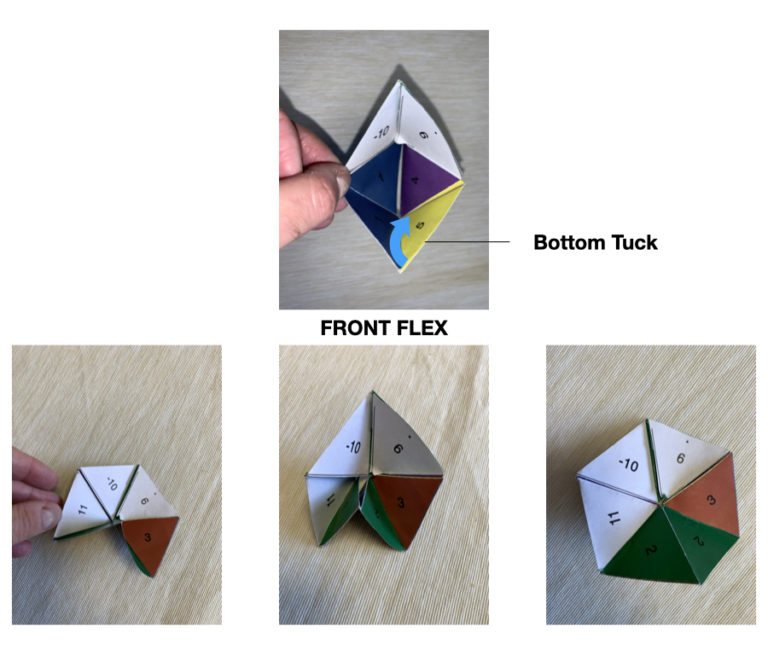 Unfolding upwards to get the state from a slot tuck bottom back flex: 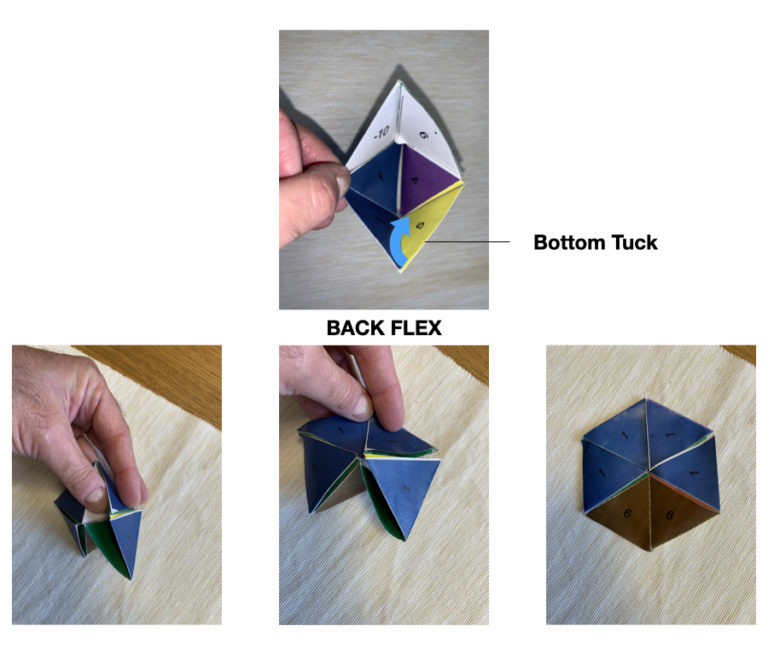 All in all, there are four slot tuck flexes.

In this flexagon, after the bottom or top tuck, whether we do the back or front flex, we get the same flexagon. The only difference is that the front flex opens up to one side of the flexagon and the back flex opens up to the other. In other words, Lbb=Lbf’ and Ltb=Ltf’. However, this is not always the case.

We’ve left you the slot tuck top flexes – to try and do yourself – without the aid of images and videos.