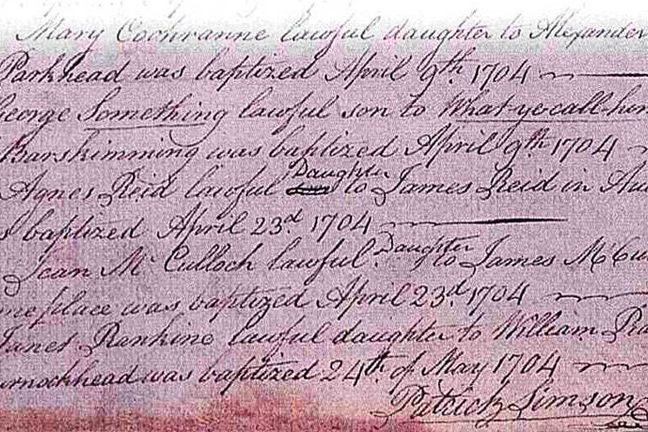 What are they and why are they created?

Generally, religious records are created by a religious body (churches, mosques, synagogues, etc.) to record the events of its members such as baptisms, marriages and burials . However, they can also include other types of records such as pew rentals, records of rabbis visiting the sick, the calling of marriage banns, pilgrimage records, religious court records, congregation membership lists and so on.

Many records will have been created to keep track of whether an individual had taken part in a necessary element of his or her religion; baptism, circumcision, pilgrimage, etc. In some areas where the religious body had responsibilities such as providing education and poor relief to the local population; records would have been kept to help identify who belonged to a congregation and thus should have had access to support. In Scotland, for example, a child with an acknowledged father could not become the responsibility of the parish but rather should be supported by that father.

Typically religious officials, (clergy, rabbis, imams, clerks, nuns, etc.) will create the records at the time of an event. However, there is clear evidence that sometimes a gap would occur between the time of an event and its recording in a register with unfortunate results. See the image that accompanies this article for an example of this from a Scottish parish baptismal register.

Sometimes clerks had to provide their own ink and paper and this could have a detrimental effect on the quality of the records as ink was watered down and as much text as possible crammed into one page. Some religious bodies did provide printed forms for their clerks to fill in and these are often easier to use than the more free form registers.

Is there an established religion in the country of interest?

An established religion is officially recognised by the state and this status can confirm many responsibilities and rights upon that creed or body. Records from an established religion can serve as legal documents and can provide, for example, conclusive proof in family disputes, particularly relating to inheritance.

If your ancestors lived in a country with an established religion you may find them in the records of that religion even though they did not follow that particular faith in private life. In many parts of the world, belonging to a particular religious body provided access to legal landownership, the ability to undertake higher education, the right to marry legally and so on.

Consider the status of Catholics in England post-Reformation who due to a series of penal laws were not allowed to transfer land, hold military or government offices and endured a wide range of restrictions on religious activities.

If your ancestor belonged to a faith outside the established religion, then you may find those records less easy to access; however this is not always the case. The records may still be held by the faith body in question but sometimes they have been donated to local archives so do check.

Be aware that faith groups split and then sometimes come back together. You may find that one year, for example, your ancestors belong to the ‘Anti Burghers’ and the next to the ‘New Lichts’ by following a seceding minister into a new group. All too often when groups split records get lost in the disruption which is a challenge for genealogists.

Religious records continue to be created even after civil registration begins in a country so remember to source these up to the modern day.