What is the Polymerase Chain reaction PCR in terms of a genetic concept
View transcript
5.3
Sequencing can tell you the exact order of genetic basis within a SARS-CoV-2 positive sample and gives us vital information about the virus. But what happens when not all samples are positive? The SARS-CoV-2 samples used for sequencing might be derived from a nasal or oral swab and you might have done one of these yourself. If you’ve taken a nasal or oral swab for SARS-CoV-2, you might have been about to register that sample for a PCR test. A PCR test gives scientists and clinicians information about whether a sample is positive or negative.

Deoxyribonucleic acid (DNA) and ribonucleic acid (RNA) are amongst the most important molecules for life on earth – they’re responsible for the storage and translation of the genetic code. DNA and RNA are both linear polymers (chains of molecules) – they consist of sugars, phosphates, and bases, linked together in a chain (Figure 1). 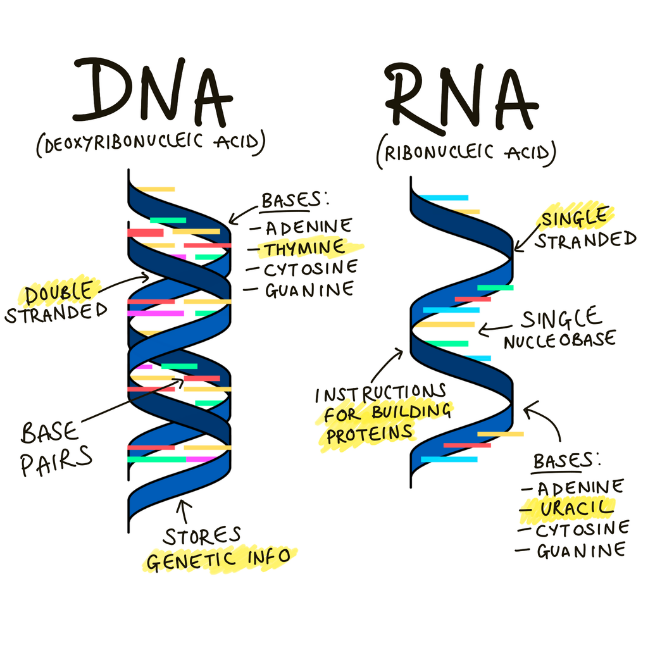 DNA is a double-stranded molecule comprising of four nitrogenous ‘bases’, each strung together along a carbon backbone – these bases are known as adenine (A), thiamine (T), cytosine (C) and guanine (G).

The sequence in which DNA bases occur provides the genetic code within human cells. Some viruses, such as SARS-CoV-2, use RNA rather than DNA as their genetic material.

RNA is a single-stranded molecule, and it also comprises of four nitrogenous bases. Like DNA, RNA contains adenine (A), cytosine (C), and guanine (G) – instead of containing thiamine (T) RNA’s fourth base is uracil (U).

The subtle differences between DNA and RNA have implications for viral sequencing. To read the genetic code of SARS-CoV-2, it’s RNA must first be converted to DNA – allowing it to be ‘read’ by the sequencing machine (Table 1). 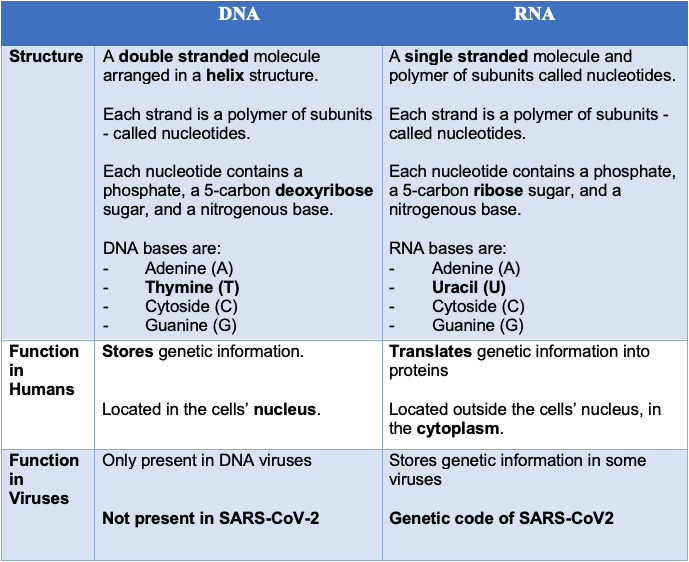 Polymerase chain reaction (PCR) was first developed by Kary Mullis & team in the mid-1980’s, revolutionising the way that clinical samples are tested. The development of PCR has enabled other techniques to be established, including sequencing, cloning and genetic engineering. This wider suite of genomic technologies has enabled clinicians and virologists to understand the characteristics of an active infection, interactions between the host and organisms, and the effectiveness of treatment regimens. Throughout the current pandemic, PCR has been used to diagnose COVID-19 and to provide a template for genomic sequencing, to characterise the specific virus within an infected individual.

PCR targets and amplifies a specific region of single or double-stranded DNA. The following components are required to conduct a PCR: two oligonucleotide primers that flank the DNA sequence being amplified, thermostable polymerase; nucleotides, buffer (including Mg2+, to create an optimal pH) and water.

1) Denaturation (about 95°C)- this is the separation of the strands of DNA through melting the double-strand templates apart. The melting temperature depends on the length and the sequence of the template in addition to the duration of the melting

2) Annealing (55-60°C)- this is the attachment of the primers targeting specific sequences. The temperature depends on the primers used. Protocols often use a temperature a few degrees below the melting temperature to enable the stable complexes to be formed with the target sequences and avoid binding with any other sequences.

3) Elongation (72°C)- this is the synthesis of new strands of DNA with help from DNA polymerase, which is used to anneal the primers whilst stabilizing the complex.

These temperatures are regulated with a thermocycler, which can be programmed to change according to the PCR of interest. The experimental conditions are critical to the outcome of the PCR reaction. For example, if annealing temperature is too high, there might be insufficient primer-template hybridization. If it’s too low, it could result in the creation of non-specific products, which are formed from a large number of base pair mismatches. It is important that the magnesium ion concentration is optimised for each primer being used. There is a balance between providing enough magnesium to provide stability to the polymerase, whereas too much magnesium can mean the primer binding may become non-specific.

Pros: Sensitive as only one copy of target DNA is sufficient, easy to use and is a rapid technique. Cons: There is a risk of false positives if there is cross-contamination; the analysis of the results are not automated, it requires the post-PCR processing to be able to read the results (gel electrophoresis and therefore poor resolution); it is not a quantitative method and therefore it does not provide information on template target DNA.

Real-time PCR, also known as Kinetic PCR, was developed in 1992 and allows for the semi-quantification of the amount of nucleic acid present. By measuring fluorescent dyes or probes, this has enabled the proportional comparison to the amount of product made from amplification and the amount of cycles required to form a threshold amount of amplified DNA. This approach has been used for many years in virology and has been utilised in the current pandemic to prioritise samples that are more likely to generate a good quality sequence. The PCR efficiency has to be calculated when considering this; usually this represents a doubling of the amount of cloned nucleic acid per cycle of amplification. With this in mind, the amount of DNA molecules originally present in the sample can be measured.