This article will present the SARS-CoV-2 virus, causative agent of COVID-19 and the current pandemic. 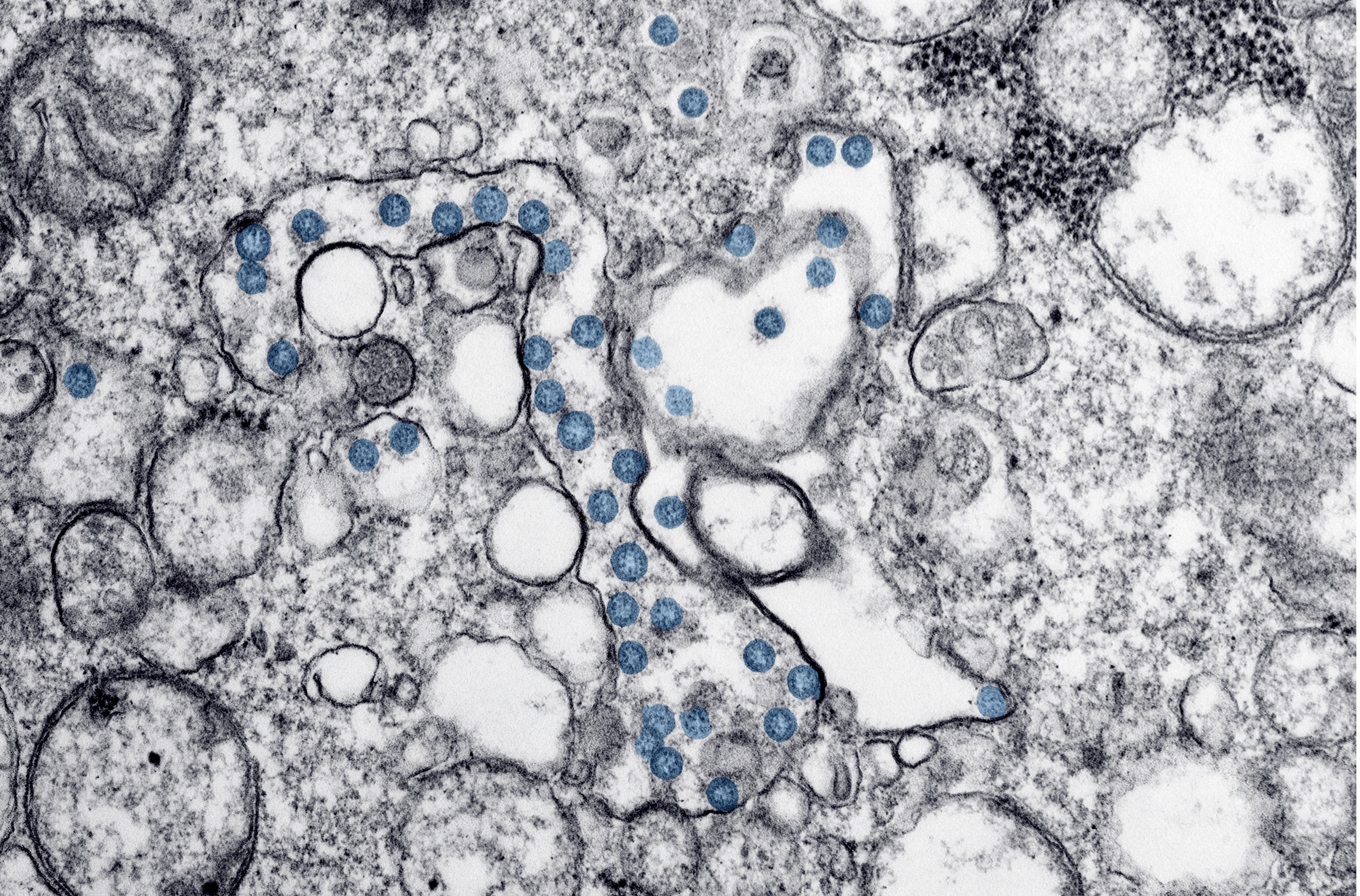 SARS-CoV-2 is an RNA virus. RNA can be either single or double stranded and the SARS-CoV-2 genome is composed of single stranded RNA of just under 30,000 bases.

Next week in steps 2.5 and 2.6, we will focus on the spike protein and how this enables the virus to enter the host cell. Here we will look at what happens next. To enter into a cell, the virus must recognise and bind to a receptor. SARS-CoV-2 Spike uses as receptors two specific cell-surface proteins (ACE2 and TMPRSS2), most frequently found on cells in the upper and lower respiratory system. After entering host cells, the SARS-CoV-2 genome uses the cell machinery to produce copies of itself. In this process, called replication, the virus multiplies its RNA genetic code and generates its proteins. Two large proteins (ORF1a and ORF1b) are generated and will be broken down into the non-structural viral proteins (nps1-16). The genome also encodes the structural proteins Spike (S), Envelope (E), Membrane (M) and Nucleoprotein (N) and a few other proteins that interact with the cell function (Figure 1). 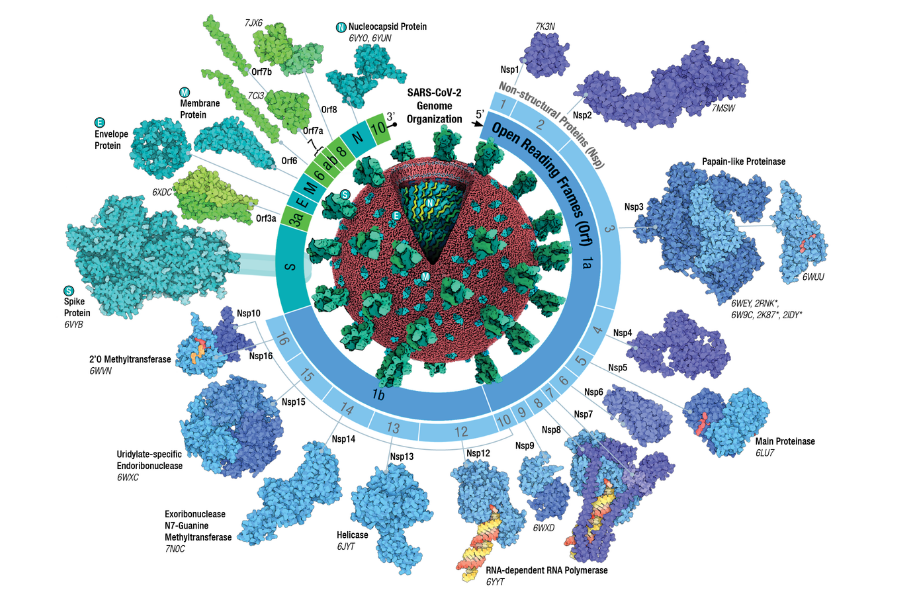 All these pieces are then assembled into new viral particles and released from the cell to infect new cells. Some viruses may enter the bloodstream and find their way to organs other than the lungs such as the heart, brain and kidney. This may cause additional damage and wide-ranging symptoms. 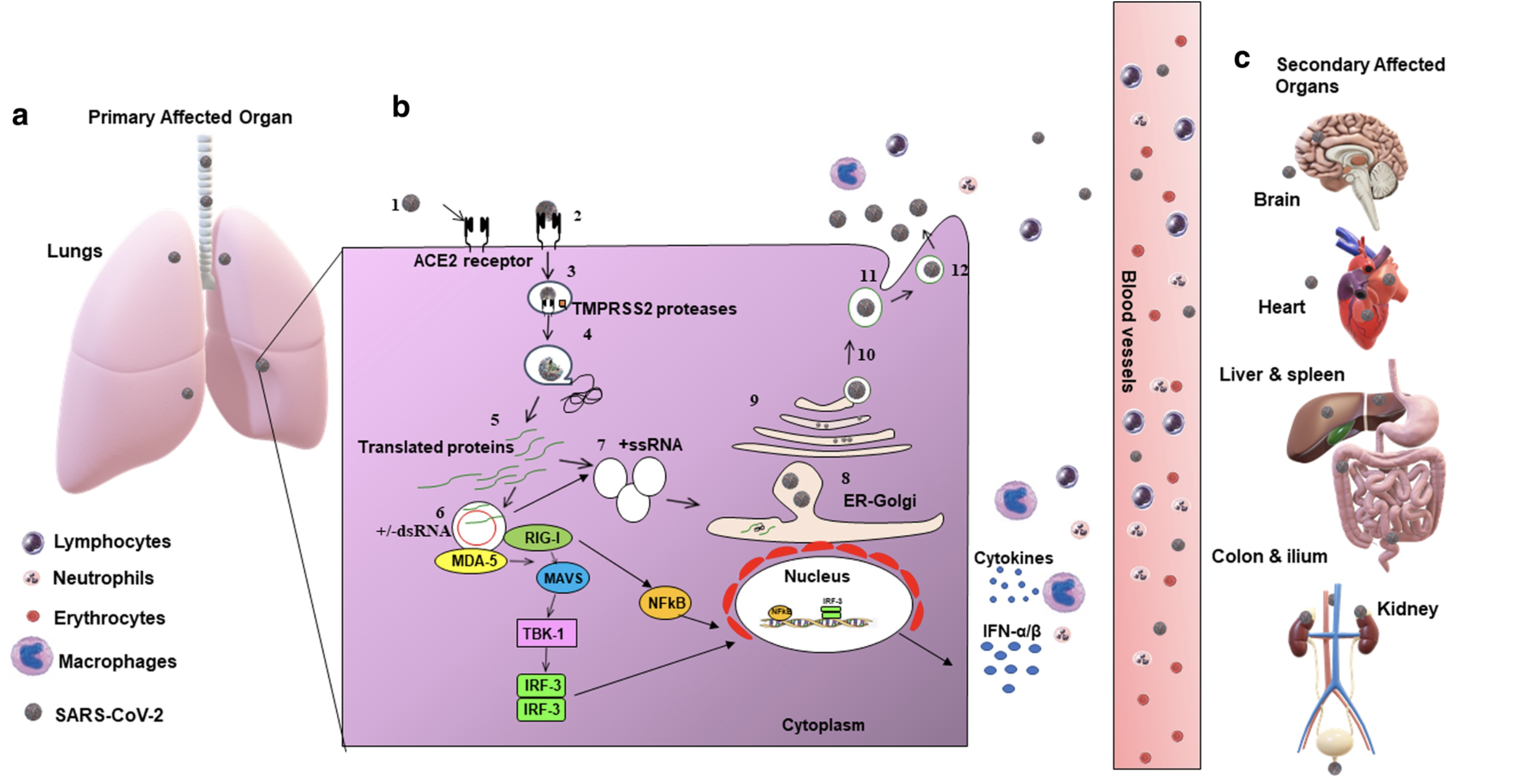 Figure 2. The SARS-CoV-2 replication and pathogenesis. (a) The SARS-CoV-2 infects the upper and lower respiratory tract. (b) The virus replication from 1 to 12 has been described as: (1-2) The virus identifies the ACE-2 receptor. (2) The Spike (S) protein of SARS-CoV-2 binds to the ACE-2 receptor. (3, 4) The virus-receptor internalization occurs and a membrane fusion is carried out followed by the release of the viral genome inside the cell. (5–7) Replication of viral genetic code and generation of viral proteins. (8–10) Assembly of new viral particles. (11–12) Budding of recently formed viral particles from the infected cell. (c) The virus disseminates to the other part of the body through blood affecting the brain, heart, liver spleen, large intestine and kidneys. Source: Respiratory Research