An overview of refractive errors in Africa

An overview of refractive errors in Africa
View transcript
12.1
DR.
12.1
ANNE EBRI: Africa is a huge continent with varied challenges from setting to settings, from country to countries. But I’d like to start by saying that the major challenge now would be the lack of data, lack of data on refractive error and refractive services. So it makes planning and implementation and even assessment of implementations very difficult. Another challenge would be the varied human resources, providing refractive error services. We have some that have been trained for a few weeks, those who have been trained for six years. And so in some parts, the skills are almost no there. And then you have the super skilled ones.
60.4
Even those who are now trained as optometrists– for instance, in some countries where you have adequate number of optometrists, there is the issue of maldistribution. So you have very well-trained personnel, but they are all crowded in the city areas. And why is this so? Because it is private-sector driven. And, of course, because it is private-sector driven, these optometrists set up their own clinics so that they can make money. And we end up having a [INAUDIBLE] programme, more or less. So refractive error hasn’t really been embedded in the comprehensive eye care system as it should be.
103.6
In some countries, for instance in Nigeria and in Ghana, where a little bit of refractive error is going on in the public hospitals, we seem to not have the provision of spectacles. So these are some of the challenges that we have in refractive errors in Africa.
125.2
SPEAKER 1: That leads me on to the next part, which is, you’ve raised the point of human resources. What has been the progress that has been made in terms of human resource development in Africa? DR.
136.6
ANNE EBRI: One of the key developments, I would say, is the existence now of training schools in Africa. So training schools are available now for the French speaking. They are also available for English speaking, so there are four-year [? BSE ?] programmes in Malawi. And there’s another one in Uganda that’s coming up. And Eritrea actually has started graduating students. So this is a very important development. And we also have a school in Mozambique for the Portuguese speaking. So this has opened up access to all Africans who intend to study optometry. So this is actually a good development, optometry.
184.6
SPEAKER 1: It’s great to see the development that’s being made in terms of human resource training. In your experience and in the Nigerian setting, then, what would you say is the acceptance of spectacles. How are they received in the community? DR.
201.5
ANNE EBRI: They’re not well received in the communities. Now, in the cities and amongst those who are educated, yes, spectacles are accepted. But quite a large number of people still reject spectacles as a management or a means of treatment. There’s quite a lot that needs to be done. There’s quite a lot of investment that needs to be done to change this belief. Their culture belief sometimes is the cause. Sometimes it’s peer pressure. Sometimes it could be as a result of not feeling the need to have spectacles on. And we also find that some have actually developed coping skills. So even with large uncorrected refractive errors, they are able to carry on life, at least to some extent.
253.5
And they think that that is fine. So we still have a lot to do. I would say no, spectacles are not accepted to a large degree.
263.6
SPEAKER 1: Anne, thank you for summarising such a huge and vast topic of uncorrected refractive errors. The points that you’ve raised, the challenges, the barriers– they cannot just be seen in Africa. We see them globally. So if there were three key messages that you would say are necessary in terms of prioritising refractive error services that are more local, district level, what would you say those are? DR.
288.7
ANNE EBRI: Nigeria is ready to deploy optometrists at the primary eye-care level. So if I have three take-home messages, I would mention one, that quantified, skilled personnel should be at all the levels of care, including the primary eye-care level. And the second would be to invest in health education and promotion, targeting the barriers that have stood against the optical spectacles. And then the third would be to recognise that the government and everyone needs to recognise that refractive error is a disability that can be treated and therefore should be part of the national insurance scheme.
341.3
SPEAKER 1: Thank you, Anne, for summarising that for us. It’s been very informative, and it’s helped to raise some key points that are needed in terms of overcoming the correction of refractive errors. DR.
353.7
ANNE EBRI: It’s my pleasure.

Human resources in optometry is a key challenge in many countries within Africa. This is both in terms of numbers and distribution. As you watch the video interview between Priya and Anne, try to reflect on the situation in your own local setting. How can optometry training be aligned to bridge the gaps in service provision?

The true size of Africa 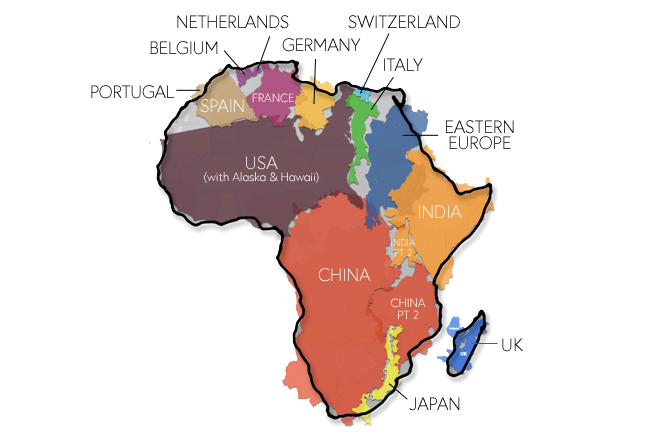 Acceptance of spectacle correction remains a challenge. What are the various beliefs and barriers that you have encountered?

Human resources in eye care are essential but limited in many parts of the world. To deliver good eye health to schoolchildren can we use technology to make a difference? This presentation and YouTube video show how schools in Kenya are using Peek mobile technology to screen and refer children with vision problems to the local eye unit for examination and treatment. What local challenges would you face implementing this solution? Could it be an option in your setting?